Reporting from Cuba, a place frozen in time yet full of potential

Deciding to go was the easy part. I’d been looking for an opportunity to get to Cuba for a long time, for all the obvious reasons: the history, the politics, the culture, the place, the fact of it being — the cliché is true — so close and yet so far away. The announcement in December by Presidents Obama and Raoul Castro that the U.S. and Cuba would move toward normalizing relations provided the big, history-in-the-making reason to go. The Havana Biennial, an international art festival, offered the immediate “peg,” something to hang our hats on for our own planning and, importantly, for the Cuban press office. It’s still not easy to visit Cuba. Most tourism is banned under the U.S. embargo and Americans who wish to visit the island must qualify under one of 12 categories of licensed travel, including so-called educational people-to-people trips. (These have become ever more popular, the definitions ever more expansive. We met a tour leader who was hoping to set up a yoga trip.) 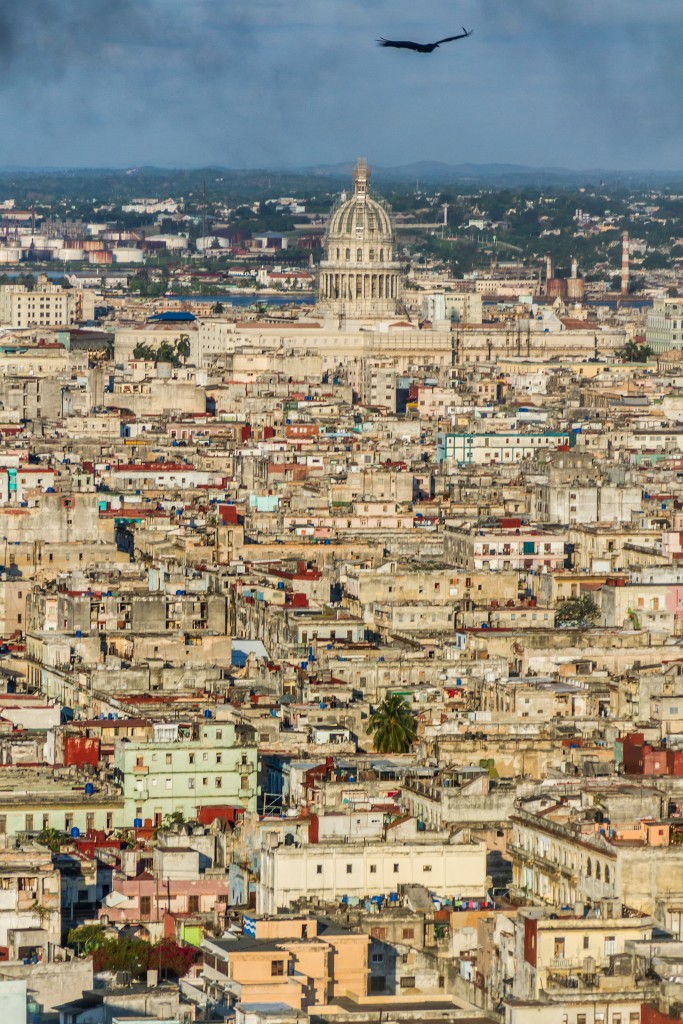 Once the seat of the Cuban government, since 1959 El Capitolio has housed the Cuban Academy of Sciences. Photo by Frank Carlson

Our group — me, producers Merrill Schwerin and Frank Carlson, cameraman Steve Mort — was traveling as journalists, requiring special visas from the Cuban press office. That process took time, lots of it. Merrill stayed in constant contact — rather, I should say, she tried to stay in constant contact — with the Cuban Interests Section in Washington, D.C. We were required to lay out the stories we intended to pursue, the people we wanted to interview. We were given positive early signs but then long silences. We weren’t sure the trip would happen — until we were, just a few weeks before we left. It’s still not clear to me if the delayed response was purely bureaucratic or something else.

In Cuba, as in many other countries we visit, we worked with a local producer, a “fixer,” (we’ll have more from him this week, when he gives us his “tour” of Havana) who helped arrange things on the ground, from the logistics of hotels and cars to setting up interviews. Our fixer was extremely friendly and helpful. We were also aware that he was in contact with the government press office. Again, this is not entirely unusual. But it meant we had to take some care in what we did.

The pluses of reporting from Cuba? It’s visually stunning, the layers of time all there before you in Havana’s crumbling buildings. With so few vehicles, it’s an easy city to move through. And those 1950s cars, of course! The “frozen in time” feel — all real. It’s fascinating to be in a commercial-free zone — no chain stores, no ads, few signs — without the visual clutter of so much of our lives. Then there are the people, universally friendly, who we met along the way and who became part of our stories — the human dramas within the larger political, economic and cultural drama that is unfolding. For a reporter, a rich country, indeed. Not in wealth, but in everything else. 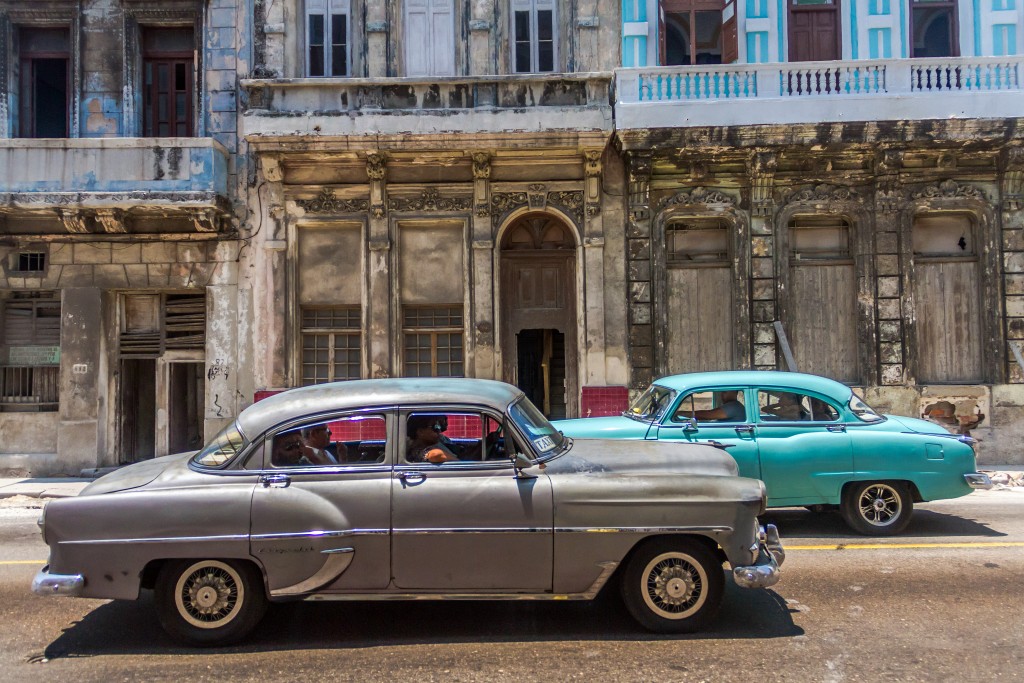 Old cars pass buildings falling apart near the Malecon in Havana. Cuba is truly a place “frozen in time.” Photo by Frank Carlson

The minuses? There’s the heat, high 90s every day we were there. There’s the lack of internet connections. Frozen in time, right? A time before the internet and international cell phone service, for the most part. International hotels are one place where service is available, at a high cost. At ours, you bought time and could sit in a lounge on the second floor (not your room or elsewhere) to use it. No international banks, so American credit cards are useless here — this is a strictly cash economy. And there are few of the amenities international travelers are used to, including air conditioning. Let me be clear: these were inconveniences for us, real problems for Cuban’s citizens. Many spoke to us of the feeling of isolation and the lack of resources available to them. So many intelligent, energetic, get-it-done-whatever-the-obstacles people — it is painful to see so much potential being stymied in so many ways. 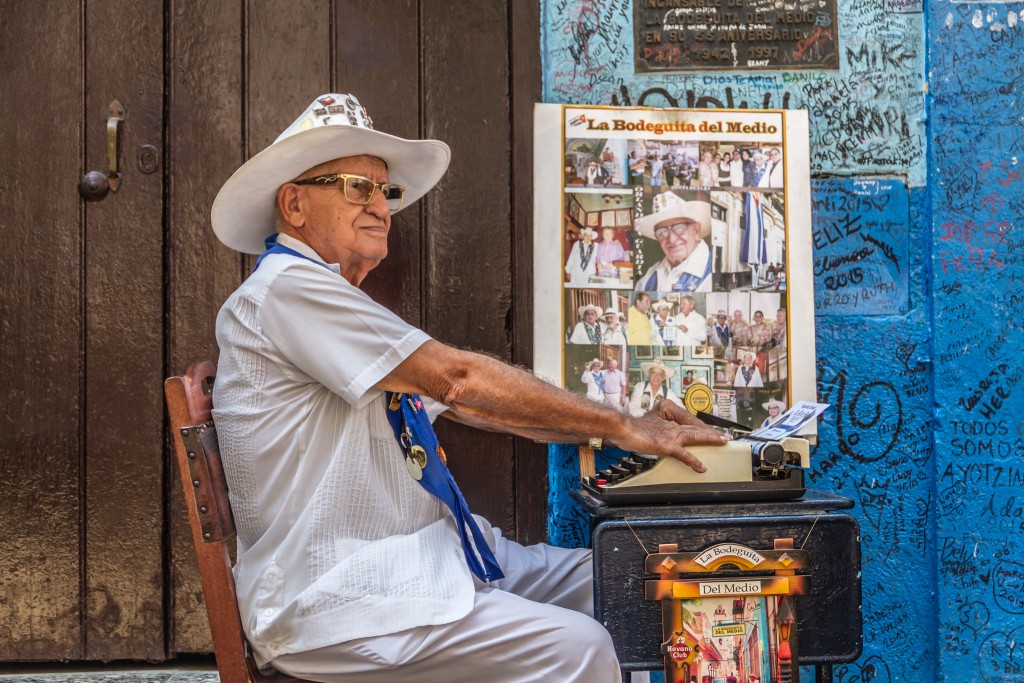 There is also the continuing presence of the state in the daily lives of people. We met the artist Tania Bruguera, who’d been detained, her passport taken, for trying to stage a performance piece in which average citizens could speak their minds. We also met 26-year-old Manuel Mons, a member of a dissident group called “Somos Mas,” who told us that “thinking differently is actually illegal in this country.” As we spoke to Mons, two police cars watched. He was quite aware of it, still ready and willing to speak with us. It was, in fact, the only time in our week in and around Havana that we were aware of any overt surveillance or police presence. Much has clearly changed here, we were told over and over again. And we saw it for ourselves — as we note in one of our reports: more American flags than images of Fidel Castro. But some things, the country’s critics and opponents will note, haven’t changed enough.