As I arrived in Sana’a city late at night on June 6, the few working street lights cast a glow over the closed doors of shops, trash on the streets, and the earthen color of the buildings. All so familiar. Driving past the enormous Saleh Mosque — a major landmark in the capital — the sign now read “the people’s mosque” in Arabic. Yemen’s former, long-time dictator Ali Abdullah Saleh, had turned against the Houthi rebels occupying this city in December and paid with his life. All visible reminders of him have been removed. 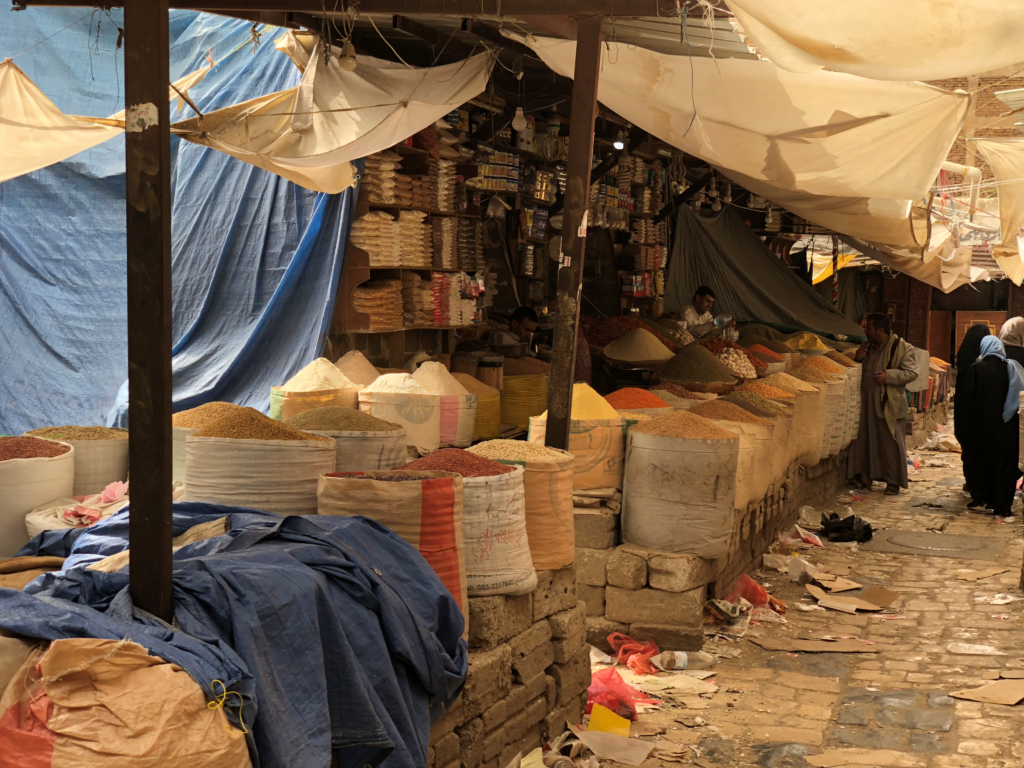 Old Sana’a spice market. The city is a protected UNESCO world heritage site, but has been damaged by the bombing campaign. Photo by Jane Ferguson

It had been three years since I was last in Yemen, my longest absence in the 10 years I’ve been coming to this remarkable country. Visas had arrived and expired several times as journalists were banned from flights into Sana’a. The Saudi-led coalition controls the air space, and the passengers allowed on the United Nations flights in and out of the capital. The roads from the south of the country, which it also controls, are peppered with military checkpoints blocking reporters from Houthi-rebel held areas. Yemenis travelling between both sides of this conflict are quizzed about who they are and why they are travelling.

Yemen was always poor, but now it has fallen off a cliff.

My fixers and I had considered many different ways of getting into this city from hopping on a bus to traveling with a camel caravan, even taking a snaking route from the east with Bedouin smugglers. In the end, we settled on driving north dressed in a full Islamic face veil. We would simply hope that the soldiers did not ask about my ID papers. Traditional custom in Yemen often prevents officials from personally addressing women they don’t know. There was no way I could bring my male cameraman, so I would have to hire a local crew once inside.

Crossing the front lines was a simple, silent drive. A slight hum of tension gripped the inside of the car as everyone fell quiet watching the surrounding countryside. As the more formal, uniformed checkpoints ended, some heavy weaponry and a tank could be seen tucked into the hillsides around us before we reached the rebel checkpoint. Questions were asked and answered and we drove on. We had crossed over. I would now have to wait for my Sana’a contacts to arrive and drive me north. 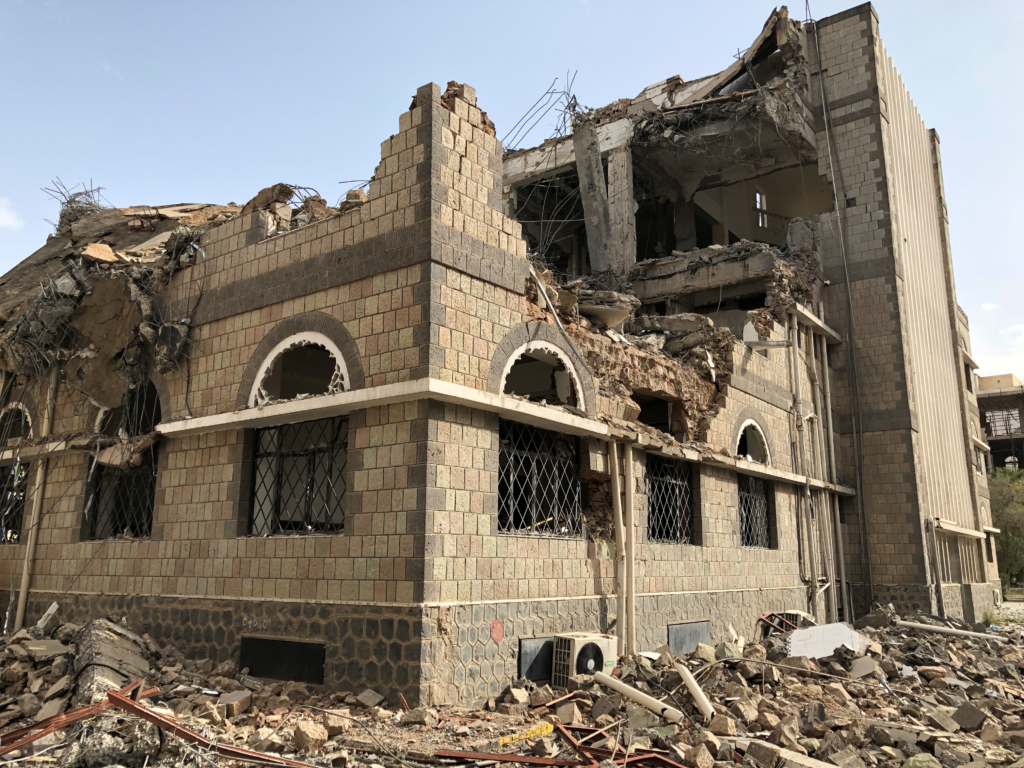 The presidential office in Sana’a, Yemen, bombed in May 2018. Photo by Jane Ferguson.

When they did, they came heavily armed. My driver, who I have known and trusted for years, showed up in combat camouflage jacket, an AK-47 over his shoulder and a pistol strapped to his waist. The area is tightly controlled by the Houthi rebels and I had their permission to be there, but Yemenis have grown cautious of trusting anything as safe these days.

In Sana’a’s streets, there are beggars everywhere. Thin hands paw at car windows and children with dirty rags pretend to clean cars before making eye contact with drivers and raising their hands to hungry mouths. Yemen was always poor, but now it has fallen off a cliff.

The beggars continue when you drive out into the countryside. The winding roads that snake through the mountains are dotted with ragged children holding their hands out. Groups of them carry shovels and dump dirt into potholes until coins are tossed out of cars and they scramble through the dirt shoulder-to-shoulder to collect them.

The hospitals do have a presence of Houthi rebels. Rebel posters were pasted onto the walls of Hajja’s main government hospital, and permissions were needed to enter. Every doctor was closely watched when doing interviews. They looked nervous and exhausted. Many of the doctors had stopped receiving their government salaries back in 2016, but the United Nations’ UNICEF organization stepped in, keeping the malnutrition wards staffed at least. 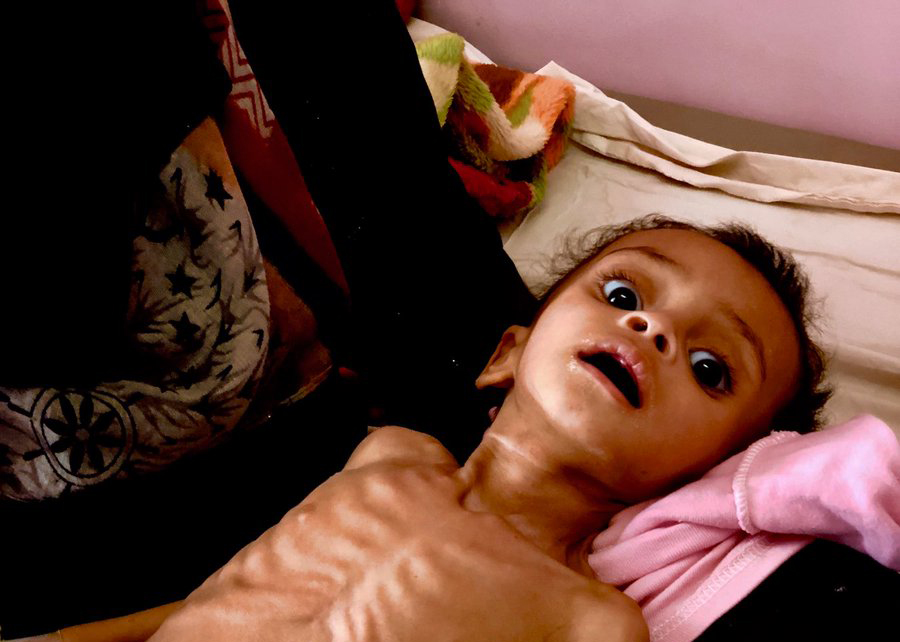 10-month-old Matea was brought to Sabaeen Hospital in Sana’a by her mother, suffering from malnutrition. Her 3-year-old sister had died two weeks earlier. Photo by Jane Ferguson

Once inside, there is an unnerving quiet to the children’s ward. The healthier babies cry, but many just stare blankly. It’s not immediately clear if their eyes look too big or their faces too small. Malnourishment can have very few tell-tale signs to an untrained eye — perhaps just a paleness, a smallness. As the scale continues, some children have lost hair or had their hair turn orange, some have swollen bellies, or no belly to speak of, or bones sticking out through wilted skin. Some of them have aged faces, with skin that wrinkles when they cry.

The healthier babies cry, but many just stare blankly.

Their parents have exhausted all “coping mechanisms” as the aid organizations would say. To you or I, that’s anything we would turn to if a salary suddenly stopped: savings, relatives, a cow or some chickens in the backyard, a line of credit at the local grocery store. After three years of war, most people have exhausted all of those. Sweet tea and bread is keeping an untold number of people here alive, barely. It’s especially tough on the babies as mother’s cannot produce enough high nutrient milk when they themselves are not eating nearly enough.

When we gently approached parents in the hospital wards, sitting helplessly next to their skeletal children, it’s hard to think of any other way to ask, “What happened?” At first, many say they have no problems, there is plenty of food in their homes and they have no idea why the babies got so sick. “Fakhir,” Arabic for pride, runs deep amongst Yemenis. After a few moments they would then tell us the same story every single parent did: The man of the house lost his job or stopped getting paid. With no money coming in they can only really afford to eat once a day, and it’s never a proper meal. 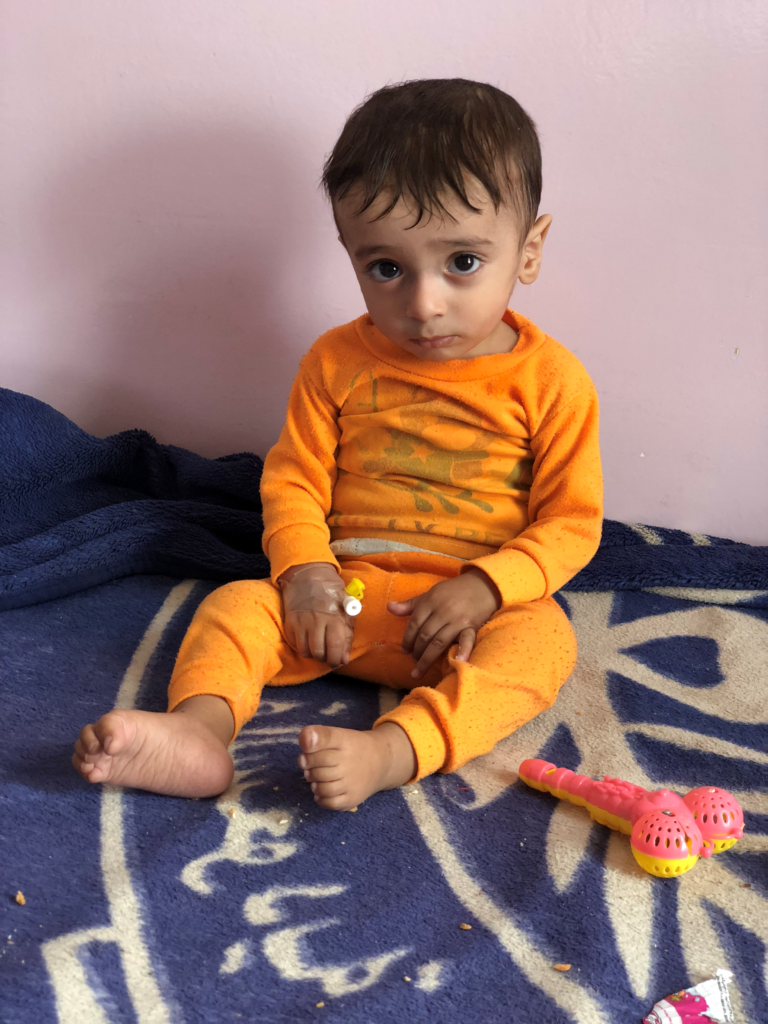 A child in the malnutrition ward of the Sabaeen Hospital in Sanaa. Photo by Jane Ferguson

The children are often with their mothers, women covered head to toe in the traditional black clothing women in Yemen wear. It’s impossible to tell how thin they too are, save for bony fingers reaching out from their sleeves.

Yemen was always vulnerable to shocks in food prices and supplies. The double-edged sword of widespread poverty and the reality that the country imports almost all of its food, has left millions at risk. The war has not stopped food coming into the country; there is plenty making it in despite the Saudi blockade that holds up shipments and helps push up prices. The real crisis here is an economic one: people simply cannot afford to buy the food. The livelihoods of millions have disappeared and the middle classes, too, are falling deeper into poverty.

As I wandered around Sana’a’s spectacular old city, a UNESCO World Heritage Site, there were reminders that people here once enjoyed making a living from tourism. The rusting sign of an old tourist hotel still hangs, lopsided, from an ancient building. Europeans especially used to come in tour groups to marvel at the archeological riches and unique Yemeni culture. It now seems wildly optimistic that anyone could wander down this street on their vacation. Now closed off from the outside world, Yemen will suffer quietly in hospital wards and country roadsides until this hellish war comes to an end.