6 p.m. ET | Interim Libyan government officials said Gadhafi’s son and former national security adviser Muatassim was killed in Sirte, and another son, Seif al-Islam, was wounded and in a hospital.

4:43 p.m. ET | Check out a new slideshow of images from Libya’s revolution:

3:30 p.m. ET | Lindsey Hilsum, reporting in Tripoli for Independent Television News, told us fighters found an injured Moammar Gadhafi hiding in drainage pipes in Sirte and pulled him out alive. She said an 18-year-old fighter reportedly claimed to have shot Gadhafi.

The National Transitional Council said it would have to investigate the matter before determining the cause of death, said Hilsum. Doctors said he died of wounds to his head and chest, she added.

Hilsum described the mood in Tripoli as “joyful” with some firing their weapons into the air and people shouting “Allah akbar” or “God is great.”

Some Libyans told her they would have wanted to see Gadhafi put on trial and admitting to his crimes, but others said they just wanted him gone.

We’ll have more from Hilsum on Thursday’s broadcast.

President Obama: ‘End of a Long and Painful Chapter’

President Obama said Gadhafi’s death “marks the end of a long and painful chapter for the people of Libya” and said it was a “momentous day in the history of Libya. The dark shadow of tyranny has been lifted.”

“For four decades the Gadhafi regime ruled the people of Libya with an iron fist,” he said.

He called on Libya’s leaders to quickly form an interim government and pave the way for elections.

President Obama is schedule to speak at 2 p.m. ET from the White House Rose Garden. We’ll have it live here on The Rundown. In New Hampshire, Vice President Joe Biden said Libya had “gotten rid of a dictator.” Secretary of State Hillary Clinton, who did not confirm his death, called the news a “new opportunity for Libya to move forward to the future.”

This video purports to show a captured Gadhafi while still alive. Video on Arab TV stations showed he was captured alive and wounded, the AP reports. 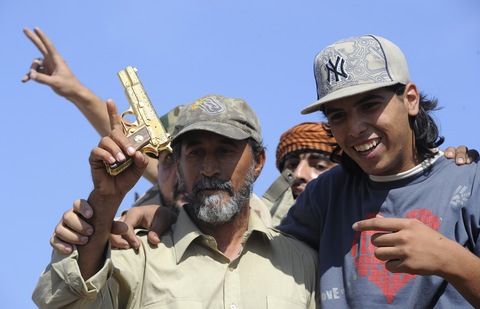 Libyan National Transitional Council fighters hold what they claim to be the gold-plated gun of ousted leader Moammar Gadhafi at the site where he was allegedly captured Thursday in Sirte. Photo by Philippe Desmazes/AFP/Getty Images. 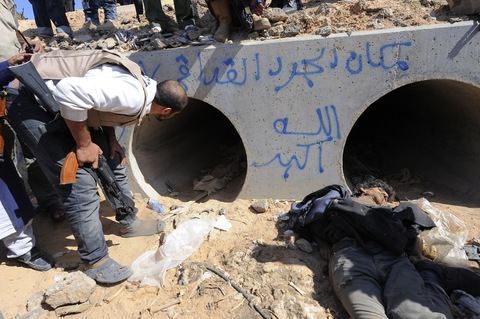 A Libyan National Transitional Council fighter in Sirte looks through a large concrete pipe where ousted leader Moammar Gadhafi was allegedly captured Thursday. A the body of a dead loyalist gunmen is at right. Arabic graffiti in blue reads: ‘This is the place of Gadhafi, the rat. God is the greatest.’ Photo by Philippe Desmazes/AFP/Getty Images.

U.N. Secretary-General Ban Ki-moon said “this day marks an historic transition for Libya” but added that now “[c]ombatants on all sides must lay down their arms in peace.” 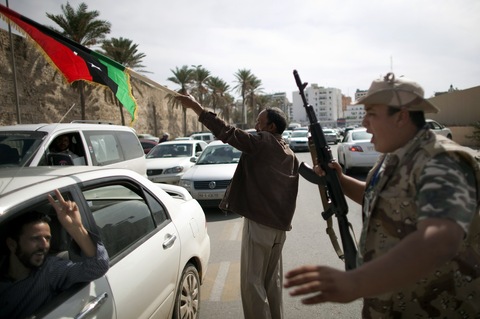 Prime Minister Mahmoud Jibril confirmed reports of Gadhafi’s death at a news conference in Tripoli. “We have been waiting for this moment for a long time. Moammar Gadhafi has been killed,” he said.

(Read an obituary from the Economist, looking back at the man who “ruled unsparingly” in Libya.)

Information Minister Mahmoud Shammam told the Associated Press that “[o]ur people in Sirte saw the body.” Prime Minister Mahmoud Jibril is scheduled to hold a news conference on the situation at 10 a.m. ET.

Original post: | As Moammar Gadhafi’s stronghold of Sirte fell Thursday, there were unconfirmed reports that the deposed leader had been killed or captured — reports that NATO and Libyan officials were working to confirm. NATO did confirm hitting two pro-Gadhafi vehicles in an airstrike. 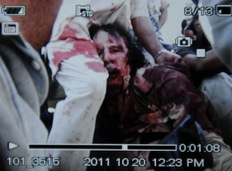 According to the Associated Press,

The Misrata Military Council, one of multiple command groups for revolutionary forces, said its fighters captured Gadhafi. Another commander, Abdel-Basit Haroun, says Gadhafi was killed when an airstrike hit a convoy trying to flee.

The spokesman for Libya’s transitional government, Jalal al-Gallal, and its military spokesman Abdul-Rahman Busin said the reports have not been confirmed.

(Read a timeline of Gadhafi’s 42 years in power).

Libyan forces took control of the Gadhafi bastion of Sirte after weeks of intense fighting after the fall of Tripoli in August that had hampered the National Transitional Council’s efforts to consolidate control of the country. The fall of Sirte caps months of fierce battles.

News of the fall of Sirte and rumors of Gadhafi’s capture or death spurred celebrations in the streets of Sirte as fighters fired their guns into the air, burned the green flag of Gadhafi’s regime and chanted “Allah akbar” (“God is great”).

Rebel fighters first launched a fight against Gadhafi’s regime after protests broke out in February, following mass demonstrations in Tunisia and then Egypt. In March, the U.N. Security Council established a no-fly zone, paving the way for NATO airstrikes and months of back-and-forth battles for territory.

An image captured off a cell phone camera reportedly shows the arrest of Libya’s strongman Moammar Gadhafi in Sirte on October 20, 2011. Photo via Philippe Desmazes/AFP/Getty Images.

Photo of celebrations in Tripoli by Pascal Le Segretain/Getty Images.