WASHINGTON — President Donald Trump thanked North Korean leader Kim Jong Un on Friday for “fulfilling a promise” to return the remains of U.S. soldiers missing from the Korean War, as a U.S. military plane made a rare trip into North Korea to retrieve 55 cases said to contain remains.

North Korea’s move signals a positive step in Trump’s diplomacy with Pyongyang, and may restart efforts to send U.S. teams into the country to search for additional war dead.

Defense Secretary Jim Mattis cautioned that the transfer of remains “is separate” from what has so far been troubled efforts to negotiate the complete denuclearization of North Korea. But he said it was a step in the right direction following the Trump-Kim summit in Singapore.

“This is obviously a gesture of carrying forward what they agreed to in Singapore and we take it as such,” Mattis told reporters Friday. “We also look at it as a first step of a restarted process. So we do want to explore additional efforts to bring others home.”

Despite soaring rhetoric about denuclearization before the Singapore meeting, the summit ended with only a vague aspirational goal for a nuclear-free Korean Peninsula without describing when and how that would occur.

Subsequent talks between U.S. Secretary of State Mike Pompeo and senior North Korean officials got off to a rocky start earlier this month, with the North accusing the Americans of making “unilateral and gangster-like” demands on denuclearization. On Wednesday, Pompeo said a great deal of work remains ahead of a North Korea denuclearization deal, but he declined to provide any timeline. 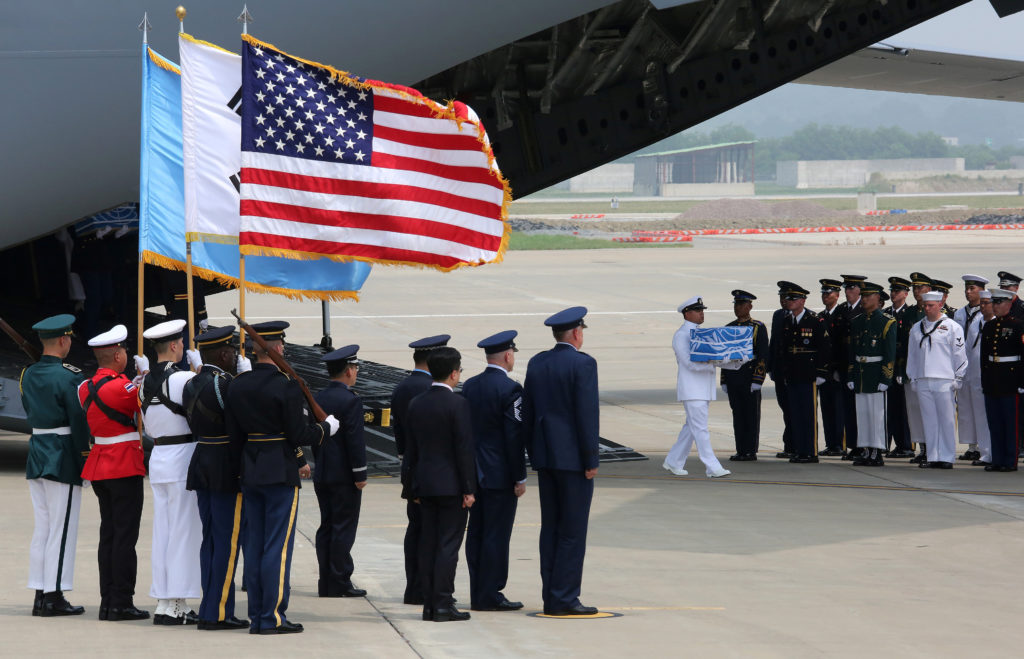 A U.N. honor guard carries a box containing remains believed to be from American servicemen killed during the 1950-53 Korean War after it arrived from North Korea, at Osan Air Base in Pyeongtaek, South Korea, Friday, July 27, 2018. Photo by Ahn Young-joon via Reuters

Trump, addressing reporters on the South Lawn, said Vice President Mike Pence would greet the families and the remains of the soldiers.

“We have many others coming, but I want to thank Chairman Kim in front of the media for fulfilling a promise that he made to me, and I’m sure that he will continue to fulfill that promise as they search and search and search,” Trump said.

“These incredible American heroes will soon lay at rest on sacred American soil,” he added.

Pence, the son of a Korean War combat veteran, said in a statement that he will participate in the ceremony when the remains arrive in the U.S. United Nations Command said the remains will be flown to Hawaii immediately after a full honors ceremony in Seoul on Wednesday.

“It is deeply humbling to be part of this historic moment,” Pence said. “We will never forget the sacrifices these brave service members and their families made for our nation and our freedoms.”

Early Friday morning in Korea, a U.S. Air Force C-17 transport plane made a rare trip into North Korea to retrieve 55 cases of what are believed to be remains from the Korean War. The aircraft then flew from Wonsan to Osan Air Base in Pyeongtaek, near the South Korean capital of Seoul.

At the air base, U.S. servicemen and a military honor guard lined up on the tarmac to receive the remains, which were carried in boxes covered in blue U.N. flags. Officials in North Korea had no comment on the handover, which came on the 65th anniversary of the end of the Korean War.

Once the cases arrive in Hawaii, a series of forensic examinations will be done to determine if the remains are human and if the dead were American or allied troops killed in the conflict.

Mattis underscored that looming question, saying “we don’t know who’s in those boxes.” But he said the gesture is important for families of the fallen, which could include any of the allies that also fought in the war.

“We have families that when they got the telegram, have never had closure,” Mattis said. “They’ve never gone out and had the body returned.”

More than 36,000 U.S. troops died in the conflict, including those listed as missing in action.

The repatriation of remains could be followed by stronger North Korean demands for fast-tracked discussions to formally end the war, which was stopped with an armistice and not a peace treaty. South Korea’s Defense Ministry also said the North agreed to general-level military talks next week at a border village to discuss reducing tensions across the countries’ heavily armed border.

The remains are believed to be some of the more than 200 that North Korea has held in storage for some time, and were likely recovered from land during farming or construction. The vast majority of the war dead, however, have yet to be located and retrieved from cemeteries and battlefields across the countryside.

Efforts to recover American war dead had been stalled for more than a decade because of a standoff over North Korea’s nuclear program and a previous U.S. claim that security arrangements for its personnel working in the North were insufficient.

Washington has said Pyongyang wouldn’t get sanctions relief and significant security and economic rewards unless it firmly commits to a process of completely and verifiably eliminating its nuclear weapons. There are lingering doubts about whether Kim would ever agree to fully relinquish his nukes, which he may see as a stronger guarantee of survival than whatever security assurance the United States could offer.

Left: United Nations Command Chaplain U.S. Army Col. Sam Lee performs a blessing of sacrifice and remembrance on the 55 boxes of remains thought to be of U.S. soldiers killed in the 1950-53 Korean War, returned by North Korea to the U.S., at the Osan Air Base in South Korea, July 27, 2018. Photo By U.S. Army Sgt. Quince Lanford via Reuters