BAGHDAD (AP) — A top U.S. commander said on Monday mortars were used in an attack on the American embassy in Baghdad that injured one person and caused some material damage the previous night, not katyusha rockets as was initially reported by staffers and a statement from the military.

Gen. Frank McKenzie, a top U.S. commander for the Middle East, told reporters traveling with him that the mortar attack started a fire that was put out. He said no U.S. military members were injured, but that one U.S. national received a minor injury but has returned to work.

The two staff members of the U.S. Embassy in Baghdad, who spoke on condition of anonymity because they were not authorized to brief the media, said initially it had been rockets that slammed into a restaurant inside the American compound.

The U.S. Embassy is within the Iraqi capital’s Green Zone, and has been a flashpoint amid wider regional tensions between the U.S. and Iran, which have played out inside Iraq in recent weeks. Iraqi supporters of an Iran-backed militia stormed the embassy compound on Dec. 31, smashing the main door and setting fire to the reception area.

Violence between Iraqi security forces and anti-government protesters also continued to seethe overnight, with one protester shot dead in a violent crackdown in the country’s south. Unrest was also ongoing in the capital, with new clashes erupting Monday near the central Khilani and Wathba squares, where security forces fired tear gas and live bullets to disperse crowds.

At least 22 protesters were wounded, five due to live fire, security and medical officials said. The officials spoke on condition of anonymity in line with regulations.

Security forces also chased after demonstrators and beat them. 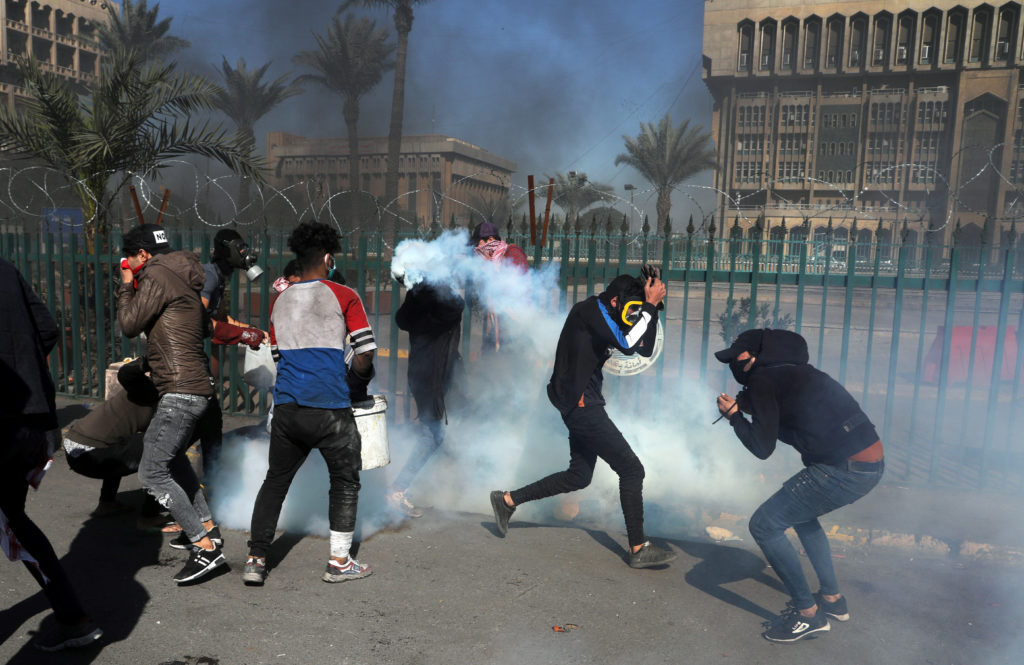 A member of the security forces overpowered a female anti-government protester, dragged her by the hair and pinned her down outside Baghdad’s municipality building. The incident, captured by an Associated Press photographer, was a rare occurrence in the largely male-dominated front-lines of the demonstrations.

The security personnel conducted a search of the female protester and tore off a protective face mask she was wearing as a witness threw stones.

Iraq has been roiled by over four months of demonstrations over government corruption, high unemployment and Iranian influence in Iraqi politics. Security forces have killed at least 500 protesters. The country is also facing a political clash over naming the next prime minister, after Prime Minister Adel Abdul-Mahdi resigned.

An initial military statement said at least five katyusha rockets had landed inside the Green Zone late Sunday. It was the third attack targeting the U.S. Embassy this month, and the perpetrators were not immediately known. Perpetrators had used katyusha rockets in previous attacks and caused no injuries.

There was no claim of responsibility for any of the attacks. But the U.S. has accused Iran-backed militias of targeting U.S. interests by attacking military bases housing Americans and diplomatic missions.

Abdul-Mahdi condemned the attack in a statement, asserting Iraq’s commitment to protecting diplomatic missions in the country.

In the south, a protester was killed amid a violent pre-dawn crackdown by security forces on a protest camp in the city of Nasiriyah, an activist and a medical official said. The official spoke on condition of anonymity in line with regulations.

Police fired live rounds to disperse crowds from a central square in Nasiriyah where protesters were staging a sit-in, prompting demonstrators to flee. The encampment site was later burned. It was not immediately clear whether security forces or unknown groups had torched it. The city has been a center of unrest since the protests began.

Left: A general view of the U.S. Embassy at the Green zone in Baghdad, Iraq January 7, 2020. Photo via Reuters