The leader of Romania’s ruling center-left coalition said Monday the government won’t resign following the biggest demonstrations since the end of communism against a measure that would ease up on corruption.

There were signs, however, that the government may not push ahead immediately with a measure to decriminalize official misconduct — which ignited the protests.

Prime Minister Sorin Grindeanu acknowledged that “the act had led to division,” and suggested he may fire the justice minister later this week.

Unrest continued in Monday evening, with hundreds of government supporters massing outside the presidential palace in the Romanian capital blaming President Klaus Iohannis for the crisis. The president has strongly opposed the measure.

Elsewhere, protesters began gathering outside the government offices for the seventh consecutive evening in Victory Square, the site of the biggest protests Romania has had since communism was overthrown in 1989. 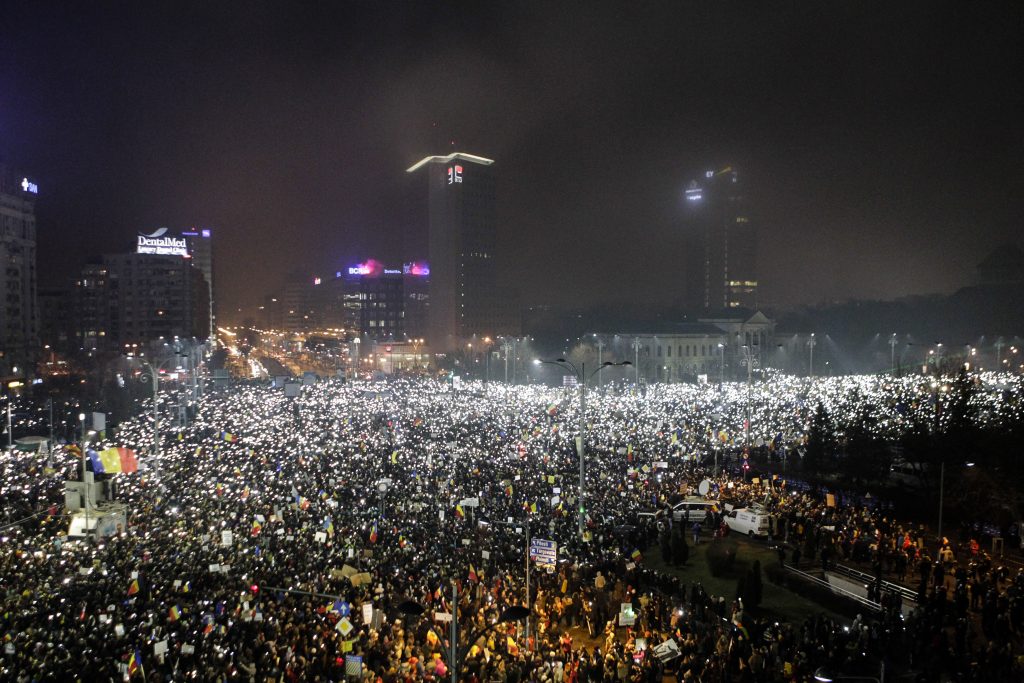 Protesters use phones and flashlights during a protest Feb.5 in Victoriei Square, in Bucharest, Romania. Inquam Photos/Adriana Neagoe/via Reuters.

Social Democratic chairman Liviu Dragnea emerged from a morning meeting with governing partners Monday saying that “we unreservedly expressed our support for the government … and the prime minister.”

On Sunday, the government backed down following six days of street protests from an emergency ordinance that would decriminalize abuse in office by officials if the amount involved was less than about $48,500. It plans to introduce another version of the law in Parliament, where it has a majority.

However, in a sign of second thoughts, Justice Minister Florin Iordache later said in a statement he was “not preoccupied” with drawing up a draft law.

“Currently, the justice minister is focusing on the decisions published by the Constitutional Court…which will be analyzed in the near future,” the statement said.

The Constitutional Court is expected to rule on the constitutionality of the decriminalizing proposal later this week.

Dragnea, the major power broker in the government, is banned from being prime minister because of conviction in April 2016 for vote rigging.