Royal Marriages: Not Long Ago, They Meant Something

There was a time, decades before royal weddings were televised spectacles to entertain vast audiences, that such unions really mattered in the destiny of nations and influenced the course of wars and diplomacy.

As long as there have been dynasties, they’ve married each other for political advantage and territorial gain. Just think back to the Habsburgs, who ruled much of Central Europe for centuries, and their motto, “tu felix Austria et nubia” (Be happy Austria and marry). But surprisingly, even into the 21st century one only needs to go back five generations in Prince William’s family to see how the decisions of what royal house should marry into the next royal house had real impact beyond the ceremonial. 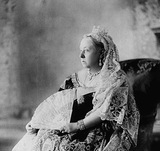 And although coverage of this royal wedding, especially in the British media, focuses on Kate Middleton’s family lineage of three generations of coal miners, the great-great-great-great-grandmother that really counts is Queen Victoria, who reigned from 1837 to 1901. She and her German consort, Prince Albert of Saxe-Coburg and Gotha, produced nine children, and the consequences rippled through the tumultuous history of Europe well into modern times.

Indeed, dynastic marriages and arrangements, so symbolic of an old Europe, were at the heart of a conflict that brought about its end — World War I from 1914 to 1918. Three of the major warring nations — Britain, Germany and Russia — were ruled by two grandsons and a grandson-in-law of Queen Victoria. By war’s end, only the British monarchy would remain.

Victoria and all those royal children have been the subject of countless books, among them two on royal imagery by writer and royal historian Eric Lowe. Hold on, because it can get a bit complicated trying to remember who was marrying whom and what happened next.

Victoria’s eldest, also named Victoria but called Vicky, married the Crown Prince of Prussia, Friedrich Wilhelm, who became Friedrich III, one of Germany’s rare liberal rulers. (Under British practice, the eldest daughter does not automatically become Queen but is outranked by younger brothers, a practice that could well end if Kate and William’s firstborn is a girl). But Friedrich died of cancer 99 days after taking the throne of a recently unified Germany, and their son, King Edward VII. The playboy Prince of Wales, who indulged many appetites, turned into an effective monarch, the symbol, if not the architect, of Britain’s pre-World War I alliance with France known as the Entente Cordiale.

As royal writer Lowe said: “Edward was a peaceful man and thought he could maintain peace in Europe by containing the ambitions of his cousin Wilhelm. He did not count on Wilhelm’s irrationality.”

Edward died in 1910 and left his son George V, grandfather of the present Queen, to preside over a war his father could not have foreseen. Edward’s funeral, immortalized for Americans in the opening chapter of Barbara Tuchman’s best-selling “The Guns of August,” was the last great gathering of European royalty when they ruled over much of the world. 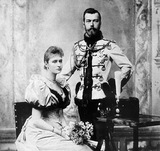 Nicholas and Alexandra were murdered during the Bolshevik revolution.

The third child, Alice, married the German Duke of Hesse. A daughter from that marriage married the Tsar of Russia, forming the famed and tragic couple, Nicholas and Alexandra. They and their children met a bloody end in the Bolshevik revolution. British royals refused to visit Russia until after the collapse of communism. It was a gesture of anger and contempt that pre-dated and outlasted the Cold War, even as British prime ministers frequently visited Moscow to negotiate with Lenin’s political heirs.

And the youngest daughter, Princess Beatrice, is connected to a moment that led to the outbreak of World War II. Her daughter married the King of Spain, who was exiled when that country briefly became a republic in the early 1930s. That event helped precipitate the Spanish Civil War, which most historians regard as the dress rehearsal for World War II.

Now, a future British monarch is ready to wed not a European royal but the daughter of a self-made English couple, whose climb from humble origins to millionaire gentry is more in the spirit of American — rather than British — myth. Should the British monarchy survive into a William reign or beyond, the royal family will have none of the influence and power exercised by Queen Victoria and some of her brood.

But watching from the front pew of the groom’s side of Westminster Abbey will be the last remaining British royal couple with intertwined links from Victoria’s progeny. Both Queen Elizabeth II and Prince Philip (great-grandson of Victoria’s daughter Princess Alice and son of Prince Philip of Greece) are great-great-grandchildren of Queen Victoria. We can only wonder if she would have been amused.