MOSCOW — Russia on Saturday announced it is expelling 23 British diplomats and threatened further measures in retaliation in a growing diplomatic dispute over a nerve agent attack on a former spy in Britain.

The Russian Foreign Ministry also said in a statement that it is ordering the closure of the British Council, a government organization for cultural and scientific cooperation, and that it is ending an agreement to reopen the British consulate in St. Petersburg.

It ordered the diplomats to leave within a week.

The announcement followed on the heels of Britain’s order this week for 23 Russian diplomats to leave the U.K. because Russia was not cooperating in the case of Sergei Skripal and his daughter, both found March 4 poisoned by a nerve agent that British officials say was developed in Russia. The Skripals remain in critical condition.

The Russian statement said the government could take further measures if Britain takes any more “unfriendly” moves toward Russia. British Ambassador Laurie Bristow was called to the Foreign Ministry Saturday morning to be informed of the moves.

“We will always do what is necessary to defend ourselves, our allies and our values against an attack of this sort, which is an attack not only on the United Kingdom, but upon the international rules-based system on which all countries, including Russia, depend for their safety and security,” Bristow told reporters after being informed of the expulsions.

“This crisis has arisen as a result of an appalling attack in the United Kingdom, the attempted murder of two people, using a chemical weapon developed in Russia and not declared by Russia at the Organization for the Prohibition of Chemical Weapons, as Russia was and is obliged to do under the Chemical Weapons Convention,” he added. 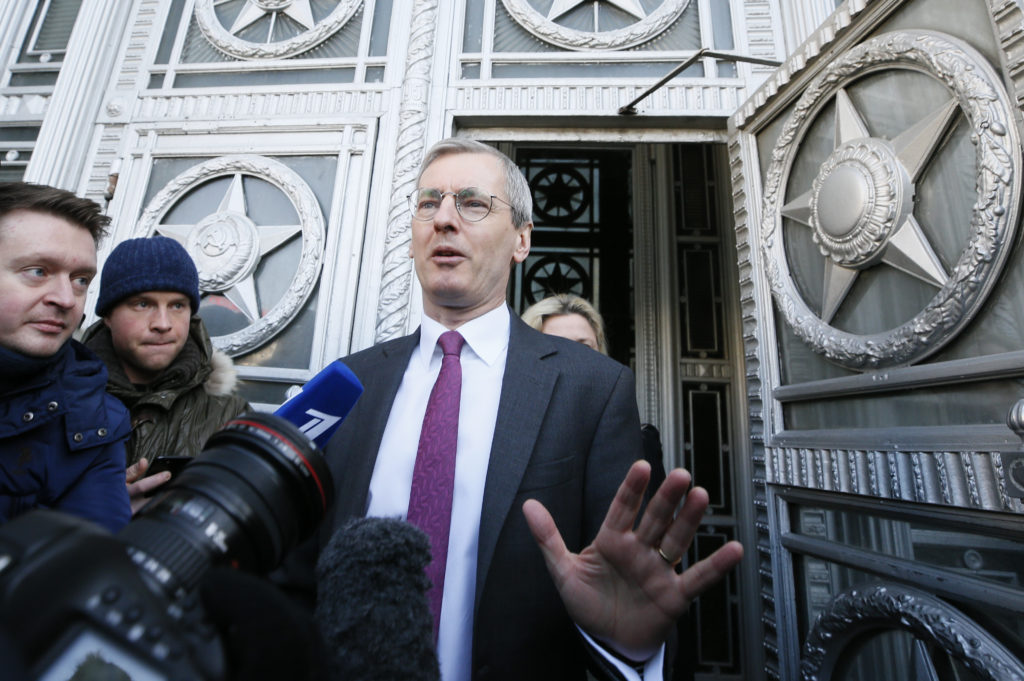 A Russian lawmaker warned Britain against escalating the crisis.

“It is possible that (Britain) will continue to respond; we are ready for this. But London must understand that this will not do anything, it is useless to talk with Russia with such methods,” Dzhabarov was quoted as saying by the state news agency RIA Novosti.

While Russia has vigorously denied involvement in the attack, Western powers see it as the latest sign of alleged Russian meddling abroad. The tensions threaten to overshadow Putin’s expected re-election Sunday for another six-year presidential term.

Meanwhile new tensions have surfaced over the death this week of a London-based Russian businessman, Nikolai Glushkov. British police said Friday that he died from compression to the neck and opened a murder investigation.

British police said there is no apparent link between the attack on Glushkov and the poisoning of the Skripals, but both have raised alarm in the West at a time when Russia is increasingly assertive on the global stage and facing investigations over alleged interference in the Donald Trump’s election as U.S. president.

The source of the nerve agent — which Britain says is Soviet-made Novichok — is unclear, as is the way it was administered. Russia has demanded that Britain share samples collected by investigators.

Top EU diplomats were expected to discuss next steps at a meeting Monday, with some calling for a boycott of the upcoming World Cup in Russia. British Prime Minister Theresa May is seeking a global coalition of countries to punish Moscow.

Jim Heintz in Moscow contributed to this story.

Left: Policemen stand guard near the building of the British consulate-general in St. Petersburg, Russia March 17, 2018. Photo By Anton Vaganov/Reuters