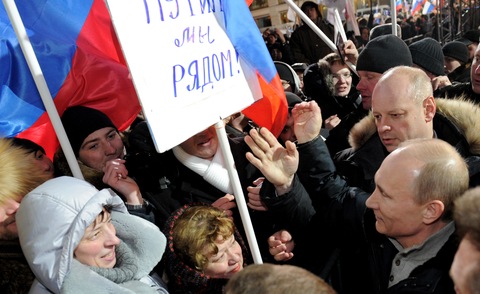 Vladimir Putin greets supporters in a rally outside the Kremlin on Sunday night. Photo by Alexey Druzhinin/AFP/Getty Images.

Russian Prime Minister Vladimir Putin won a six-year presidential term on Sunday, as the opposition and international monitors described the election as flawed. “We won! Glory to Russia,” he told a cheering throng outside the Kremlin.

Putin won more than 63 percent of the vote, higher than the 50 percent needed to avoid a runoff, the Russian Central Election Commission said Monday.

The results were not unexpected. Putin, 59, was favored to win despite a growing opposition to what some perceived as corruption in government and a tainted parliamentary vote in December. He was president from 2000 to 2008.

Putin had web cameras placed in all 90,000 polling sites around Russia in response to the charges of vote-rigging in December’s vote.

The Organization for Security and Cooperation in Europe issued a report Monday saying the vote count was “assessed negatively” in a third of the polling sites its observers visited, but it didn’t cite problems with multiple votes as some had asserted.

“There was no real competition, and abuse of government resources ensured that the ultimate winner of the election was never in doubt,” said Tonino Picula, the head of the OSCE observer mission, reported the Associated Press.

Presidential contestant Mikhail Prokhorov vowed to run again after preliminary results showed he came in third. “I do not consider [the elections] fair, but I have accepted this challenge,” the billionaire told state-run television Channel One, according to RIA Novosti.

Laura Lynch of PRI’s The World blogged over the weekend about the efforts of election monitors to keep the voting clean:

As the day wore on, the monitors in Danilovsky and across Moscow seemed on high alert for abuses. They kept watch for “carousels”, buses that carried the same group of people from poll to poll disembarking to vote again and again and again. I saw no instances of this and (volunteer Masha) Eigmont said she had seen one bus arrive, only to leave again once a colleague filmed the driver. Social media websites reported the “carousel” rides were indeed happening inside and outside Moscow as was Golos, the independent election watchdog group. (Browse all of The World’s Russian Elections 2012 coverage.)

When Putin deputy campaign manager Pavel Zenkovich was asked about so-called “carousel voting,” he said it would be natural if factory managers gave workers a bus to get to polling places at lunchtime. “We need to know, who sent them and for whom. So far, it is only accusations,” he said.

Read Margaret Warner’s account of Election Day developments and watch her tour of a polling station:

We’ll have more about where Russia goes from here on Monday’s NewsHour. In the meantime, view all of our Russian election coverage and follow NewsHour World on Twitter.