CHASIV YAR, Ukraine. (AP) — Dozens of Ukrainian emergency workers labored Sunday to pull people out of the rubble after a Russian rocket attack smashed into apartment buildings in eastern Ukraine. The strike killed at least 15 people and scores were thought to be still trapped a day later.

The strike late Saturday evening hit apartment blocks in a residential quarter of the town of Chasiv Yar, inhabited mostly by people who work in nearby factories. Ukraine’s Emergency Services said Sunday they have rescued five people from the rubble so far and have made contact with three others still trapped alive beneath the ruins.

Cranes and excavators worked alongside the rescue teams to clear away the ruins of one building, its sides completely shorn off by the impact of the strike. The rescuers kept on working in the rain despite the dangerous conditions. The thud of artillery on the nearby front line resonated just a few miles away, making some workers flinch and others run for cover when it got too close.

Pavlo Kyrylenko, governor of the Donetsk region that includes Chasiv Yar, said the town of about 12,000 was hit by Uragan rockets, which are fired from truck-borne systems. Chasiv Yar is 20 kilometers (12 miles) southeast of Kramatorsk, a city that is a major target of Russian forces as they grind westward.

Residents told The Associated Press they had heard at least three explosions and that, in addition to the deaths, many people were badly wounded in the blasts. A group of neighbors sat in the courtyard quietly discussing who was injured and who was still missing.

“There was an explosion, all the windows blew out and I was thrown to the ground. I called my children to tell them I was alive. My kitchen walls and balcony have completely vanished,” said one resident, 45-year-old Oksana, who did not wish to provide her last name.

She struggled to hold back her tears as she spoke. She had been in her third-floor apartment when the missiles struck.

“We didn’t hear any incoming sound, we just felt the impact. I ran to hide in the corridor with my dogs. Everyone I knew started calling me to find out what had happened. I was shaking like a leaf,” said Irina Shulimova, a 59-year-old retiree.

Front doors and balconies were torn apart in the blast, heaps of twisted metal and brick lay on the ground, and crushed summer cherries lay among shattered window panes. 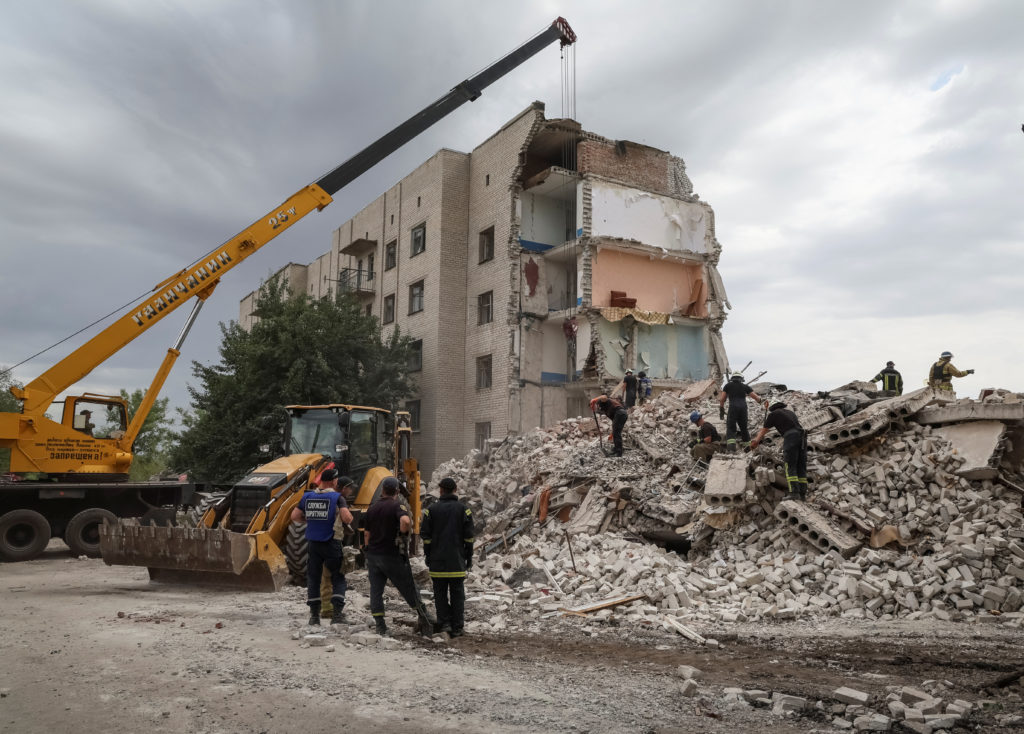 Rescuers work at a residential building damaged by a Russian military strike, amid Russia’s invasion on Ukraine, in the town of Chasiv Yar, in Donetsk region, Ukraine July 10, 2022. Photo by Gleb Garanich/Reuters.

A 30-year-old technology worker named Oleksandr said his mother was among those injured in the explosion.

“Thank God I wasn’t injured, it was a miracle,” he said, touching the crucifix around his neck.

Although the home he shares with his mother is now shattered, he says he doesn’t plan to leave the neighborhood.

“I only have enough money to support myself for another month. Lots of people are fed up already of refugees coming from the east – no one will feed or support us there. It’s better to stay,” said Oleksandr, who declined to give his surname.

Dima, another resident, had lived for more than 20 years on the ground floor of one of the buildings that were hollowed out in the attack. He walked back and forth across the rubble.

Twenty-one people were killed earlier this month when an apartment building and recreation area came under rocket fire in the southern Odesa region. In addition, at least 19 people died when a Russian missile hit a shopping mall in the city of Kremenchuk in late June.

Russia has repeatedly claimed that it is hitting only targets of military value in the war. There was no comment on Chasiv Yar at a Russian Defense Ministry briefing on Sunday.

The Donetsk region is one of two provinces along with Luhansk that make up the Donbas region, where separatist rebels have fought Ukrainian forces since 2014. Last week, Russia captured the city of Lysychansk, the last major stronghold of Ukrainian resistance in Luhansk.

Russian forces are raising “true hell” in the Donbas, despite assessments they were taking an operational pause, Luhansk governor Serhiy Haidai said Saturday.

After the seizure of Lysychansk, some analysts predicted that Moscow’s troops likely would take some time to rearm and regroup.

But “so far there has been no operational pause announced by the enemy. He is still attacking and shelling our lands with the same intensity as before,” Haidai said. He later said Ukrainian forces had destroyed some ammunition depots and barracks used by the Russians.

Left: Rescuers extract a body from a residential building damaged by a Russian military strike, amid Russia's invasion of Ukraine, in the town of Chasiv Yar, in Donetsk region, Ukraine July 10, 2022. Photo by Gleb Garanich/Reuters.