“Of all Boko Haram assaults analyzed by Amnesty International, this is the largest and most destructive yet. It represents a deliberate attack on civilians whose homes, clinics and schools are now burnt out ruins,” said Daniel Eyre, Nigeria researcher for Amnesty International in a statement on their website.

The analysis shows just two of the many towns and villages that fell victim to a series of Boko Haram attacks which began on Jan. 3, 2015.

The images compare the town on Jan. 2 and Jan. 7. Attacks in the area began on Jan. 3, with estimated death tolls ranging from hundreds to 2,000. The Nigerian military has put the number much lower, closer to 150. But Amnesty International has called it possibly the deadliest massacre in Boko Haram’s history that could mark a disturbing and bloody escalation. 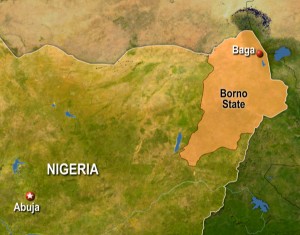 Baga is in the northeastern corner of Nigeria.

According to the report, the town of Baga was severely hit. More than 3,100 structures “were damaged or destroyed by fire affecting most of the 4-square kilometer town. Many of the wooden fishing boats along the shoreline, visible in the images taken on Jan. 2 are no longer present in the Jan. 7 images tallying with eye witnesses’ testimony that desperate residents fled by boat across Lake Chad.”

Because these attacks are happening in remote areas, Boko Haram’s reign of terror has been tough to track. On Tuesday’s PBS NewsHour, Gwen Ifill spoke with Nii Akuetteh of the African Immigrant Caucus on the disturbing reports about young girls being used as bombers and how recent violence will affect Nigeria’s upcoming elections.

Read more: Who is Boko Haram?

Left: The top photo is a satellite image of the village of Doro Baga in northeastern Nigeria taken on Jan. 2. The red areas indicate healthy vegetation. The bottom image was taken on Jan. 7 and shows almost all of the structures razed. Photos by DigitalGlobe