The other Scottish vote — ‘Home of Golf’ to admit women

The Royal and Ancient Golf Club of St. Andrews in Scotland voted to admit women today, by 85 percent of those who took part in the vote. Until now, the 260-year-old club was for men only.

This ballot was a first for its 2,500 global members, both in content and because it’s the first time members were allowed to vote by postal ballot or proxy. The timing coincides exactly with Scotland’s referendum on independence. Scots are deciding whether to dissolve their 307-year-old union with the United Kingdom. 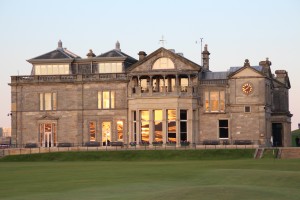 Women are allowed to golf in the Old Course at St. Andrews, but they cannot enter the R&A clubhouse just off the 18th green.

This vote paves the way for women to play a role in the governance of the sport, since the R&A also serves as golf’s rulemaking body everywhere except the United States and Mexico.

Peter Dawson, secretary of the club, said in a statement that the membership has also agreed to fast-track a number of women for membership over the next few months.

Left: The members-only area at the Royal & Ancient Golf Club in St. Andrews, Scotland will now be open to women. Photo by Lorna Baldwin/PBS NewsHour