Why same-sex marriage may soon become a reality in Taiwan

An amendment to include same-sex marriage in Taiwan’s civil code has passed a parliamentary committee, clearing the way for same-sex marriage to become a reality in 2017. Although an attempt to pass the bill fell flat in 2013, Taiwan’s political climate has since changed.

Support for the bill gained momentum after the reported suicide of National Taiwan University Lecturer Jacques Camille Picoux in October, after losing his partner to cancer. Picoux was well-known within the community and lived with his partner Tseng Ching-chao for 35 years, Focus Taiwan reported.

Jay Lin, of Kaohsiung, South Taiwan, who has advocated for LGBTQ rights in the country, told the NewsHour that the fact that Picoux could not make any medical decisions during his partner’s illness triggered new interest in the bill.

“This situation really highlighted the injustice of the law,” he said.

The bill may also have more of a shot now due to support from Taiwan’s President, Tsai Ing-wen, of the Democratic Progressive Party, or DPP. President Ing-wen has generally appeared more sympathetic toward LGBTQ rights than previous administrations.

Chris Wu, a research assistant in rehabilitation medicine in Taipei, Taiwan’s capital, said that certain cities within the country have become more inclusive over time — and that it varies city to city.

“Taipei is the most LGBT-friendly city in Taiwan. However, in other cities or countries, people are more conservative,” Wu, who is gay, said.

In a January interview, Yu Mei-nu, the member of Taiwan’s DPP who introduced the bill to parliament, told PRI: “We’re almost close to passing it.” But she also emphasized the need to achieve the bill’s approval before the country’s 2018 elections.

Since Mei-nu introduced the bill to parliament, 54 of Taiwan’s 113 politicians within the Legislative Yuan, one of the five branches of the Island nation’s government, have backed it.

However, overall opinion concerning the bill remains divided; in Taipei, demonstrations occur in favor and against the new legislation. In a survey by the Taiwanese Public Opinion Foundation of approximately 1,100 respondents, 46.3 percent said they support same-sex marriage legalization, while 45.4 percent expressed opposition. Further resistance has arisen within the Nationalist Party, or Kuomintang, the opposition party to the DPP.

“The ruling party has knowingly disregarded the fact that a silent majority of the public opposes the bill,” Kuo-Tung said during a December legislative session. “This has initiated hatred and instability in society.”

Although Taiwan may become the first Asian country to legalize same-sex marriage, it’s not the first country in the continent to attempt to pass similar legislation. In Thailand, a committee drafted same-sex marriage legislation in 2012, PinkNews, a UK-based newspaper marketed toward the LGBTQ community, reported.

Lin said Taiwan’s same-sex legislation would be “a big step for Asia as a whole” and could “provide inspiration for other countries around Asia” to consider similar laws. 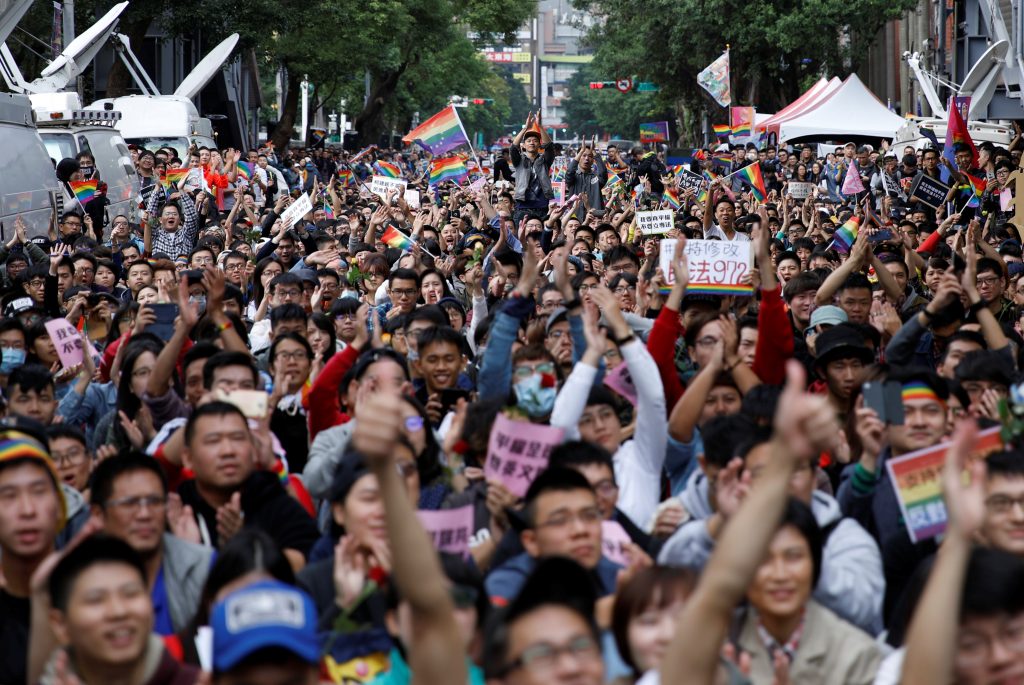 Since Mei-nu introduced the bill to parliament, 54 of Taiwan’s 113 politicians within the Legislative Yuan, one of the five branches of the Island nation’s government, have backed it. Photo by REUTERS/Tyrone Siu

Lawyer and writer M. Bob Kao, who is based out of Taipei, said that if the bill is passed, it will show opponents “that same-sex marriage will not destroy the society and it can exist in an Asian society.”

Parliament is currently in recess, but the bill is expected to be further discussed in April or May when the legislature resumes, Focus Taiwan reported. The bill will be submitted for cross-party negotiations before it can take effect.

Left: A protester shouts slogans during a rally to urge Taiwan's parliament to consider a bill that could legalize same-sex marriage outside the Legislative Yuan in Taipei October 5, 2014. Photo by REUTERS/Pichi Chuang