SEOUL, South Korea — A day after a court removed her from power over a corruption scandal, ousted South Korean President Park Geun-hye maintained her silence on Saturday as her opponents and supporters divided the capital’s streets with massive rallies that showed a nation deeply split over its future.

Park has been unseen and unheard from since the Constitutional Court’s ruling on Friday, which ended a power struggle that had consumed the nation for months. Park, whose fate was left in the court’s hands after her parliamentary impeachment in December, has yet to vacate the presidential Blue House, with her aides saying they need more time to prepare for her return to her private home in Seoul.

Carrying flags and candles and cheering jubilantly, tens of thousands of people occupied a boulevard in downtown Seoul to celebrate Park’s ouster. Meanwhile, in a nearby grass square, a large crowd of Park’s supporters glumly waved national flags near a stage where organizers, wearing red caps and military uniforms, vowed to resist what they called a “political assassination.”

Police had braced for violence between the two crowds after three people died and dozens were injured in clashes between police and Park’s supporters after the ruling on Friday. Nearly 20,000 police officers were deployed on Saturday to monitor the protesters, who were also separated by tight perimeters created by hundreds of police buses.

The anti-Park protesters shouted “The candles have won!” and “Arrest Park Geun-hye!” as they began marching toward the Blue House. The protesters, who held candles during their massive evening demonstrations in recent months, loosely call themselves the Candle Force.

The court’s decision capped a stunning fall for the country’s first female leader. Park rode a wave of lingering conservative nostalgia for her late dictator father to victory in 2012, only to see her presidency crumble as millions of furious protesters filled the nation’s streets. 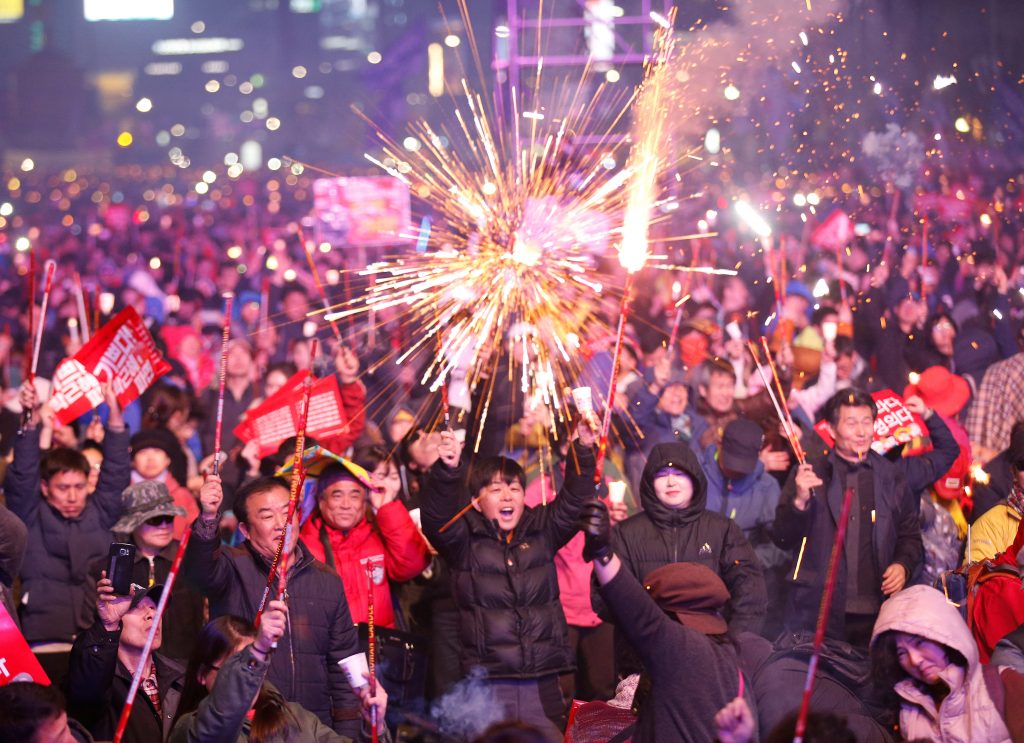 While the ruling might have irrevocably derailed Park’s political career, analysts saw defiance in her silence, saying that Park was perhaps hoping to use the growing anger of her followers to rebuild support.

“By being quiet, she’s making it loud and clear that she won’t accept the court’s ruling,” said Yul Shin, a professor at Seoul’s Myongji University. “Nobody knows when she will leave the Blue House, but maybe she wanted to see how large the crowd was tonight at the pro-Park rally.”

The ruling allows possible criminal proceedings against the 65-year-old Park — prosecutors have already named her a criminal suspect — and makes her South Korea’s first democratically elected leader to be removed from office since democracy replaced dictatorship in the late 1980s.

It also deepens South Korea’s political and security uncertainty as it faces existential threats from North Korea, reported economic retaliation from a China furious about Seoul’s cooperation with the U.S. on an anti-missile system, and questions in Seoul about the Trump administration’s commitment to the U.S.-South Korea security alliance.

South Korea must hold an election within two months to choose Park’s successor. Liberal Moon Jae-in, who lost to Park in the 2012 election, currently enjoys a comfortable lead in opinion polls.

Kim Yong-deok, the chief of the National Election Commission, said Saturday that the election would be managed “accurately and perfectly” and urged the public to participate in a vote that would “determine the fate of the Republic of Korea,” referring to South Korea’s formal name.

The Constitutional Court accused Park of colluding with longtime confidante Choi Soon-sil to extort tens of millions of dollars from businesses and letting Choi, a private citizen, meddle in state affairs and receive and look at documents with state secrets. Those allegations were previously made by prosecutors, but Park has refused to undergo any questioning, citing a law that gives a sitting leader immunity from prosecution.

It is not clear when prosecutors will try to interview her.

Prosecutors have arrested and indicted a slew of high-profile figures over the scandal, including Choi and Samsung’s de facto chief, Lee Jae-yong.

Park’s lawyer, Seo Seok-gu, who had previously compared her impeachment to the crucifixion of Jesus Christ, called the verdict a “tragic decision” made under popular pressure and questioned the fairness of what he called a “kangaroo court.”

Some of Park’s supporters reacted with anger after the ruling, shouting and hitting police officers and reporters with plastic flag poles and steel ladders and climbing on police buses. Police and hospital officials said three people died while protesting Park’s removal, including a man in his 70s who died early Saturday after collapsing near the court.