Southern Mexico shaken by deadly 8.1 earthquake, its strongest in a century

A deadly earthquake struck off the southwestern coast of Mexico before midnight Thursday, killing at least 58 people, including several children.

It was the strongest earthquake the country has felt in a century, President Enrique Pena Nieto said.

What happened? The U.S. Geological Survey said a magnitude 8.1 quake hit just off the state of Chiapas, about 50 miles from its Pacific coast. But Mexican seismologists rated the earthquake with a magnitude of 8.2.

The shaking ground toppled houses and buildings in Chipas, killing three in San Cristobal de las Casas, according to the Associated Press. At least 45 people died in Oaxaca state, the Associated Press said. The two children died in Tabasco state, north of Chiapas, one due to a collapsing wall, the other because of a power outage at a hospital, Governor Arturo Nunez said. 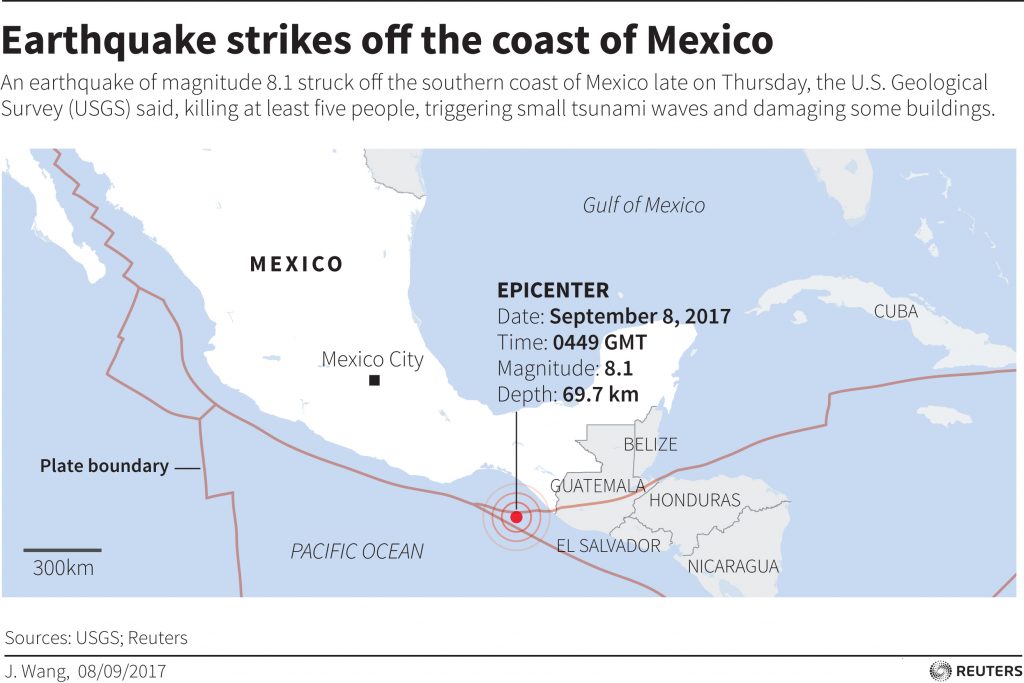 Map locating earthquake off the coast of Mexico. Chart by Reuters

The immense tremors also caused severe destruction in Oaxaca, where the facade of one hotel split in half.

A number of buildings in Juchitan, Oaxaca were demolished by the earthquake, according to local reports, including the ones in this video.

Posted by Cortamortaja on Thursday, September 7, 2017

The powerful earthquake also shook buildings 460 miles from its epicenter, with tremors felt as car away as the capital Mexico City. There are reports of damage in nearby Guatemala too.

Ripple effect With its close proximity to the coast and 21-mile depth, the earthquake sparked a series of relatively small tsunamis that hit the Chiapas coast line. The biggest was approximately 3 feet tall, but the National Tsunami Warning Center said larger tsunamis — up to 10 feet — are still possible along the Mexican coast.

The tsunami threat is minimal — less than a foot — for Hawaii, and the earthquake may create 3-foot swells for American Samoa.

Officials in Chiapas told the AP they were starting precautionary evacuations because of the risk.

What happens next? The cleanup begins for Chiapas and Oaxaca, which were hit hardest by the quake. The death toll seems likely to rise as emergency officials work through the rubble in these remote areas. Energy companies will look to restore power to the 1 million people who lost electricity.

Meanwhile, Hurricane Katia is barreling toward the same region from the east.