‘Stateless’ with ‘no possibility of escaping war’: One Syrian refugee’s story

Mohammed Badran’s first speech ever was in front of the United Nations General Assembly, where he demanded world leaders stop conflicts that force people from their homes.

“‘We are living on the edge of hell. We have been waiting for so long for the day that the world would hear our voice. I hope it is today.'”

For three minutes, the 22-year-old Syrian refugee spoke for millions of people who, like him, are “stateless and stuck with no possibility of escaping the war,” he said in September.

“‘We are living on the edge of hell. We have been waiting for so long for the day that the world would hear our voice. I hope it is today,’” Badran said, quoting another Palestinian Syrian refugee named Zoher who asked that his last name be withheld.

Badran is one of 65 million refugees, asylum seekers and internally displaced people worldwide, driven from their home countries by violence and persecution, according to the United Nations High Commissioner for Refugees. That’s more than the population of the United Kingdom, and the highest number since World War II.

And more than half of the world’s refugees have fled from three nations — the Syrian Arab Republic, Afghanistan and Somalia — according to the United Nations.

When the United Nations General Assembly met on Sept. 19, 193 countries agreed to protect refugees and migrants. The resulting declaration lays the foundation for world leaders to adopt a global refugee compact for “safe, orderly and regular migration” in 2018, said Christopher Boian, press officer for the U.N. refugee agency.

“It sends a very clear signal that business as usual is no longer an adequate response,” Boian said. “The world is now facing a refugee crisis of scope and nature that hasn’t been seen before. This is unprecedented.”

“With you or without you, we are already doing something.”

But Bill Frelick, refugee program director at Human Rights Watch, is less enthusiastic about the New York Declaration for Refugees and Migrants. There’s no legal recourse if a nation backs out, and Frelick said what was missing from the string of speeches delivered by world leaders was a “sense of urgency.”

“The international community has basically veered between vapid pronouncements of solidarity,” he said, adding that scratching the surface of the rhetoric reveals a containment agenda designed to keep refugees and migrants as close to their home countries as possible.

“Putting an emphasis on orderly migration is not putting the rights of refugees and very vulnerable human beings at the forefront,” he said.

In two years, Badran doesn’t know what will remain of his war-torn home country. But he wants no one to mistake him for a victim “begging people to do something,” he said: “With you or without you, we are already doing something.”

Helping people always made sense to Badran, even if it marked him as an oddball in Damascus.

When Badran was 12 years old, he volunteered to sort and shelve books. He later collected unwanted paper from his teachers, classmates and neighbors to recycle, filling huge bags he carried Santa Claus-style over his shoulder. He said his bewildered family would ask him: “It’s an unpaid job. Why are you wasting your time?” He never had a good answer, he said.

And then the Syrian civil war broke out. In December 2012, a Syrian warplane bombed Yarmouk, the Palestinian community in Damascus where his parents worked. They fled to a farm two hours away, leaving Badran behind to focus on his college classes in interior design. He still volunteered, but people began to threaten him for his humanitarian relief efforts with Syria Trust and the United Nations.

“I did really do my best to help people inside, but I couldn’t do anything more,” he told the NewsHour. “I really want to leave a mark, and I didn’t want to just to die in a bomb or shooting guns or something. That was the main reason why I left. I felt like maybe I could do something more from outside.”

It took him five months to reach the Netherlands, and if you ask him what happened after he fled his homeland, he won’t go into specifics. A man seized his passport and smuggled him back and forth between Egypt and West Africa, including Ghana. Finally, Badran said he escaped, using a fake passport to board a commercial airplane in November 2013 that took him from Africa to Amsterdam Airport Schiphol.

The morning he landed in the Netherlands, Badran said he nervously told Dutch police officers he was a refugee who needed asylum. By that evening, he was moved into a crowded camp without a job, home, friends or family.

Syrians at the time already made up the largest portion of new asylum seekers in the Netherlands at 9 percent — trying to enter industrialized countries, including the United States, according to a recent report from the Organization for Economic Cooperation and Development.

Picking Up the Pieces

In Amsterdam, Badran spent years rebuilding his life. For 10 hours a day, he sold pre-made sandwiches at Simit Sarayi, a chain of Turkish cafes, working his way up to manager after two months and then hiring three more Syrians. He learned enough Dutch to qualify for remedial college courses in early 2015 and earned enough money to rent an apartment. His parents eventually reunited with him. In September, he enrolled at Free University in Amsterdam.

Interior design classes no longer interested him. Bomb blasts had cratered Damascus, and civil war had driven him more than 2,600 miles from his hometown. For Badran, studying cultural anthropology and development became a more relevant choice.

So he began to volunteer again. He and fellow refugees created a nonprofit group, Syrian Volunteers in the Netherlands. Since registering in February, organizers paired Syrian refugees and native Dutch citizens who together completed household chores for elderly residents, cared for children with disabilities and tended public gardens.

More than 600 people have joined the organization, including refugees who want to “help out somehow” in their host country, even if they couldn’t do the same at home, Badran said. As tensions mount in Europe against refugees, Badran designed dialogue sessions where his nonprofit’s volunteers confront Syrian and Dutch stereotypes. He plans to expand his model to Germany and Sweden.

In November 2015, he met Attila Kulcsar, a humanitarian media officer at Oxfam International, at a documentary film festival in Amsterdam. Kulcsar later suggested Badran apply to speak before the United Nations General Assembly and mentored him.

Out of more than 400 applicants, Badran was selected in August. He had a month to prepare and three minutes to make the case for refugees to world leaders.

“I’m a bit worried about the message and delivering it. If you can help, that would be great,” he wrote Kulcsar in an Aug. 20 email in his typical reserved style.

“It seems inaction is the only thing that the international community can agree on.”

For weeks, they drafted his speech and made countless revisions. Badran practiced, but his delivery was stiff and he stumbled over his words during rehearsal the day before the summit at the United Nations in New York City. In a nearby park, he and Kulcsar launched into an hours-long drama session to “help him reveal his power, reveal his emotion,” Kulcsar said.

The next morning, Badran walked confidently to the podium, but for a moment, he was overwhelmed. Hundreds of the most powerful people in the world looked back at him.

And then he spoke. His searing words demanded accountability and agreement “to end the violence now in Syria and protect civilians; to guarantee safe route for all refugees and to not put our lives on hold; to empower refugees to lead projects for refugees so that we can help our people.”

“It seems inaction is the only thing that the international community can agree on,” he said. “If world leaders today are unable to find a solution for the refugee crisis and the Syrian crisis, then this summit is no different from all other conferences.” 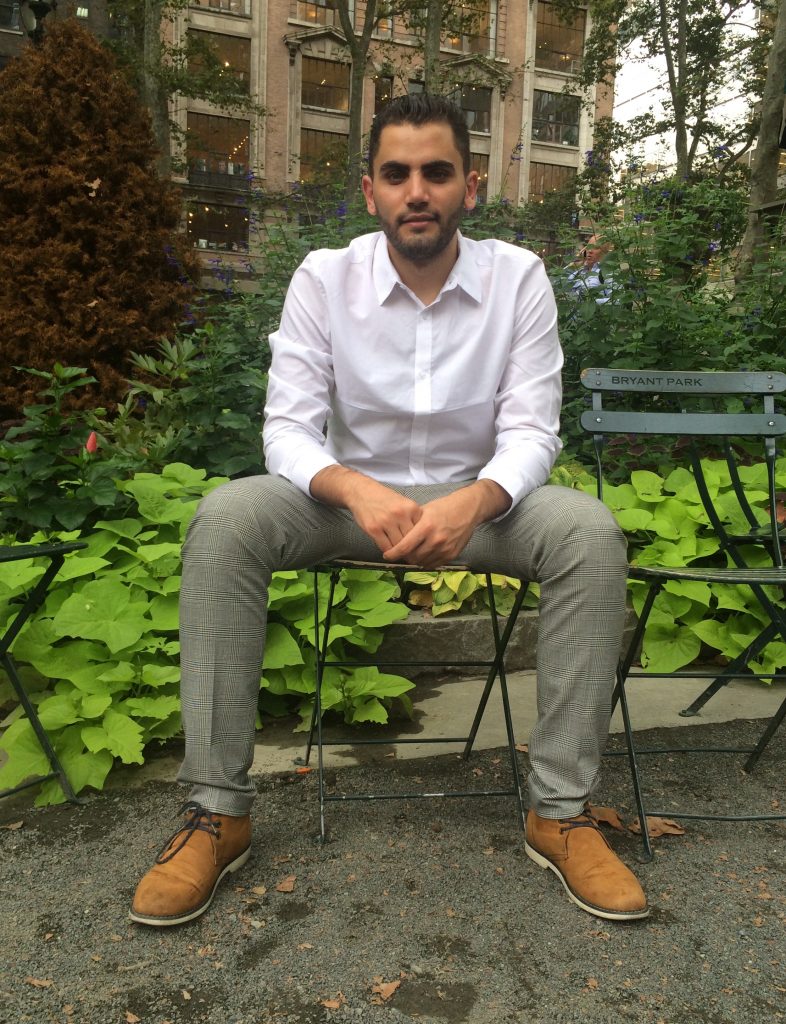 Mohammed Badran sits in Bryant Park in New York City near the United Nations headquarters where he addressed world leaders about the need to help refugees. Photo by Laura Santhanam/NewsHour

Two months have passed since Badran gave his speech at the United Nations. College classes and volunteer work consume his time.

Syria remains besieged by war. The latest cease-fire talks fell apart. The World Health Organization recently reported 25,000 people are wounded each month, more than half of all public hospitals and primary care centers function in part or not at all. About two-thirds of all doctors and nurses are gone. This week, CNN aired video of hospitalized children choking to breathe after suspected gas attacks struck Aleppo.

Badran said such unmet needs fuel his desire to “empower refugees to come up with solutions and new ideas to support themselves.”

World leaders gave themselves two years to figure out how to help millions of refugees flee chaos. But Badran can’t wait that long.