CURITIBA, Brazil — Former Brazilian President Luiz Inacio Lula da Silva woke up in jail Sunday, in a stunning fall from grace for a man who rose from nothing to lead Latin America’s largest nation and later became engulfed in corruption allegations.

Foreshadowing possible clashes in the weeks to come, police shot rubber bullets and sprayed tear gas late Saturday at supporters waiting for da Silva as he landed in a police helicopter in the southern city of Curitiba, where he will serve his 12-year sentence for money laundering and corruption.

Just a few hours before that, da Silva had to have guards push their way out of a metal workers union in a Sao Paulo suburb so he could turn himself in to police; supporters were trying to keep him from going into custody.

Speaking to thousands of supporters at the union that was the spiritual birthplace of da Silva’s rise to prominence, the former leader said would turn himself in so as to continue fighting a corruption conviction that he said amounted to a way for enemies to make sure he doesn’t run — and possibly win — re-election in October.

When he first tried to leave the metal workers union headquarters, however, dozens of supporters blocked a gate where a car carrying da Silva was trying to exit.

“Surround, surround (the building) and don’t let them arrest him,” chanted supporters. After a few minutes of tense words between guards and supporters, the former president got out of the car and entered the headquarters. 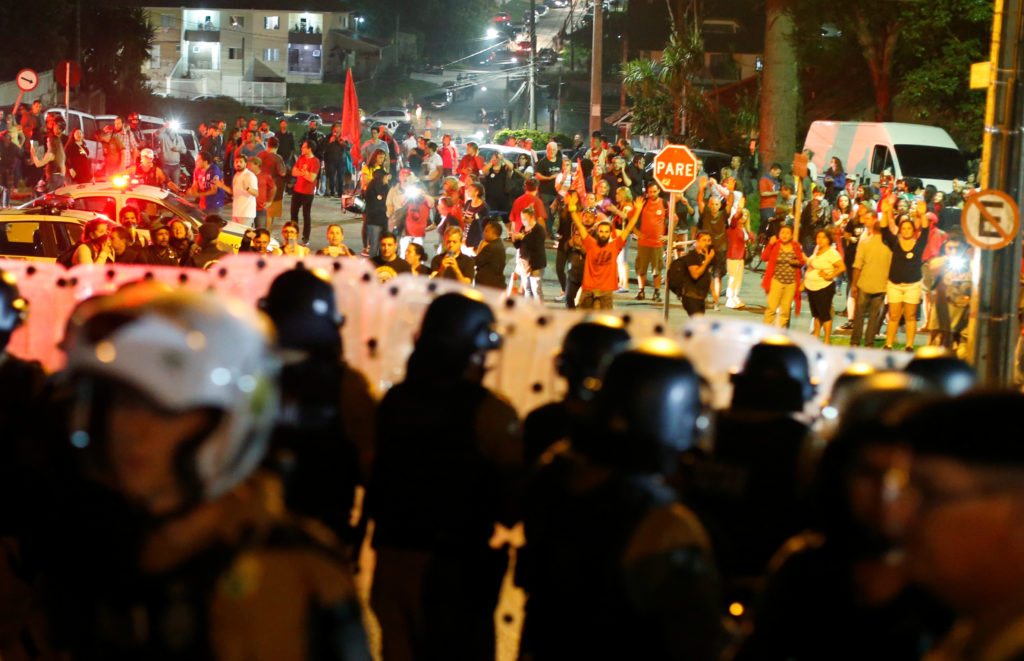 Police vehicles surrounded the union, raising the fears of clashes. Da Silva emerged a second time shortly after nightfall, this time surrounded by bodyguards who pushed back scores of supporters who tried to stop his advance.

Such dramatic scenes throughout the day underscored the drama that has rapt a nation deeply divided on da Silva’s legacy and whether he is guilty of corruption. The latest developments began when the Supreme Federal Tribunal, the country’s top court, ruled against his petition on Thursday to remain free while he continued to appeal his conviction.

Judge Sergio Moro, who oversees many of the so-called “Car Wash” cases, then ordered an arrest warrant for da Silva, giving him until 5 p.m. Friday to present himself to police in Curitiba, about 260 miles (417 kilometers) southwest of Sao Bernardo do Campo, and begin serving his 12-year sentence.

Da Silva, who Brazilians simply call “Lula,” did no such thing. Instead, he hunkered down with supporters in the union headquarters.

“I don’t forgive them for giving society the idea that I am a thief,” he continued.

Still, da Silva said he would turn himself in “to go there and face them eye to eye. The more days they leave me (in jail), the more Lulas will be born in this country.”

While da Silva spoke, some people cried while others chanted “Free Lula!” When he finished speaking, a sea of supporters carried him on their shoulders back into the building.

Mauricio Santoro, a political science professor at the State University of Rio de Janeiro, said that by not complying with the order on Friday da Silva “wanted to demonstrate strength and popularity, showing that he is a political leader capable of gathering a crowd in his support.”

Choosing the metal workers union to take refuge, and not the Workers’ Party headquarters, was also significant, said Santoro.

“It shows that he wants to emphasize his trajectory as leader of a social movement, rather than his role as leader of a party marked by allegations of corruption,” he said.

Last year, Moro convicted da Silva of trading favors with a construction company in exchange for the promise of a beachfront apartment. That conviction was upheld by an appeals court in January. The former president has always denied wrongdoing in that case and in several other corruption cases that have yet to be tried.

Still, his jailing marks a colossal fall from grace for a man who rose from poverty to power against steep odds in one of the world’s most unequal countries. During his two administrations, several social welfare programs and a booming economy helped tens of millions come out of abject poverty, making his downfall deeply personal for many Brazilians who saw him as a symbol of hope.

Born in the hardscrabble northeast, da Silva rose through the ranks of the union in the country’s industrial south. In 1980, during the military dictatorship, he was arrested in Sao Bernardo do Campo for organizing strikes. He would spend more than a month in jail.

After running for president several times, in 2002 da Silva finally won. He governed from 2003 to 2010, leaving office an international celebrity and with approval ratings in the high 80s.

Like so much in a nation that has become deeply polarized, that da Silva would soon be behind bars was being interpreted differently by supporters and detractors.

“We have no choice but to keep our head high. Our struggle will be bigger tomorrow,” said Fernando Lauro, a supporter who watched da Silva be taken by police.

“I hope he never gets out, but I fear he will,” said Silvia Gend, a 72-year-old housewife in Sao Bernardo do Campo. “Brazil is the country of impunity.”

Workers’ Party leaders insist that da Silva, 72, will still be the party’s candidate in October. Technically, being jailed does not keep him off the ballot.

In August, however, the country’s top electoral court makes final decisions about candidacies. It is expected to deny da Silva’s candidacy under Brazil’s “clean slate” law, which disqualifies people who have had criminal convictions upheld. Da Silva could appeal, though doing so from jail would be more complicated.

The former leader is the latest of many high-profile people to be ensnared in possibly the largest corruption scandal in Latin American history. Over the last four years, Brazilians have seen near weekly police operations and arrests of the elite.

Investigators uncovered a major scheme in which construction companies essentially formed a cartel that doled out inflated contracts from state oil company Petrobras, paying billions in kickbacks to politicians and businessmen.