Who owns the Jewish treasures that were hidden in Saddam Hussein’s basement?

In 2013, Maurice Shohet, an Iraqi Jew who now lives in Washington, D.C., received a surprising email from the National Archives. A librarian had recovered his elementary school record that was left behind nearly 40 years ago when he and his family fled Iraq. The record is part of a cache of thousands of personal documents and religious texts that were found at the start of the Iraq War, drowning in the cellar of a building run by one of the world’s most wanted men. 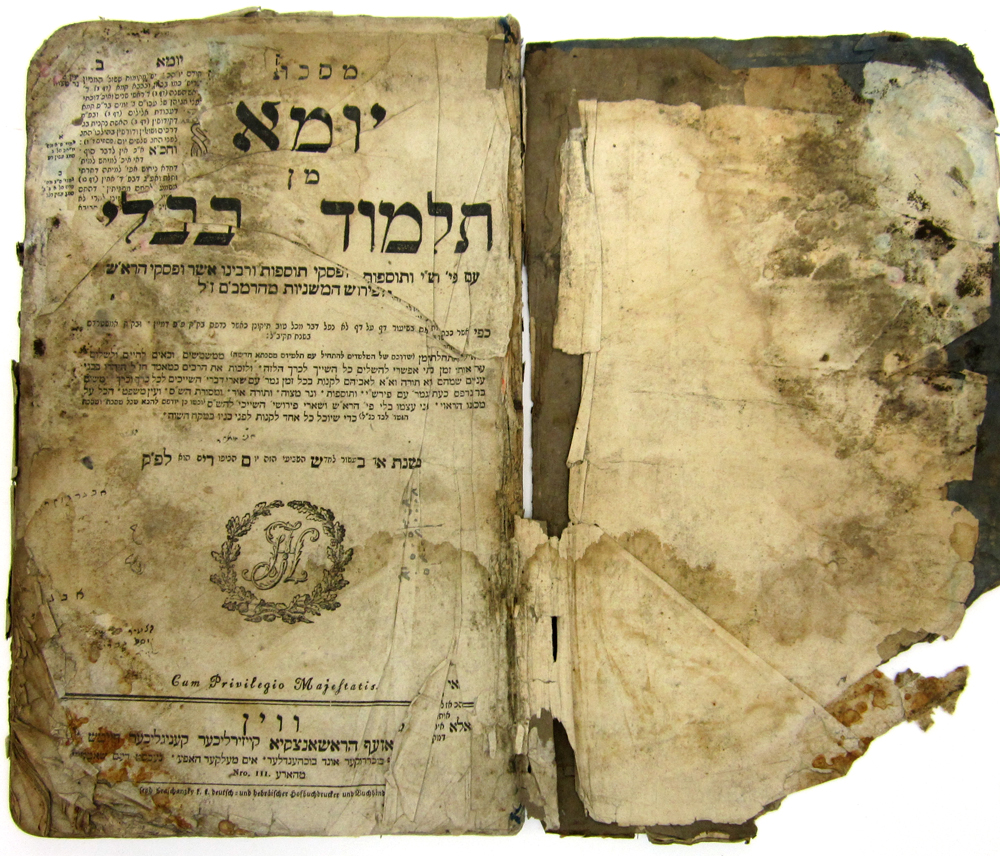 This 1793 Babylonian Talmud was one of several sacred Jewish texts that was recovered from the basement of Saddam Hussein’s intelligence headquarters in 2003. The items were rescued and brought to the U.S. to be restored. Photo by U.S. National Archives

The Jews of Iraq are one of the oldest civilizations in the world. For more than 2,500 years, they called the land in the heart of the Fertile Crescent their home. It’s where they celebrated births and where they mourned deaths. It’s where they worked, studied and prayed. It’s where some of their most important holy writings originated.

By the time the Iraq War began in 2003, their numbers had dwindled to less than 50 people. Most had fled to escape anti-Semitic violence and persecution. They were forced to leave behind centuries worth of sacred and secular texts and artifacts. But a month into the start of the Iraq War, thousands of those materials, stewing in a massive clutter under four feet of water, were found in an unexpected place — the basement of Saddam Hussein’s secret police headquarters.

It was May 6, 2003, and a former member of Hussein’s secret police had received an extraordinary tip. Something quite surprising was concealed in the Baghdad headquarters of Hussein’s intelligence service, or Mukhabarat, he informed Iraqi opposition leader Ahmed Chalabi. 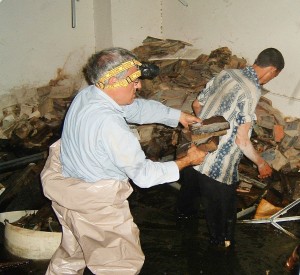 Dr. Harold Rhode was up to his knees in water while he examined the materials that were left to soak underground. Photo by Adam Daifallah

Chalabi passed the tip on to Dr. Harold Rhode, a Pentagon advisor on Islamic Affairs, and New York Times reporter Judith Miller, who was embedded in an elite U.S. Military Unit assigned to looking for weapons of mass destruction. When they arrived at the Mukhabarat, the tipster, who was head of the secret police’s “Jewish unit,” pointed to a side of the building and then fled. The Army unit went in first, because getting there was no easy feat. Not long before, a 2,000-pound unexploded bomb had slammed through the building destroying the water system and flooding the basement.

“They were more than up to their stomachs in the water,” said Rhode.

But there, just as the tipster had said, they found tens of thousands of holy and secular Jewish books, documents and objects, submerged.

Rhode, an observant Jew, knew there was something special about the find. “Oh my God,” he thought. “What do we do to save this?” 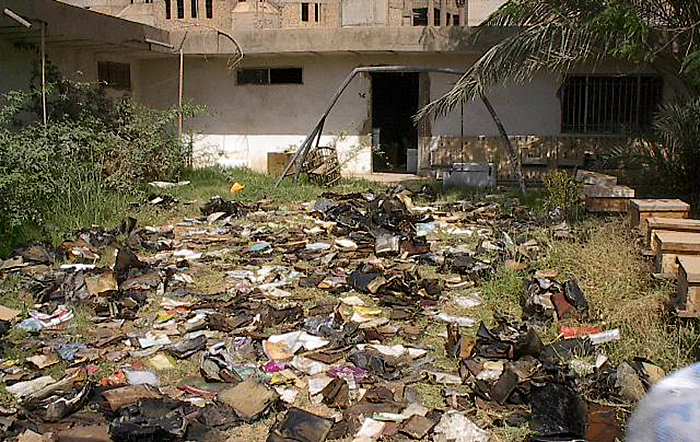 Several of the books were laid out in the courtyard in an effort to dry them. Photo courtesy of Harold Rhode

Rhode said he was warned by Iraqi political leaders at the time to get the items out of Iraq before news of the findings became public. And, he said, the Americans were not interested in the find in the beginning. “They saw it as nothing more than a nuisance,” he said.

Rhode was determined to save the waterlogged archives.

“If I had decided not to do anything it would have been the end,” he said. “It would have disintegrated under water.”

What would have been lost was more than 2,700 sacred and secular manuscripts and books; tens of thousands of communal records; and relics dating from the 1540s through the 1970s. The items were written in Hebrew, Judeo-Arabic, Arabic and English. This cache of material is now known as the “Iraqi Jewish Archives,” and its ownership has become a source of dispute between Iraqi Jewish exiles and the Iraqi and United States governments. 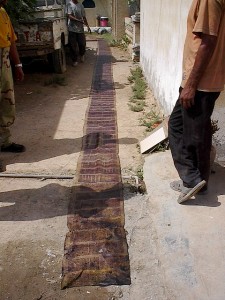 Rhode unrolled a wet Torah and laid it on the ground to dry. Photo by U.S. National Archives

One of the items that had caught Rhode’s eye that day was a Torah scroll, the most holy object in Judaism. It contains the first five books of the Bible written on parchment and is treated with reverence; it is usually forbidden from touching the ground. But on this day — that Rhode remembers as approaching 110 degrees — he decided to make an exception. Jewish law also says that saving a Torah is almost like saving a soul. So Rhode opened up the scroll and laid it on the ground to give it a chance to dry.

The Torah was saved.

But how it got there in the first place remains a mystery.

Maurice Shohet, who fled Iraq in 1970 with his family, said that the secret police seized the material from the Jewish community to break its spirit. Shohet, who is now the president of the World Organization of Jews from Iraq, said that by the time of the confiscations, the Iraqi Jewish community had been decimated. Some were victims of executions and kidnappings; a number of them had just disappeared.

“Every part of our history, our culture, our self-identity is there, and they should be returned to us.”
Violence can be traced back to June 1941. In what became known as the Farhud Pogrom, 180 Jews were slaughtered in just two days. The creation of the state of Israel in 1948 brought on even more anti-Jewish sentiment. The majority fled the country in droves between 1949 and 1952. They were forced to leave behind many of their assets.

The 1967 Arab-Israeli War made conditions even more precarious for the 2,500-3,000 Jews who were left in Iraq. In 1969, nine Jews were executed in Baghdad based on fabricated charges of spying. Shohet, now 64, was not allowed to attend university because he was Jewish. He recalled that members of the intelligence were on constant watch from street corners. “We were (living) out of fear all the time.” 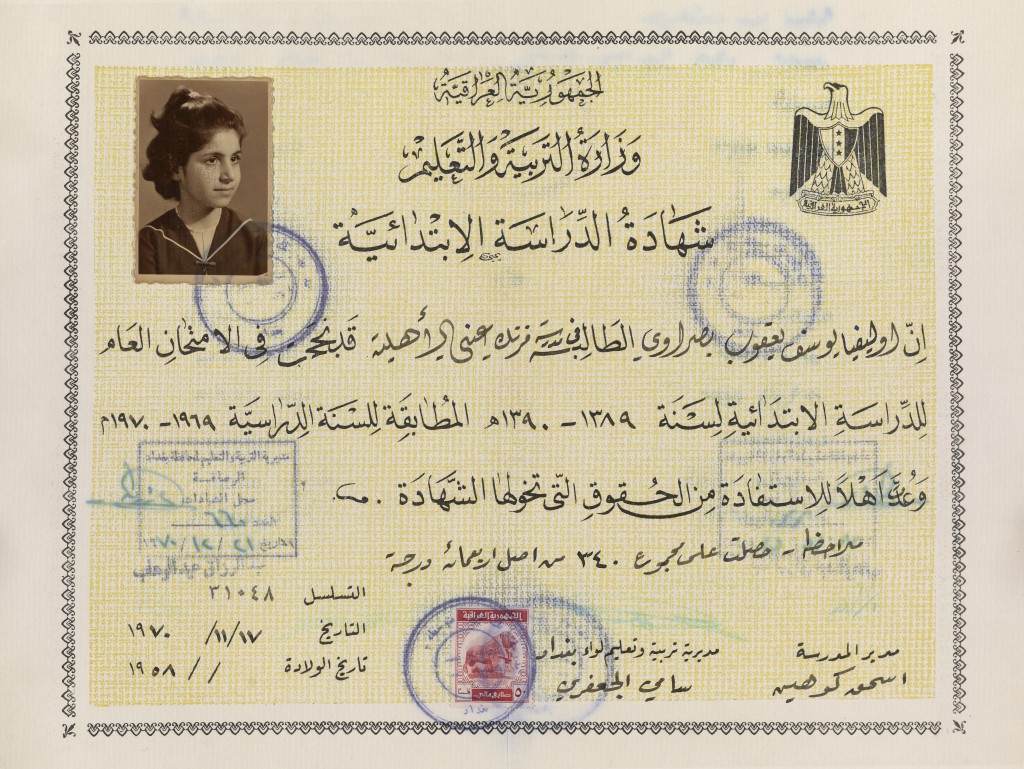 So when the police came for the materials, the remaining Jewish community didn’t protest. Members of the intelligence took the material with no explanation. “It was just an act of anti-Jewish sentiment,” Shohet said.

Rhode added that culturally in the Middle East, humiliation must be avoided at all costs. He thinks that Hussein believed he was shaming the Jews by hiding their material in the lowly basement where they couldn’t get to it.

Rhode made it his mission to get them out of there.

In August 2003, The National Archives was granted temporary custody of the Iraqi Jewish Archive. This was based on an agreement they signed with the Coalition Provisional Authority, the temporary government set up in Iraq in the aftermath of Hussein’s downfall. The CPA later transferred its authority over the agreement to the Iraqi Ministry of Culture, who, with the consensus of the Iraqi State Board of Antiquities, permitted the documents to be shipped to the U.S. for preservation work on the condition that they be returned to Iraq upon completion of the restoration. The return date was set for June 2014. It is this agreement that is the cause of friction between the Iraqi Jewish expatriates and the U.S. and Iraqi administrations.

Learn how the National Archives was able to transport thousands of soaked and moldy material from Baghdad to the U.S. and how they were able to clean and restore some of the most damaged items. Video by U.S. National Archives

Jewish exiles say that the artifacts belong to them and that they were only given to the Hussein regime under duress. It was dangerous to be a Jew in Iraq, said Rhode. “Their lives were made miserable by the Iraqi government.”

Shohet said that his group has been in talks with the Iraqi embassy in Washington about the possibility of renegotiating the terms of the agreement. In November, Iraq’s ambassador to the U.S., Lukman Faily, told the Jewish Daily Forward that his government was willing to discuss the possibility of an extended loan of the collection. “We don’t see that as a problem, but as of now, the agreement is for these artifacts to go back home.” But later that month, Ali al-Moussawi, a spokesman for Iraq’s Prime Minister, Nouri al-Maliki, told Reuters that the U.S. agreed to hand over the items to Iraq “… and currently there is no problem, despite attempts by the Jewish community in America to obstruct this matter.” He said that the Iraqi government would not relinquish any of the material. “This is Iraqi legacy owned by all of the Iraqi people and belongs to all generations.”

Saad Eskander, the director of the Iraqi National Library, told the Associated Press in October that the artifacts would be used to educate future generations in his country about the contributions the Iraqi Jews made and the repression they suffered in Iraq. 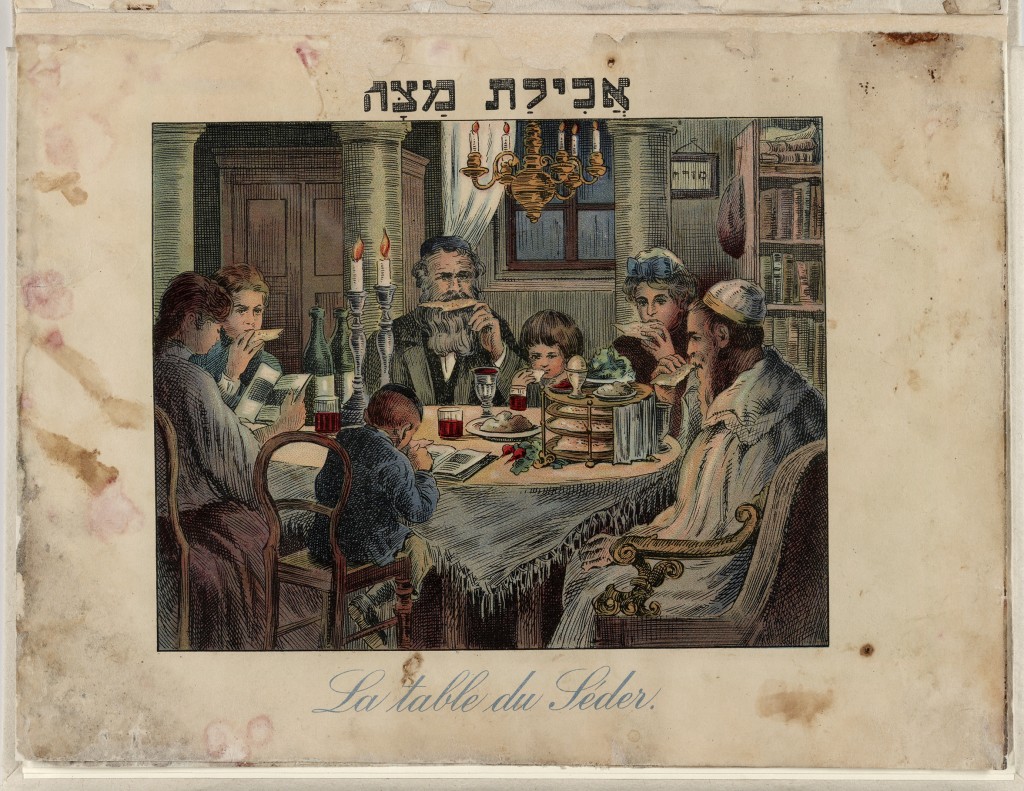 This 1930 French and Hebrew Passover Haggadah was severely damaged when it was brought to the National Archives. This is the restored version. The caption above the image reads: “eating matzah.” Photo by U.S. National Archives

Michael Lavallee, a State Department spokesperson, on Monday told the NewsHour in an email: “While we remain committed to the terms of the 2003 agreement, we are also aware of the sensitivities surrounding the return of the material and are in discussions with our Iraqi counterparts and other interested parties to find a mutually agreeable approach to ensure continued access and sharing of these documents, including the possibility of additional [Iraqi Jewish Archive] exhibits in the United States. We will continue to engage involved parties to explore possibilities on this issue.”

Meanwhile, members of congress have protested the collection’s planned return to Iraq. On Feb. 6, the Senate unanimously passed a resolution noting the original agreement was signed before understanding the complete history of the material. It urged the State Department to renegotiate the terms. A similar resolution is now being considered in the House. A bipartisan letter to Secretary of State John Kerry from Reps. Steve Israel (D-N.Y.) and Ileana Ros Lehtinen (R-Fla.) that was cosigned by 47 fellow members and delivered in November stated: “It would be criminal for the U.S. government to be complicit in denying the Jewish community what is rightfully theirs.” 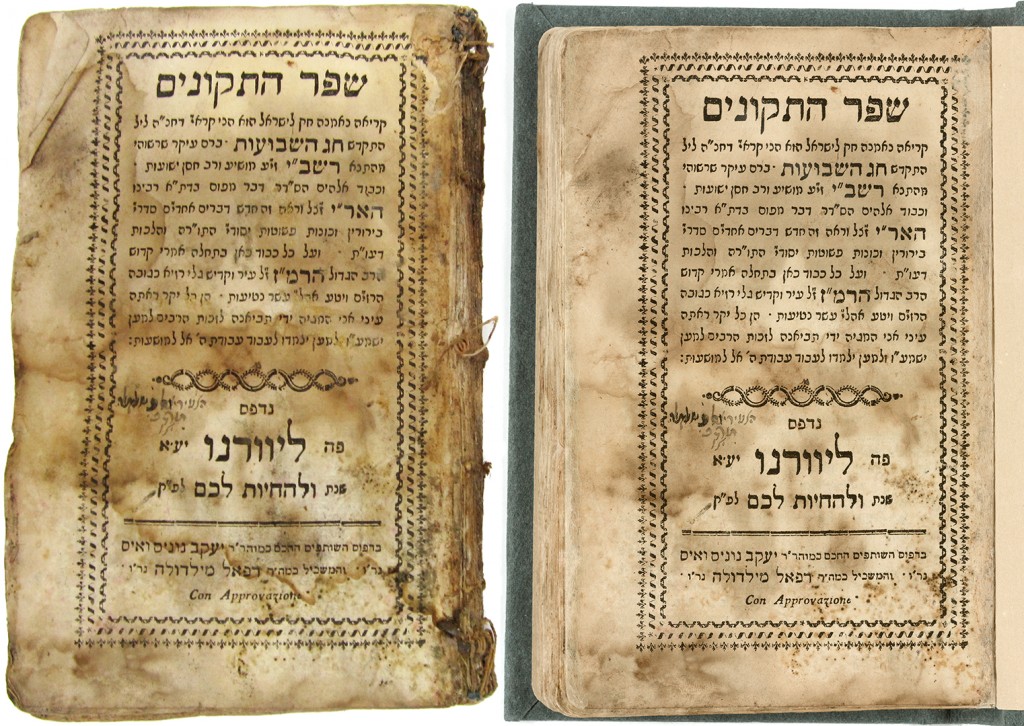 Before and after: This 1795 Book of Vigils would have been studied on the eve of the Jewish holiday of Shavuot. Photo by U.S. National Archives

The National Archives has created a publically accessible and searchable website of the digital versions of the artifacts — many of the items are available on it now. The rest is slated to be uploaded by June 1.

Rhode praised the work the Archives did in digitizing the material but says, “When you actually see it and touch it there’s a wow feeling that goes on deep inside.” 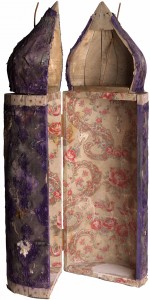 Shohet, who lives in Washington, D.C., said that the materials mean a lot to the Jewish exile community. In 2010 he was part of a committee who went over the material and was surprised to see his father’s and grandfather’s names on some of the items. He also learned from Dina Herbert, the Iraqi Jewish Archive project librarian, that his own name was found on school records. He received the information on his birthday last year.

“The collection is really a symbol of the richness of the Iraqi Jewish culture,” Shohet said. “You need to feel them and not just relate to them through websites.”

Shohet says the archives show the accomplishments of the Jewish community in Iraq, a community who can trace their history back to the Babylonian exile 2,500 years ago.

“All we have left is this treasure of our history that we couldn’t take with us,” he said. “Every part of our history, our culture, our self-identity is there, and they should be returned to us.”