DAVAO, Philippines — A strong earthquake jolted the southern Philippines on Sunday, killing at least one person and causing a three-story building to collapse, setting off a search for people feared to have been trapped inside, officials said.

The magnitude 6.9 quake struck an area about 6 kilometers (3.7 miles) northwest of Padada town in Davao del Sur province at a depth of 30 kilometers (18 miles), according to the Philippine Institute of Volcanology and Seismology. The area has been battered by a series of powerful quakes in recent months.

A child was killed in a village in Davao del Sur’s Matanao town when a wall of her house tumbled down as the ground shook and hit her in the head, officials said.

Davao del Sur Gov. Douglas Cagas said a three-story building housing a grocery store collapsed in downtown Padada during the quake, trapping an unspecified number of people inside. Search and rescue efforts were underway, he told the DZMM radio network, adding that an unknown number of people were injured in his province.

“The shaking was different this time, it wasn’t swaying. It’s like a roller was rumbling by underneath,” Fernandez told DZMM from an emergency shelter. As he was being interviewed, he paused briefly, saying the ground was shaking again in the latest of dozens of aftershocks. 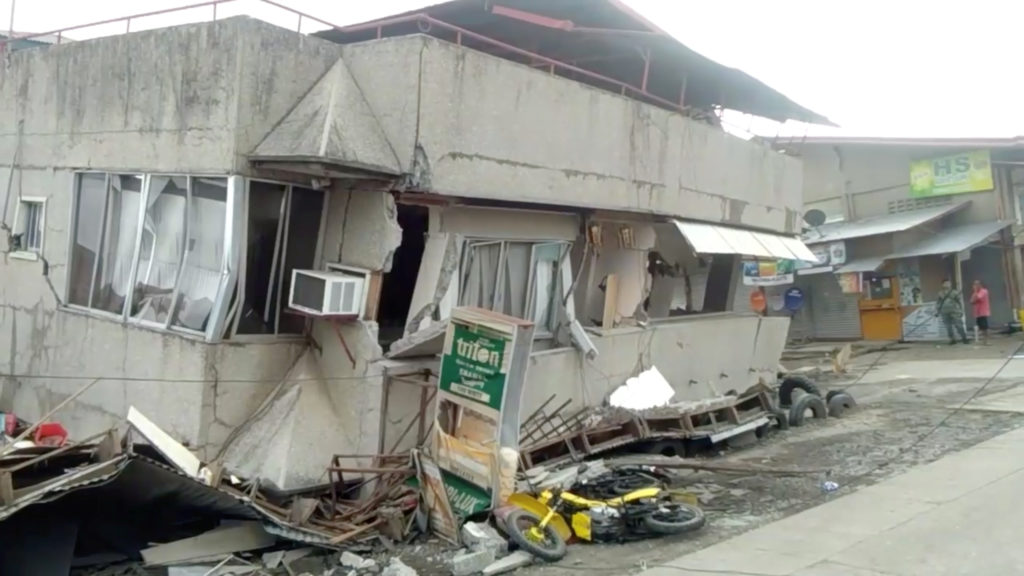 Damaged buildings are seen at Padada market, in Padada, Philippines December 15, 2019 in this still image obtained from social media video. Photo via Reuters.

Fernandez appealed for food packs and tents to be used by residents who needed immediate shelter from the rainy weather. Many buildings that can be used as evacuation centers have been damaged by recent earthquakes, he said.

President Rodrigo Duterte was safe with his daughter in his house in Davao city, where the earthquake was felt strongly. He returned to sleep after the tremors, said Brig. Gen. Jose Niembra, who heads the presidential security force.

Classes in Davao del Sur province will be suspended Monday to allow checks on the stability of school buildings. Some cities and town lost their power due to the quake, officials said.

The Davao region has been hit by several earthquakes in recent months, causing some deaths and scores of injuries and badly damaging houses, hotels, malls and hospitals.

The Philippine archipelago lies on the so-called Pacific “Ring of fire,” an arc of faults around the Pacific Ocean where most of the world’s earthquakes occur. It’s also lashed by about 20 typhoons and other severe storms each year, making the Southeast Asian nation of more than 100 million people one of the world’s most disaster-prone countries.