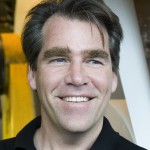 Syrian youth come of age through five years of war

Border of Despair: Lebanon from GroundTruth on Vimeo.

BEKAA VALLEY, Lebanon — They are two faces of what many here fear is a “lost generation” of Syrian refugees.

The tender, smooth face of Batoul, 14, was revealed when she adjusted a traditional headscarf, showing no physical wounds of the brutal war that began in her native Syria five years ago this month.

But as she wiped away a tear and explained the decision her parents made to offer her hand as a child bride at the age of 13, the wounds pushed to the surface: “I feel trapped now. I feel like I am in prison.”

Mohammed, 13, whose family also fled the war in neighboring Syria, tried his best to steel his face with confidence as he spoke of his days working in a metal shop, missing several years of schooling yet holding on to his dream to become a scientist. Still, the sorrow came through every word of a popular poem about the war, which he recited from memory:

“Syria, five years and more of a crazy and selfish and illogical war.

Five years in which souls, hearts and minds have been destroyed…”

These are two faces among more than 4.8 million refugees — about half of whom are children — who fled the war in Syria to neighboring countries and to Europe, spurring a refugee crisis which the United Nations High Commissioner for Refugees has called the worst since World War II.

The conflict began on March 15, 2011 in the cities of Damascus and Aleppo, when President Bashar al-Assad ordered armed troops to move in on what had been largely nonviolent protests.

In the five years since, Assad’s regime has steadily stepped up attacks with tanks and airstrikes against an armed opposition and the civilian population. An amalgam of armed groups fractured into militias and then splintered further into Islamic extremist insurgents including the self-proclaimed Islamic State group.

An estimated 300,000 people have been killed and hundreds of thousands more wounded. In addition to the 4.8 million refugees, there are some 6 million internally displaced people in Syria, according to the United Nations.

A tenuous “cessation of hostilities” was put in place last month, and peace talks are getting underway again in Geneva this month. But few international observers believe the end of the war is in sight. The neighboring countries of Lebanon, Jordan and Turkey are now restricting the wave of refugees trying to cross over from Syria.

And the European Union, which accepted a wave of asylum-seekers over the summer, is now grappling with a realization that the refugee crisis is untenable, and countries there are securing their borders as well.

Meanwhile, in the muddy warrens of the informal tented settlements, where refugees are scratching out an existence in Lebanon, the U.N. food subsidy of $184 per month per family is often not enough. Life is getting harder and harder, particularly for the children. 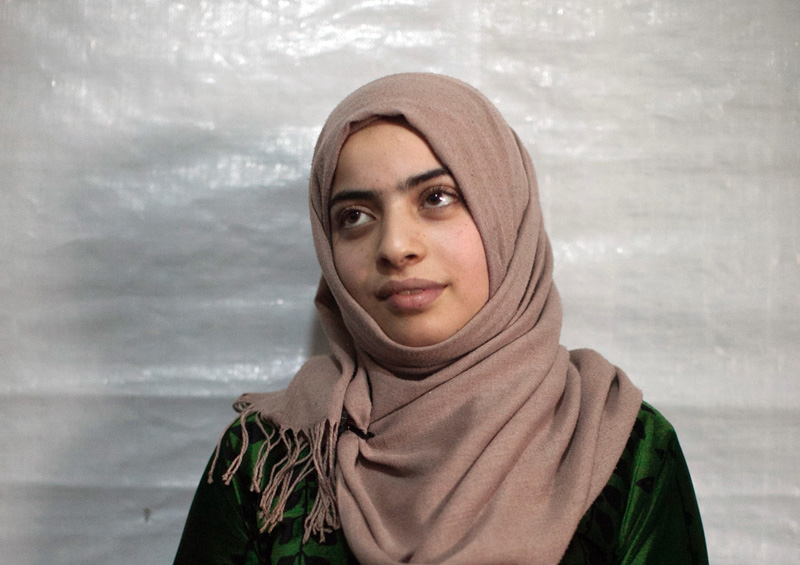 Syrian refugee Batoul was married to her cousin at age 13. Photo by Christopher Lee for The GroundTruth Project

Girls like Batoul are being married off as child brides because their parents can’t afford to keep them or because their families fear sexual assault and harassment, which advocates and aid workers say is rampant in the chaos of the camps. Children of both sexes, they add, also are exploited physically and sexually.

Because men are not permitted to work in the host countries like Lebanon, where official work permits are hard — if not impossible — to come by, children are often forced to work in agriculture or factories or peddle on the streets. Aid workers call it a “lost generation” of Syrian children who have fallen far behind in schooling and who suffer greatly from collective trauma.

“That is ultimately the saddest,” said Maeve Murphy, head of UNICEF in Lebanon’s Bekaa Valley, where many of these refugees have settled to wait out the war. “You see young people whose dreams will never materialize unless they have some stability and unless they are able to access education.”

Batoul sat beside her mother and father, who could not hold back tears as they described escaping the fighting that surrounded their home in Homs, Syria’s third largest city and a key battleground in the uprising against the regime. They recounted the troubles they’ve faced as refugees in Lebanon. Her father, Mohammad, 41, was a mason who made a decent living in Syria pouring foundations for new homes and buildings before the family fled Homs in 2012.

Now, they live in a corrugated tin hut with UNHCR canvas for a roof. Over the last four years, Batoul’s father said all of their savings disappeared. The economic desperation that set in, along with the parents’ deep concerns for their daughter’s protection, forced Mohammad to allow his beloved daughter to be taken as a child bride by her cousin. Both he and Batoul’s mother now regret that decision.

“If God would allow us to undo what we have done, we would do it,” said Batoul’s mother, Amina, 33, through tears which she dabbed with a traditional headscarf. “We put a burden on her that she can’t handle. It was a terrible mistake. We have stolen her childhood.” 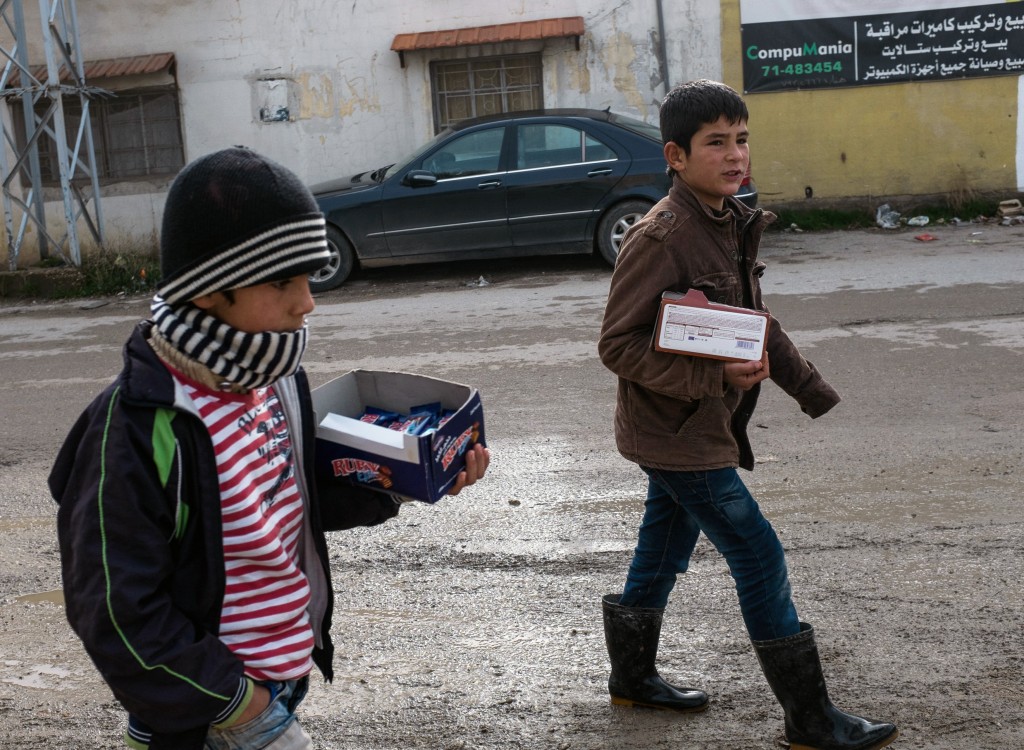 Two brothers sell candy bars in Barelias, Lebanon, to try to earn some income for their family on Jan. 22. Photo by Christopher Lee for The GroundTruth Project

Aid workers and advocates say child marriages are happening at an alarming rate for Syrian girls as young as 12 years old. But because these marriages fall under Islamic religious laws, which by some Quranic interpretations permit brides as young as 9, the government in Lebanon looks the other way.

At the same time, women’s rights organizations have railed against the practice as a human rights violation and as a health risk. The second highest cause of death for girls 15 to 19 is complications during childbirth, according to the World Health Organization.

Amina is despondent over her daughter’s fate, and is worried about her psychological and physical wellbeing. Recently, Amina has begun working with an advocacy center for women and girls that tries to help refugee families avoid the mistake she made. She’s tried to instill this spirit of advocacy for the rights of women in Batoul, as well, who says she wants to be a lawyer.

“I want to help other women and be sure they know their rights,” said Batoul.

Patricia Mouamar, communications director for World Vision in Lebanon, explained that in her experience the number of child brides is on the rise: “There are no official statistics when it comes to early marriage. But I have been seeing refugees for the last five years. And every time I come I meet a family that has to make this difficult decision.”

But Batoul tried to comfort her mother on a visit home on a recent afternoon, saying, “I do have a lot of hope, hope in returning to Syria. There will be better days than these days. Even if there are problems, they will be better than the problems here.” 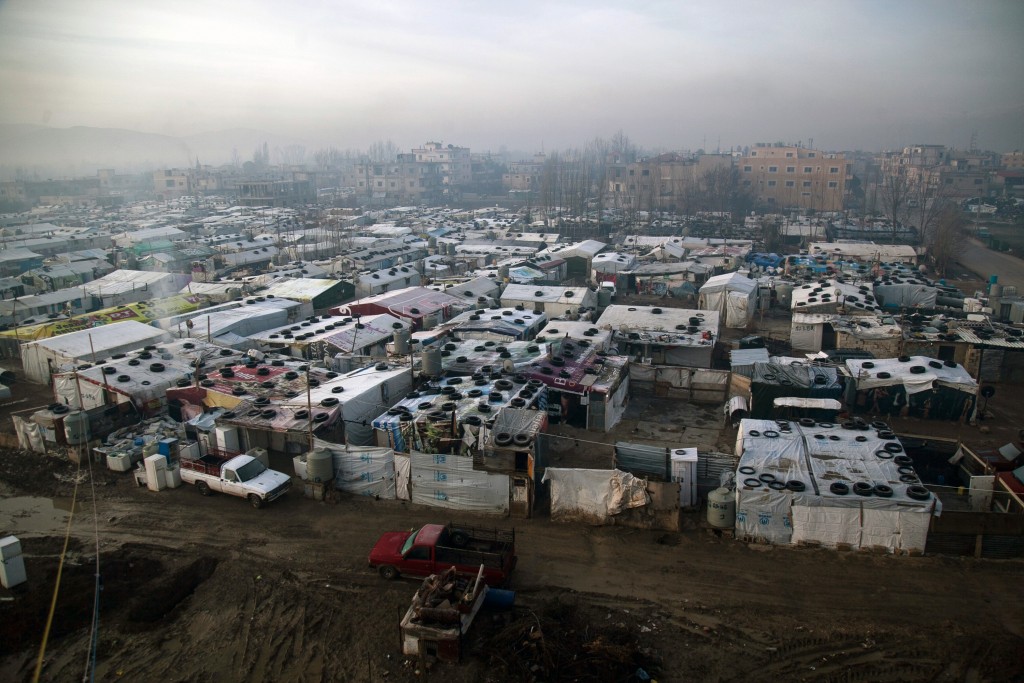 More than 1 million Syrian refugees have fled to Lebanon, some of whom live in this camp in the city of Barelias in central Lebanon. Photo by Christopher Lee for The GroundTruth Project

That sense of resiliency was not uncommon among many of the young people we interviewed in the ramshackle communities of tents that dot the landscape in the flat, fertile land of the Bekaa Valley. Syrian children seemed to be everywhere here, working in tire repair shops and gas stations and sweeping the floors at local produce markets.

“Child labor is a phenomenon that has been increasing. These children should not be on the streets, they should be playing and they should be going to school. Sadly, it is not happening because they have to survive. When it comes to basic instincts for survival, you have to do what you have to do to survive and help your family,” said Mouamar.

At one World Vision youth center, part of a program known as a Child Friendly Space which offers a protective community and remedial schooling, the 13-year-old Mohammed stood out from a crowd of young boys. He puts long hours in at the metal shop, and talked about memories of his home in Syria: “I remember my friends and I miss my school. Syria is so beautiful. More beautiful than here.”

Mohammed carried himself with great confidence, as he recited the poem titled “To Our Country.” The poem, he explained, was written by Syrian sisters Rihan and Faia Younan and became a viral sensation on YouTube.

Many Syrian children have committed it to memory, as he has:

“A war that sneaked through doors to settle down inside the home and humiliate their owners.
A war in which children and women were sold in slave markets.
A war that brought the nation’s mothers to tears, and exhausted its men.
A war that never knew its beginning.
A war that dreams of an end.”

This piece is part of a reporting fellowship that included photographer Christopher Lee and videographer Oscar Durand, whose work was supported in part by World Vision. You can read more about the project and the fellowship at GroundTruth: “Border of Despair: Syrians Fear Losing a Generation to War.” To protect their identity, the last names of children were not included in this story.

Charles Sennott is founder and executive director of the Boston-based GroundTruth Project, which trains and supports a new generation of correspondents in the field.