Taiwan’s highest court on Wednesday cleared a path for the country to make history as the first Asian nation to allow same-sex partnerships.

The Constitutional Court in Taipei ruled on Article 972 of the country’s civil code, which specifies that marriage is between a man and a woman. It found the article violated the constitution’s guarantee of equal rights and freedom of marriage.

The exclusion of same-sex couples was a “gross legislative flaw” that is “incompatible with the spirit and meaning of the freedom of marriage as protected by Article 22 of the Constitution,” according to a press release the court issued Wednesday.

This ruling “sent quite a strong signal” in support of LGBTQ rights throughout the region, said Renato Sabbadini, Executive Director at The International Lesbian, Gay, Bisexual, Trans and Intersex Association.

Now, the country’s government has two years to legalize same-sex marriage through legislation. If it does not, same-sex couples will still be able to marry beginning in 2019.

READ MORE: Why same-sex marriage may soon become a reality in Taiwan

The court’s ruling came in response to two petitions. One of them came from Chi Chia-wei, a 59-year-old leader of the push for LGBTQ rights in Taiwan who has repeatedly petitioned the government to legalize same-sex marriage. The second came from the government of Taipei, which faced a lawsuit after it rejected same-sex couples’ marriage applications, The New York Times reported.

Recent attempts in the Taiwanese legislature to pass a same-sex marriage bill had stalled, and in February, the court decided to hear the case, according to the Taipei Times.

Taiwan has long been considered a progressive leader when it comes to LGBTQ issues. It outlawed discrimination based on sexual orientation and gender identity in employment and education, and since 2011, school textbooks have included information on LGBTQ issues. In 2014, Taiwan’s Ministry of the Interior removed a requirement for transgender people to undergo surgery and psychiatric assessments before changing their identification documents. And Taiwan President Tsai Ing-wen expressed support for same-sex marriage during the presidential campaign. 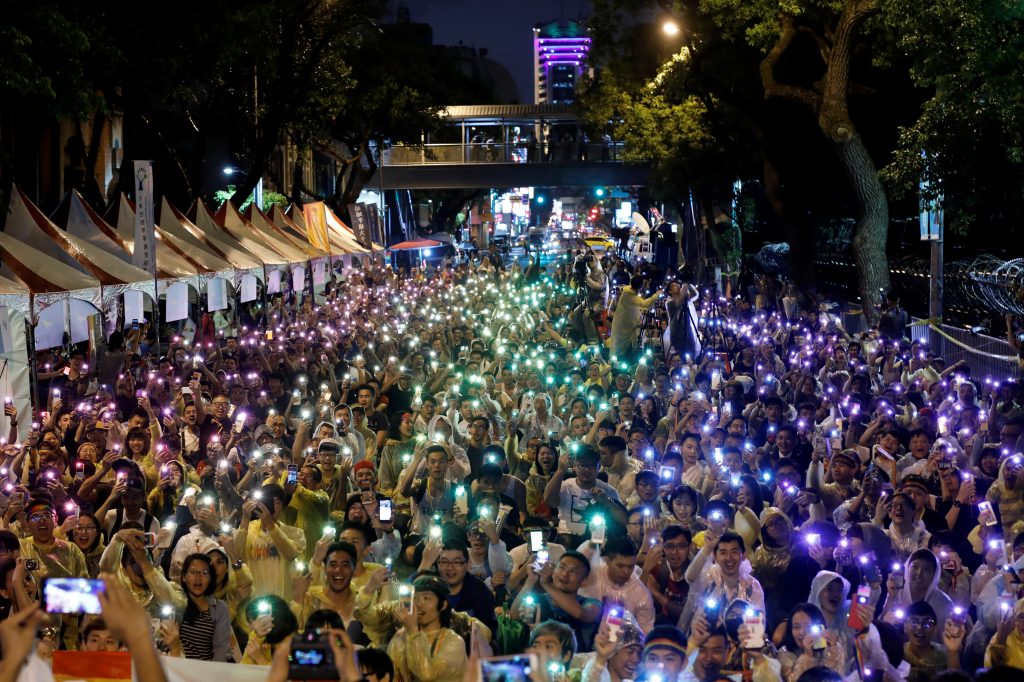 Supporters wave their mobile phone torches in the colors of the rainbow during a rally after Taiwan’s constitutional court ruled that same-sex couples have the right to legally marry, the first such ruling in Asia, in Taipei, Taiwan May 24, 2017. Photo by Tyrone Siu/Reuters

Taiwan's constitutional court to rule same sex marriage 4pm. All eyes on Taiwan becoming a beacon of light for marriage equality in Asia

Imprisoned by the government in 1986, Chi told the Guardian he had been waiting for this day since he came out as gay in 1975. “I am very happy about this result. I have been waiting for justice for 42 years,” he said.

Now, LGBTQ activists hope the decision will prompt lawmakers to include same-sex couples in all existing laws around marriage — but some worry the government will create a special status granting only partial rights to those couples.

Twenty-two countries currently allow same-sex couples to wed, though none are in Asia, according to the International Lesbian, Gay, Bisexual, Trans and Intersex Association. In recent years, a growing movement calling for LGBTQ rights in the region has been met with backlash, led mainly by anti-LGBTQ church groups. In particular, some claimed being gay is a Western trend and at odds with Taiwanese or Chinese culture.

At a hearing for Chi’s case in March, Taiwan’s justice minister Chiu Tai-san claimed same-sex couples were a “newly invented social need and phenomenon,” in contrast to “social norms and mechanisms formed by the people of our nation over the past thousand years,” the China Post reported.

In China, being gay was illegal until 1997 and considered a psychiatric disorder under guidelines from the Chinese Psychiatric Association until 2001. A survey of about 30,000 LGBT and intersex people in China by the United Nations Development Programme, Peking University Sociology Department and the Beijing LGBT Center found that they “still live in the shadows, with only 5 percent of them willing to live their diversity openly.”

A summary of the survey characterized China as being “a country in transition,” with social attitudes toward LGBTQ people growing more progressive among younger generations even as official policies continue to marginalize them. Meanwhile, businesses in China have increasingly recognized the economic potential of LGBTQ-specific products and services.

The court’s decision resonated far beyond Taiwan’s borders with Asian families in the U.S., who said it could encourage others to seek same-sex marriage rights in their home countries.

Clara Yoon is the founder of API Rainbow Parents of PFLAG NYC, a support group for Asian & Pacific Islander LGBT people and their families. As the Korean mother of a transgender son, she hopes the decision will encourage neighboring countries to pass similar measures, she told the NewsHour in an email. It is “great news and sets [a] model for other Asian countries to follow, hopefully in [the] near future,” she wrote.

Aya Yabe, a member of API Rainbow Parents, told the NewsHour the court’s decision is highly personal for her family. Her daughter, who is gay, got married in New York City two years ago.

“Although my daughter has a Japanese passport, she can’t register her marriage in Japan,” she wrote in an email. “After Taiwan’s decision, I am hopeful that Japanese activists will be energized by learning how it was possible to convince the court.”

She added some parents she encounters through the group think gay people do not exist in their home country. That’s a myth Taiwan’s decision may help dispel, she said.

“The Taiwan case will raise the visibility of LGBT people,” she wrote. “The authority’s voice from home countries will be very influential in shifting a cultural outlook on family and diversity, which will lead to acceptance and inclusion of our LGBT children.”

Left: Supporters hug each other during a rally after Taiwan's constitutional court ruled that same-sex couples have the right to legally marry, the first such ruling in Asia, in Taipei, Taiwan, on May 24, 2017. Photo by Tyrone Siu/Reuters