TAIPEI, Taiwan — Voters in Taiwan passed a referendum asking that marriage be restricted to one man and one woman, a setback to LGBT couples hoping their island will be the first place in Asia to let same-sex couples share child custody and insurance benefits.

The vote on Saturday, organized by Christian groups that make up about 5 percent of Taiwan’s population and advocates of the traditional Chinese family structure, goes against a May 2017 Constitutional Court ruling. Justices told legislators then to make same-sex marriage legal within two years, a first for Asia, where religion and conservative governments normally keep the bans in place. 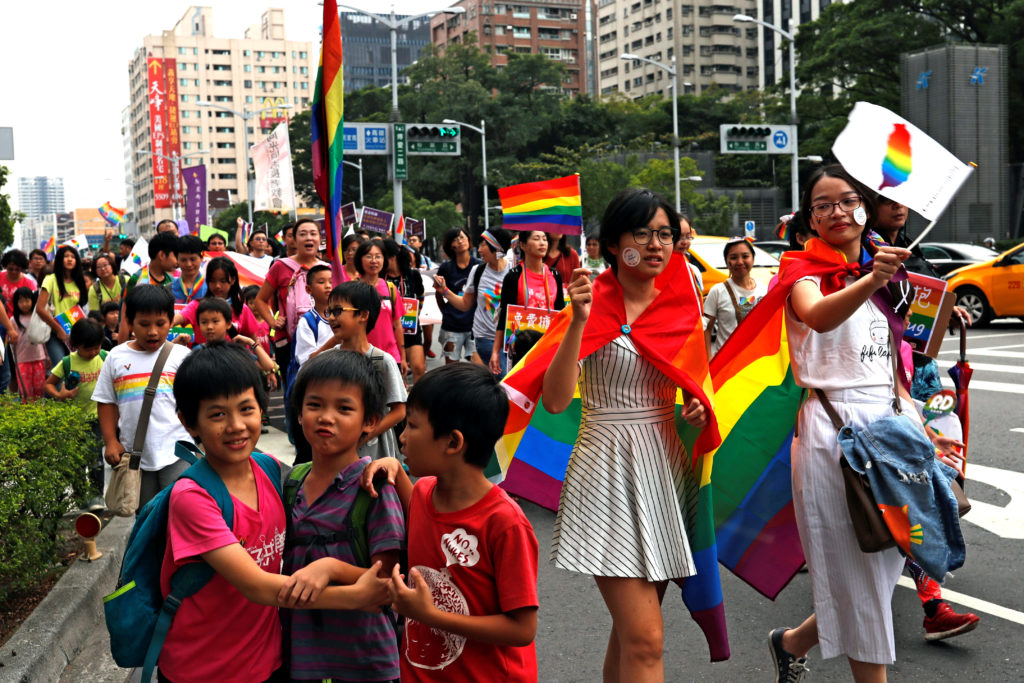 Parents and children take part in a lesbian, gay, bisexual and transgender (LGBT) pride parade after losing in the marriage equality referendum, in Kaohsiung, Taiwan November 25, 2018. Photo by Tyrone Siu/Reuters

Although the ballot initiative is advisory only, it is expected to frustrate lawmakers mindful of public opinion as they face the court deadline next year. Many legislators will stand for re-election in 2020.

“The legislature has lots of choices on how to make this court order take effect,” said referendum proponent Chen Ke, a Catholic pastor in Taiwan and an opponent of same-sex marriage.

Ruling party lawmakers backed by President Tsai Ing-wen had proposed legalizing same-sex marriage in late 2016, but put their ideas aside to await the court hearing.

Taiwan’s marriage equality movement suffers a huge setback as all three anti-marriage equality referendums are now leading by more than two times the vote, with the referendum that defines marriage between a man and a woman winning almost 3 million votes. https://t.co/tDcMWaa7TG

To our LGBT brothers and sisters in Taiwan, I know today feels like a crushing blow. Voters also denied our marriage rights under Prop 8 in CA in 2008.

The road to equality is long, but we will arrive one day, all around the world, just as we have here.

Courts will still consider local marriage licensing offices in violation of the law by May 2019 if they refuse same-sex couples, a Ministry of Justice spokesperson said last week.

“The referendum is a general survey — it doesn’t have very strong legal implications,” said Shiau Hong-chi, professor of gender studies and communications management at Shih-Hsin University in Taiwan. “One way or another it has to go back to the court.”

Amnesty International told the government it needs to “deliver equality and dignity.”

“This result is a bitter blow and a step backwards for human rights in Taiwan,” Amnesty’s Taiwan-based Acting Director Annie Huang said. “However, despite this setback, we remain confident that love and equality will ultimately prevail.”

Taiwanese also elected candidates from the China-friendly opposition Nationalist Party to a majority of mayoral and county magistrate posts, reversing the party’s losses in 2014.