NAIROBI, Kenya — It was a stunning discovery. As rescue divers probed a capsized Tanzanian ferry two days after the disaster and the death toll soared past 200, a man was found in an air pocket, alive.

He was an engineer, regional commissioner John Mongella told reporters. As the badly overloaded ferry overturned on Thursday in the final stretch before reaching shore, the man shut himself into the engine room, the Tanzanian Broadcasting Corporation reported.

Video footage showed the man, barefoot and head lolling, carried quickly along a busy street by medical workers and military personnel as a siren wailed. His condition was not immediately known.

No further survivors were likely. Search efforts were ending so the focus could turn to identifying the dead, Tanzania’s defense chief Venance Mabeyo told reporters at the scene.

Mass graves were dug, and colorfully painted coffins arrived. Hundreds of family members and others waited quietly on the shore.

One woman dropped to her knees in the sand next to the covered body of her sister and wept.

“We have found him after three days and now we are transporting his body to Kamasi for burial,” said Temeni Katebarira, the brother of one victim. 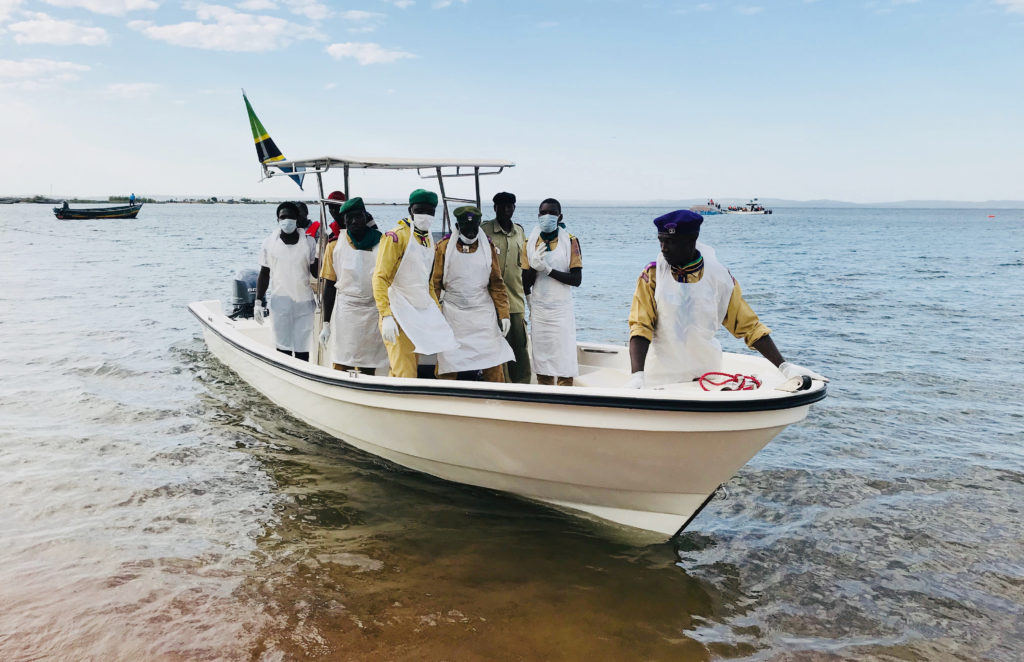 Tanzanian police and rescuers transport bodies of passengers retrieved after a ferry MV Nyerere overturned off the shores of Ukara Island in Lake Victoria, Tanzania, on Sept. 22, 2018. Photo by Jackson Njehia/Reuters

Earlier in the day, workers continued to haul bodies from the water. Abandoned shoes were scattered on the sand.

“From morning till now we have retrieved more than 58 bodies. This includes both children and adults,” said TropistaTemi, a Red Cross volunteer. “Because of the congestion we have not been able to do full totaling. Later, we will do a full tally.”

But the total number of deaths might never be known. No one is sure how many people were on the overcrowded ferry, which officials said had a capacity of 101. It tipped as people returning from a busy market day with their goods prepared to disembark, while horrified fishermen and others watched.

Officials on Friday said at least 40 people had been rescued.

President John Magufuli has ordered the arrests of those responsible. He said the ferry captain already had been detained after leaving the steering to someone who wasn’t properly trained, The Citizen newspaper reported.

“This is a great disaster for our nation,” Magufuli told the nation in a televised address late Friday, announcing four days of national mourning.

The MV Nyerere, named for the former president who led the East African nation to independence, was traveling between the islands of Ukara and Ukerewe when it sank, according to the government agency in charge of servicing the vessels.

Accidents are often reported on the large freshwater lake surrounded by Tanzania, Kenya and Uganda. Some of the deadliest have occurred in Tanzania, where aging passenger ferries often carry hundreds of passengers and well beyond capacity.

In 1996, more than 800 people died when passenger and cargo ferry MV Bukoba sank on Lake Victoria. And nearly 200 people died in 2011 when the MV Spice Islander I sank off Tanzania’s Indian Ocean coast near Zanzibar.

Left: Relatives look at the coffins containing the dead bodies of passengers retrieved after a ferry MV Nyerere overturned off the shores of Ukara Island in Lake Victoria, Tanzania, on Sept. 22, 2018. Photo by Jackson Njehia/Reuters