Can teaching Kenyan girls to save money also save them from HIV?

What would you buy if you had some extra cash in your pocket, right now?

The hands of 13 pre-teen girls shot up. Their fingers stretched as close as they could get to the wooden beams above, competing for the attention of the woman at the front of the classroom. They all wanted to answer the question.

“I would buy fries!” Lynette declared as she jumped up from her bench. Laughter in appreciation of her honesty. One by one, girls stood up and shared their hypothetical purchases, from chips, sausages and sweets to lotions and body oils.

Ann Kamau, the teacher, then asked the girls if they would take money if a boyfriend gave it to them. Their snack food fantasies abandoned, they snapped back to reality. Their answers, in unison: a resounding, “No!”

Kamau agreed. “That money is not for free,” she told the girls in Swahili. “At some point you have to pay, some way or another.”

Instead, Kamau suggested that the girls pitch in at home to earn pocket change.

“Your mom will not want you to pay her back like your boyfriend.”

The takeaway from this lesson was the same as many others from previous meetings: Taking money from men could place a young woman at risk for a situation that no preteen should ever experience. 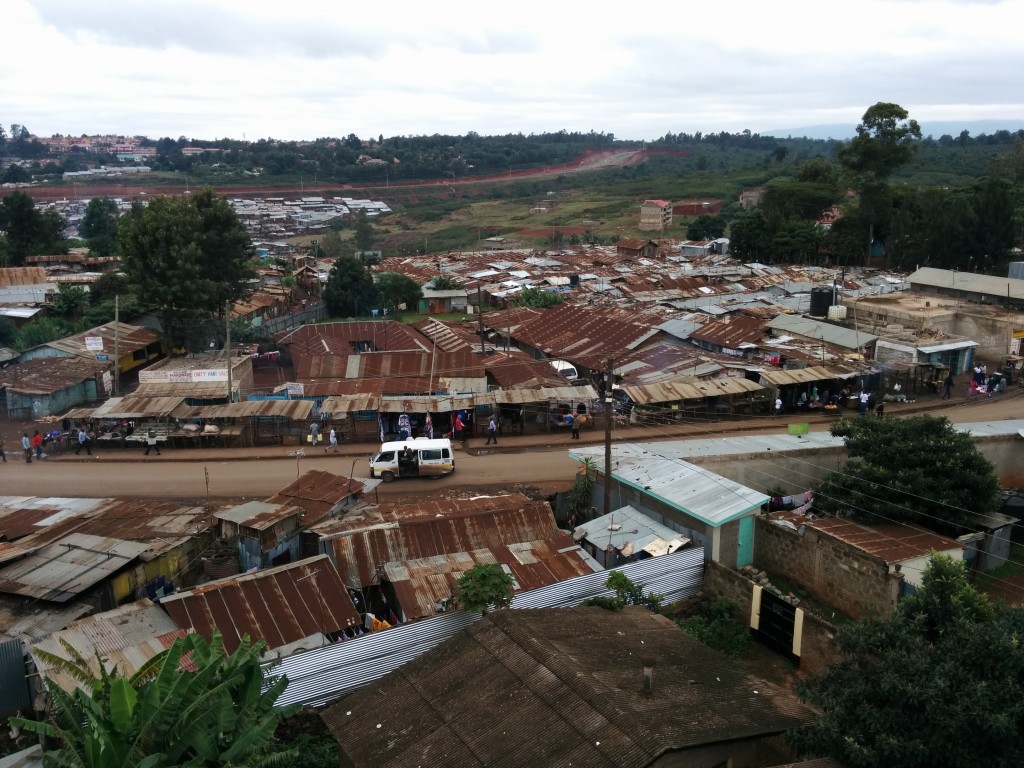 While exact numbers are unknown, roughly 800,000 to one million people live in Kibera, the largest urban slum in Kenya, which borders the capital city of Nairobi. Photo by Ellen Rolfes.

For adolescent girls in Kenya, poverty increases the likelihood of sexual exploitation. With more 50 percent of Kibera’s population under the age of 15, competition for work, even in low-skill tasks, is steep.

It’s common for older men to take advantage of a girl’s need for food, medicine and school fees in exchange for sexual favors. Those sexual favors can have long-lasting consequences, like teen pregnancy, that can anchor her in poverty.

And poverty isn’t the only repercussion. HIV/AIDS is the second leading cause of death for adolescents in southern Africa, after traffic accidents. According to a World Health Organization report, two-thirds of those killed are adolescent girls, most of whom are contracting the disease through unprotected sex. In Kibera, approximately 10 to 25 percent of the population has HIV or AIDS.

“Adolescent girls in sub-Saharan Africa … are growing up in the eye of the perfect storm,” said Susan Kasedde, a senior advisor and team leader on HIV and adolescents for UNICEF. And the situation has not improved in recent years. While HIV-related deaths fell by 30 percent across all age groups, Kasedde said that the number of adolescent deaths increased by 50 percent between 2005 and 2012.

For the girls in Kamau’s group, all of whom live in a slum, and in poverty, the risks are even greater.

“As girls go through adolescence, they take more financial responsibilities in the household, to go and bring in some money,” said Sam Kalibala, a doctor and researcher at the Population Council in Washington, D.C.

“Often the only way that girls can do that is with their body,” he said. “Their body is their main asset, so they have different kinds of relationships. Someone helps pay the rent, the shopkeeper gives her food … and she has to do what he says because he helps provide food for that family.”

Population Council researchers also found that only a quarter of girls have a safe place in their community to meet their friends. Of girls ages 10 to 19 that have already had sex, 34 percent said their first sexual experience was unwanted and 60 percent of the same girls said they were at risk for being raped.

That’s why having a safe space for girls to talk about sex before they become sexually active is extremely important. And Kamau, who lives and owns a beauty supply store located near the school, says she often gets house visits from her mentees. For the girls, Kamau is someone they can trust.

“(Guardians) say it’s not right, a bad omen if you tell them not to have sex. They think it is not a conversation to have.” Kamau said. 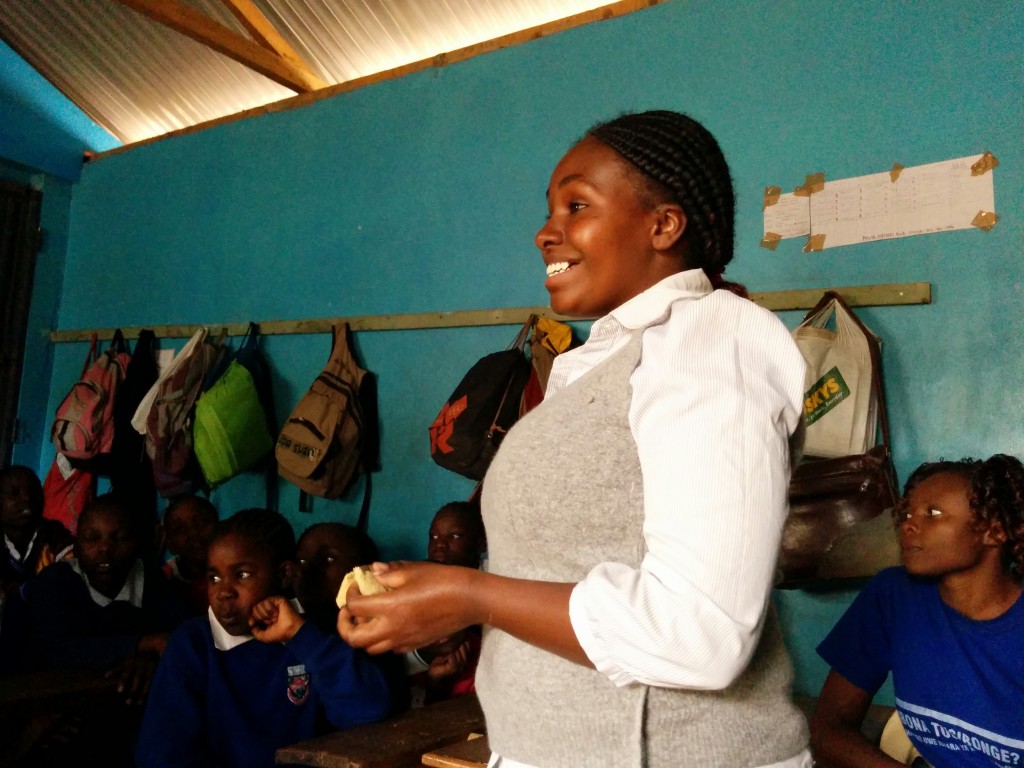 Ann Kamau is a mentor for the young girls in the program. As a young woman who is married and also a mother, the guardians and community leaders trust her as a role model and someone the girls can talk to about subjects that would otherwise be taboo.

In Kenya, a highly religious country, talking about sex is taboo, and most parents simply will not broach the subject with their young daughters.

To talk about sex or even reproductive health, would be to encourage immoral behavior. Mothers will sometimes refuse to get their daughters sanitary pads when they start to menstruate.

The girls learn about menstruation, contraception, condoms, sex and boyfriends through a combination of neighborhood gossip, social media and TV, Kamau said.

Getting a job doesn’t necessarily guarantee less dependence on men, especially at younger ages. Just like Lynette and Eunice, many of the girls in the classroom at Zeyln Academy, some as young as 12, are already working jobs a few hours a week. They help out at a family member’s shop or wash dishes at a restaurant or wash the dirty clothes for a neighbor. In Kenya, youth face high rates of unemployment, and according to the UNDP, almost no one age 15 years or younger can find work outside of the informal economy or traditional activities.

Their employers often are older men. So the simple act of getting a job at such a young age can actually increase vulnerability to abuse and sexual exploitation.

“The process of looking for jobs is a big risk for any girl, because they are often lured by men into situations where they are forced to give sexual favors with the hope that they will get jobs,” Kalibala said. He co-authored an extensive study on the vulnerabilities and stigma associated with HIV and AIDS affecting African youth.

“They are in a very vulnerable position (because) they are supposed to please the man in power who is supposed to give that employment.”

Why Saving is Crucial

By giving girls the tools they need to save even a little bit of their money, the Safe and Smart Savings program aims to help them avert risky and vulnerable sexual behavior when a financial need or crisis occurs. In addition to meeting once a week for a lesson and discussion, mentors help each girl to set up a savings account at the bank, something that might be otherwise impossible.

The Population Council, which started and funded the safe spaces program in Kibera, primarily as a research experiment, worked with local banks in order to create special “Princess” savings accounts for the young adolescent girls. Of the girls in Kamau’s group at Zeyln Academy, approximately 19 — about two-thirds — of the girls have set up accounts.

“The girls think, ‘You can only save if you are very rich,'” said Mercy Nzioki, a project coordinator for the Population Council. The curriculum, coupled with the creation of formal savings accounts, is supposed to help create a culture of saving that Nzioki said can help the girls to stay in school and stay economically independent. 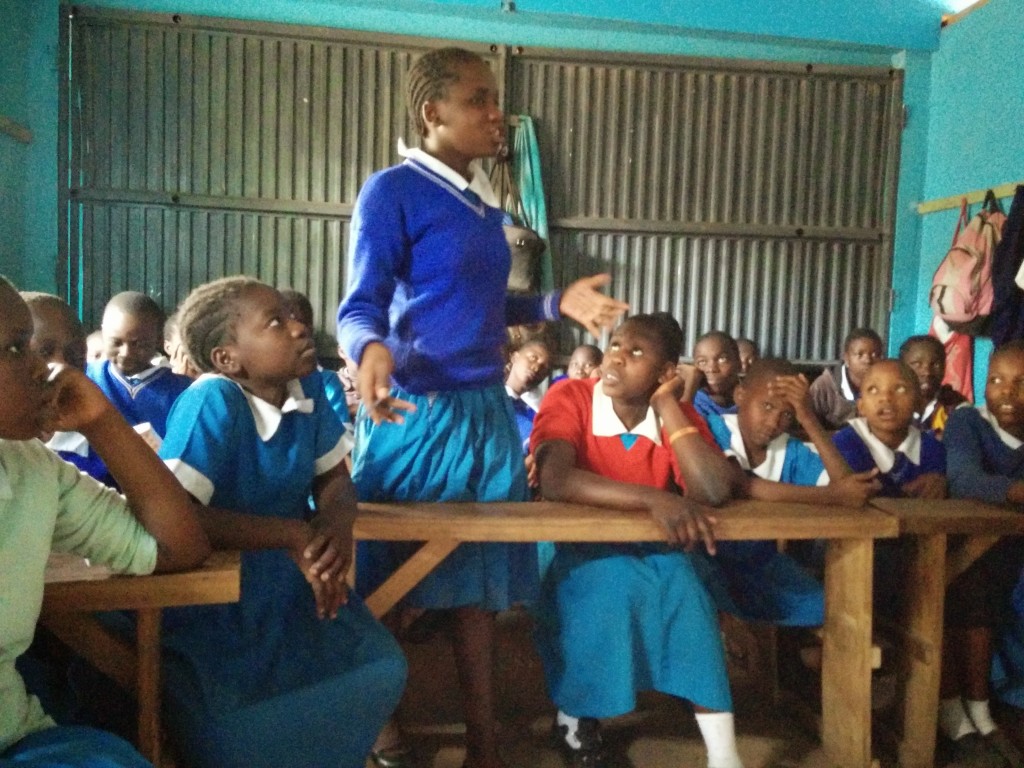 One girl stands up to ask her mentor about how she can get her parents to help her open her own “princess” bank account, where she can put her savings. By placing her money in the bank, it will be safe from theft, fire or familial pressures to hand over the money for other purposes. Photo by Ellen Rolfes

Many of the girls in Kibera said they were socially isolated and therefore had few, if any, networks of support, according to the Population Council. Half of the girls said that they didn’t have any friends and nearly half lived with neither or only one parent.

Kamau said that many of the girls lack the confidence to properly assert what they want. This is why she teaches them about cleanliness and proper dress, how to carry oneself, and why it’s so important to not take money from strangers, especially men.

She also teaches them how to stay safe from abuse. For example, if a girl is earning money by washing clothing for a single man, never enter the house and have the clothing picked up outside, she instructs.

Many of the girls at Zelyn Academy said they want to use their savings to help pay for their school fees for high school; some also expressed interest in college.

So far the Population Council’s program to empower young girls has reached more than 11,000 adolescents in Kenya. The council is exploring the possibility of extending the program to more adolescent girls in other regions of Kenya to see if their initial successes in Kibera can be replicated.

“Even if they had all the knowledge about reproductive health, they are still facing an economic barrier,” said Karen Austrian, an associate with the Population Council’s office in Nairobi. “Financial education is a great first step.”

This segment was produced with the support of the International Center for Journalists+.

Left: Lynette, 12, sits on a bench in her classroom in the Silanga neighborhood in Kibera, Kenya's largest urban slum. As a participant in a "safe spaces" program, she meets once a week to discuss two seemingly disparate subjects: smart savings and safe sex. Photo by Ellen Rolfes.