TAGAYTAY, Philippines (AP) — Red-hot lava gushed out of a volcano near the Philippine capital on Monday, as tens of thousands of people fled the area through heavy ash and frightening tremors. Experts warned that the eruption could get worse and plans were being made to evacuate hundreds of thousands more.

Clouds of ash blew more than 100 kilometers (62 miles) north of the Taal volcano on Sunday, reaching Manila, the bustling capital, and forcing the shutdown of the country’s main airport, with more than 500 flights canceled. The airport was partially reopened Monday after the ashfall eased.

There have been no reports of casualties or major damage so far. A truck, however, skidded out of control and fell on its side on an ash-blanketed road, killing the driver and injuring three companions in southern Laguna province in an accident police said may be linked to the slippery road conditions.

The government’s disaster-response agency and other officials reported more than 30,000 villagers have fled their homes in the hard-hit province of Batangas and nearby Cavite province, but officials expect the number to swell with hundreds of thousands more moving out of harm’s way.

Some residents could not move out of ash-blanketed villages immediately due to a lack of transport and poor visibility. Others refused to leave their homes and farms.

“We have a problem — our people are panicking due to the volcano because they want to save their livelihood, their pigs and herds of cows,” Mayor Wilson Maralit of Balete town told DZMM radio. “We’re trying to stop them from returning and warning that the volcano can explode again anytime and hit them.” 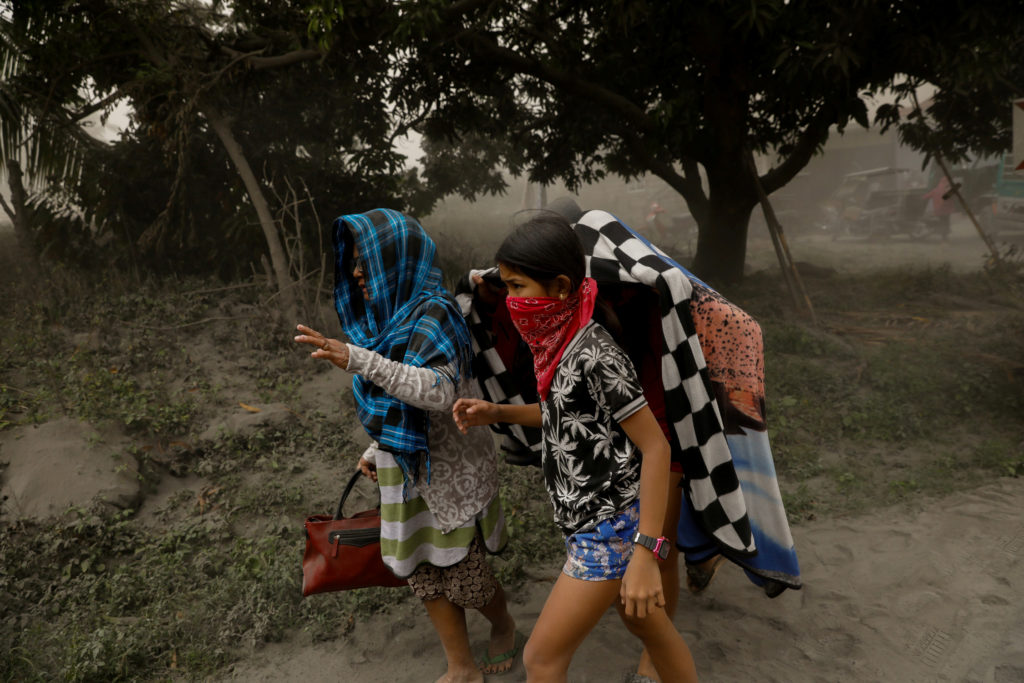 Maralit, whose town lies along the shoreline of Taal Lake surrounding the erupting volcano, appealed for troops and more policemen to stop distraught residents from sneaking back to their high-risk villages.

After a cleanup and ash-laden winds shifted away from Manila, officials partially reopened the main airport and allowed stranded planes to take off Monday. Airport manager Ed Monreal told a news conference that incoming flights can be accommodated once parking bays are freed up, but warned that the airport may be closed again if the danger returns.

President Rodrigo Duterte’s aircraft was able to land in Manila on Monday from his southern Davao city hometown, his spokesman said, adding he saw the extent of the volcanic devastation from the plane.

Taal had been restive for months until it suddenly rumbled back to life Sunday, blasting steam, ash and pebbles up to 10 to 15 kilometers (6 to 9 miles) into the sky, according to the Philippine Institute of Volcanology and Seismology.

The ash and steam column reached a height of only 2 kilometers (about a mile) Monday, with lava fountains spurting less than half of that height before falling into lake waters surrounding the main crater. Lava also spurted from another vent north of the main crater, Renato Solidum, who heads the institute, told reporters.

Frequent tremors and inflation of the 1,020-foot (311-meter) volcano, one of the world’s smallest, however, indicate a major and much more dangerous eruption could still happen, he said.

The government volcano-monitoring agency raised the danger level around Taal three notches on Sunday, to level 4, indicating “a hazardous eruption within hours to days was possible.” Level 5, the highest, means such an eruption is underway and could affect a larger area with high-risk zones that would need to be cleared of people, Solidum said.

It’s difficult to say when Taal’s restiveness will ease, Solidum said, adding that the volcano’s last disastrous explosion occurred in 1965, when more than 200 people were killed.

Large numbers of displaced villagers worried about the homes, farms and cattle they left behind and the uncertain future they face. Irene de Claro, a mother of four, worried about her father, who stayed in their village in Agoncillo town in Batangas while the rest of the family fled in panic.

“My father is missing. We don’t know too what happened to our house because the ash was up to our knees, it was very dark and the ground was constantly shaking when we left,” de Castro told The Associated Press in a school in Lemery town in Batangas. “Most likely there’s nothing for us to return to. We’re back to zero.”

She later paused as the ground shook again.

A small island where the volcano lies has long been declared a “permanent danger zone,” although fishing villages have existed there for years. Those residents have all been evacuated safely, volcanology officials said, adding that there should be a “total evacuation” too of lakeshore communities “at high risk to pyroclastic density currents and volcanic tsunami within a 14-kilometer (8.7-mile) radius from Taal,”

Government work and classes in schools in a wide swath of towns and cities were suspended Monday, including in Manila, to avoid health risks posed by the ashfall. At least four Batangas towns reported power outages.

Taal is regarded as the second-most restive of about two dozen active volcanoes in the Philippines, which lies along the so-called Pacific “Ring of Fire,” a seismically active region that is prone to earthquakes and volcanic eruptions. A long-dormant volcano, Mount Pinatubo, erupted north of Manila in 1991 in one of the biggest volcanic eruptions of the 20th century, killing hundreds of people.

About 20 typhoons and other major storms each year also batter the Philippines, which lies between the Pacific and the South China Sea, making it one of the world’s most disaster-prone countries.

Gomez reported from Manila. Associated Press journalists Kiko Rosario in Manila and Aaron Favila in Tagaytay contributed to this report.

Left: A man walks on a road covered with ashes from the erupting Taal Volcano in Talisay, Batangas, Philippines, January 13, 2020. Photo by Eloisa Lopez/Reuters