The charges against Julian Assange, explained

British Prime Minister Theresa May quickly applauded the arrest in remarks Thursday before Parliament, saying the arrest showed that “no one is above the law.” A judge in London later found Assange guilty of breaching his bail, which could result in a sentence of up to 12 months.

President Donald Trump also weighed in on the issue Thursday after the Justice Department unsealed its indictment of Assange. When asked by reporters whether he still loved WikiLeaks, as he claimed in October 2016 after the organization published Democrats’ hacked emails, Trump said, “I know nothing about WikiLeaks. It’s not my thing.”

Ecuador’s President Lenin Moreno released a video statement on Assange earlier Thursday morning, indicating the move had been planned for some time. Ecuador’s foreign minister had publicly warned Assange earlier in the week that he could not stay at the London embassy indefinitely.

Later, Moreno called Assange a “miserable hacker” and a “spoiled brat” who didn’t pick up after himself. Moreno has accused Assange and WikiLeaks of spying on him and spreading false corruption stories to destabilize Ecuador.

Here’s a look back at WikiLeaks and Assange’s legal battles, and what might come next.

Why Assange was initially arrested

The U.S. indictment against Assange stems from WikiLeaks’ publication in 2010 and 2011 of hundreds of thousands of U.S. military reports about the wars in Afghanistan and Iraq, as well as American diplomatic communications. The material was originally leaked to WikiLeaks by former Army analyst Chelsea Manning.

The indictment includes one count of conspiracy to hack a computer to disclose classified information that “could be used to injure” the U.S. According to the indictment, Assange “conspired” with Manning by helping her crack a Defense Department computer password in March 2010 that provided access to a U.S. government network that stored classified information and communications.

Manning had already supplied Assange and WikiLeaks with other classified U.S. information she had access to as an Army analyst. Manning went on to transmit all the material to WikiLeaks, which published the massive trove in a series of posts between 2010 and 2011.

Manning was convicted by court-martial on violations of the Espionage Act and other charges in 2013. She was later sentenced to 35 years in prison. In January 2017, just days before leaving office, President Barack Obama commuted all but four months of Manning’s remaining sentence. But Manning was jailed for contempt of court last month, after refusing to testify about Assange in the ongoing U.S. grand jury investigation into WikiLeaks.

WikiLeaks’ role in the 2016 presidential election

Separate from the Manning leaks, the U.S. government has been investigating WikiLeaks’ role in the Russian government’s efforts to interfere in the 2016 U.S. presidential election.

WikiLeaks published a trove of embarrassing and politically damaging hacked emails from then-presidential candidate Hillary Clinton’s chief of staff John Podesta and others on July 22, 2016, on the first day of the Democratic National Convention. 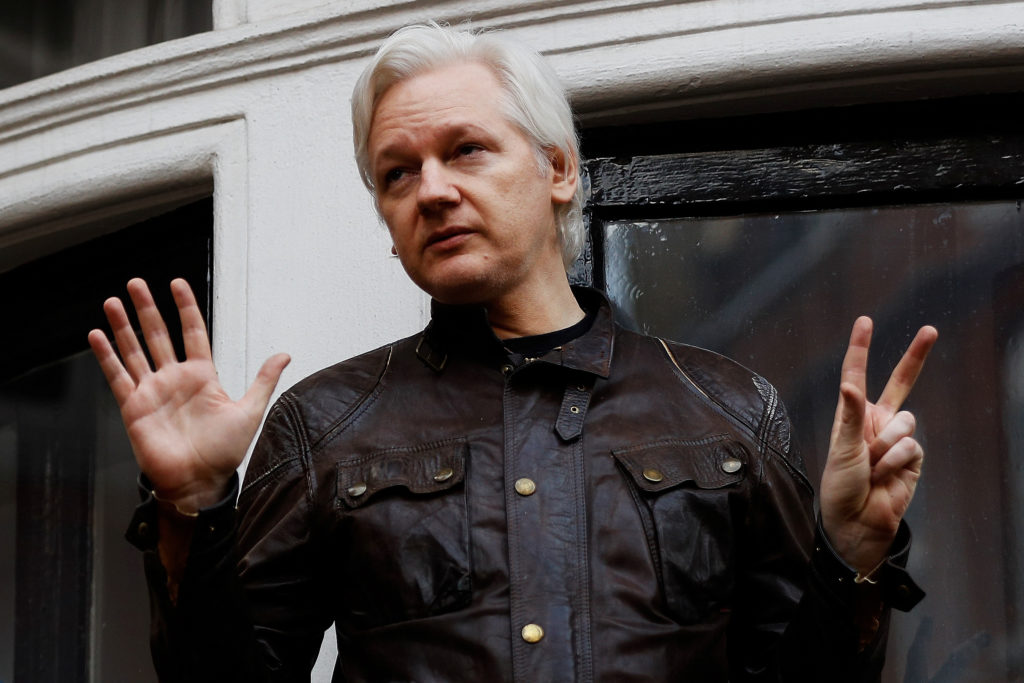 WikiLeaks founder Julian Assange is seen on the balcony of the Ecuadorian Embassy in London on May 19, 2017. Photo by Peter Nicholls/Reuters

U.S. officials have since concluded that Russian military intelligence officers also hacked emails from the Clinton campaign, as well as emails from the Democratic National Committee and the Democratic Congressional Campaign Committee. The U.S. intelligence community said that the hacks were carried out under the direction of Russian President Vladimir Putin and as part of a larger campaign to influence the 2016 election.

Trump frequently praised WikiLeaks during the election, saying at one rally that “I love reading those WikiLeaks.” At another event he called the hacked emails a “treasure trove” of information.

Last July, as part of his investigation into Russia election interference, special counsel Robert Mueller indicted 12 Russian intelligence officials with carrying out the Democratic hack as part of Russia’s larger influence campaign. According to the indictment, the officials obtained the emails the intent to “release that information on the internet under the names DCLeaks and Guccifer 2.0 and through another entity” which is WikiLeaks, which in the indictment is named as “Organization 1.”

Donald Trump Jr. has disclosed messages showing he corresponded with WikiLeaks for about 10 months during the 2016 campaign. The messages show he stopped corresponding with the organization in October 2016, but WikiLeaks kept sending him messages through July 2017.

In some of the messages, obtained by The Atlantic, WikiLeaks reportedly offered damaging information on Hillary Clinton in exchange for Donald Trump Jr.’s help appointing Assange as U.S. ambassador to Australia if the elder Trump won the election. A lawyer for Donald Trump Jr. has said the president’s son did not know the specifics of the material being offered, and Donald Trump Jr. has not been charged by U.S. law enforcement officials in the matter.

Stone’s role in the matter has been more complex. In January, FBI agents arrested Stone and charged him with obstruction of justice, lying to the FBI and other charges as part of the special counsel’s Russia Investigation.

Prosecutors later said they obtained through search warrants “Stone’s communications with Guccifer 2.0,” which prosecutors claim was the group of Russian intelligence officers posing as a Romanian hacker, “and with Organization 1,” referring to WikiLeaks. Prosecutors have also said Stone engaged with both entities to find out what kind of material had been stolen from the Democrats, and how he hoped it could be used to help Trump’s campaign.

Stone, whose trial is set for Nov. 5, has claimed he “will be vindicated” and that he was falsely swept up in the special counsel probe. In his report on the investigation, Mueller said that he was unable to establish any evidence of collusion between the Trump campaign and Russia, according to a summary letter of the report written by Attorney General William Barr.

What’s next for Assange?

A lawyer for Assange said he would fight extradition to the U.S., and that his arrest sets a dangerous precedent for the rights of journalists.

Assange is set to appear in a London court May 2 via video-link from prison in relation to the extradition case.

Left: WikiLeaks founder Julian Assange is seen in a police van, after he was arrested by British police, in London, Britain. Photo by Henry Nicholls/Reuters