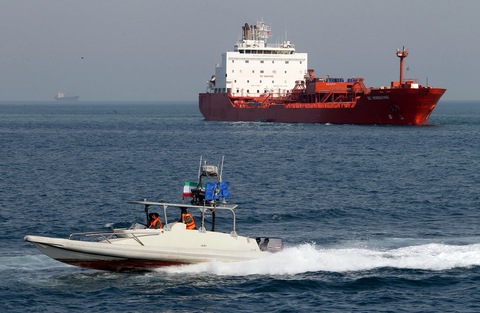 An Iranian Revolutionary Guard speedboat cruises past an oil tanker off the port of Bandar Abbas, southern Iran, on July 2, 2012. Photo by Atta Kenare/AFP/Getty Images.

By Toni Johnson, and Robert McMahon, editor for the Council on Foreign Relations

Since 2010, the United States and international partners have ratcheted up sanctions as reports surfaced of the country’s progress on potential nuclear weapons capability, although the regime regularly denies such a goal.

The International Atomic Energy Agency has been issuing regular statements of concern in recent years, and in a June 2013 speech Director-General Yukiyo Amano said Iran’s progress in uranium enrichment and heavy water projects was in “clear contravention” of U.N. Security Council resolutions.

Since early 2012, the United States has led a campaign to accelerate the pace of sanctions, focusing on Iran’s energy and financial sectors. The EU also has imposed sanctions on oil purchases from Iran. Overall, sanctions have sharply cut back oil exports, isolated Iran from international banking systems, and contributed to a big drop in the value of its currency. But a debate over the efficacy of these sanctions persists because Iran has continued to pursue its nuclear program.

The long list of U.S. economic and political sanctions against Iran has roots in the 1979 Tehran hostage crisis. On Nov. 14, 1979, President Jimmy Carter declared an emergency and ordered a freeze on all Iranian assets “which are or become subject to the jurisdiction of the United States.”

Additional sanctions were imposed when, in January 1984, Iran was implicated in the bombing of the U.S. Marine base in Beirut, Lebanon. The United States added Iran to its list of countries that support terrorism (in this case, the Lebanon-based militant group Hezbollah), banning U.S. foreign aid to Tehran, and imposing export controls on dual-use items.

Trade and investment. On April 30, 1995, President Bill Clinton announced a comprehensive ban on U.S. trade and investment in Iran, a move codified by Executive Order 12959 (PDF). In March 2010, President Barack Obama, like George W. Bush, renewed Clinton’s executive order banning U.S. trade and investment with Iran. In a series of new steps taken in late spring 2013, the Obama administration added to the growing list of sanctioned dealings, expanding its blacklist of Iranian petrochemical companies and targeting Iran’s automotive industry for the first time (because some parts are believed to have dual uses for equipment used in nuclear infrastructure). However, the administration lifted the sanctions that barred sales of consumer communications equipment and software to civilians to help them circumvent official controls.

Nuclear materials. The Iran and Libya Sanctions Act of 1996 (ISA) was aimed at denying Iran access to materials to further its nuclear program by sanctioning non-U.S. business investment in Iran’s energy sector. While the act has been seen as a blueprint for possible actions aimed at foreign support of Iranian weapons development, in practice the measure has proven largely symbolic. Kenneth Katzman, an Iran analyst at the Congressional Research Service, writes that successive U.S. administrations from 1998 until 2010 “hesitated to confront companies of partner countries” and did not make any determinations of ISA violations in that period. But the Obama administration, he writes, “has used ISA authorities to discourage companies from continuing their business with Iran.” In May 2013 the departments of State and Treasury imposed sanctions — including a visa ban on corporate officers — under the Iran Sanctions Act and the Iran Threat Reduction and Syria Human Rights Act of 2012 against the Ferland Company of Cyprus and Ukraine.

Financial dealings. The U.S. Treasury Department administers a vast array of financial sanctions against Iran, from bans on the importation of gifts over $100 to laws barring financial dealings with Iranian entities. Efforts to ban Iranian banks from accessing the U.S. financial system have also increased in recent years. In November 2011, the United States designated the entire Iranian banking regime as potentially aiding and abetting terrorist activities, but the measure fell short of sanctioning the country’s central bank. President Obama also issued an executive order in November 2011 targeting Iran’s oil revenue by stopping foreign financial institutions from conducting oil transactions with Iran’s central bank, which handles most of the country’s oil payments. In March 2012, in a move required by Congress to implement the new sanctions, the president certified that the global oil market was strong enough to support the loss of Iranian oil. The new measures put pressure on heavy importers of Iranian oil such as South Korea, India, Turkey, China, and South Africa. Japan and several EU countries have been given exemptions, and many of the others have reduced their oil trade with Iran. Meanwhile, among the administration’s June 2013 steps was an executive order that seeks to devalue the rial even more by penalizing foreign banks that trade or hold the currency.

Assets. Following the terrorist attacks in New York and Washington in 2001, President Bush authored Executive Order 13224, freezing the assets of entities determined to be supporting international terrorism. This list includes dozens of individuals, organizations, and financial institutions in Iran. Over the years, Washington has sanctioned dozens more individuals and Iranian institutions, including banks, defense contractors, and the Revolutionary Guard Corps. In October 2011, the Treasury Department added five Iranians, including four senior officers of the IRGC’s elite paramilitary Quds Force, to this list for plotting the assassination of the Saudi ambassador to the United States. It also added Iranian commercial airline Mahan Air for providing financial, material, and technological support to the IRGC and Quds Force. The IRGC-Quds Force was also listed in Executive Order 13572 (PDF) of April 2011 aimed at blocking properties of individuals and entities for supporting the Syrian regime’s human rights abuses and suppression of anti-government protests. A bipartisan group of U.S. senators in May 2013 proposed further legislation that seeks to cut off Iranian access to roughly $60 billion to $100 billion in foreign exchange reserves held in foreign bank accounts.

Refined gasoline. In July 2010, President Obama signed into law a measure aimed at penalizing domestic and foreign companies for selling refined gasoline to Iran, or for supplying equipment in Iran’s bid to increase its refining capacity. In signing the measure, Obama declared the act, H.R. 2194, “a powerful tool against Iran’s development of nuclear weapons and support of terrorism. China and Russia quickly opposed the unilateral U.S. measure on grounds that the move — aimed at closing loopholes in the U.N. sanctions regime — could hurt their business interests while undermining diplomatic overtures to Tehran.

The EU has imposed a number of tough sanctions. The EU began embargoing exports of oil from Iran on July 1, 2012, contributing greatly to a drop in exports to about 1.25 million barrels, or half of the 2.5 million barrels it exported daily in 2011, according to the nonpartisan U.S. Congressional Research Service. Those exports dipped to 700,000 barrels per day in May 2013, according to industry sources cited by Reuters.

In June 2010, the European Union enacted measures similar to those approved by the U.S. Congress that ban investment and assistance to Iran’s energy sector, and a series of prohibitions was placed on European firms doing business in the country. The EU also added to its list (PDF) of designated individuals, companies, banks, and organizations targeted for asset freezes. In response to a touch IAEA report in November 2011, the UK and Canada also imposed new sanctions similar to U.S. restrictions on the activities of Iran’s central bank. And in May 2013, Canada’s foreign affairs minister John Baird announced a range of new measures including a ban on imports and exports from Iran that added 82 new entities to an existing list.

The U.N. Security Council has wrestled with imposing sanctions on Iran since 2006 due to Iran’s failures to comply with International Atomic Energy Agency requirements and its continuing uranium-enrichment activities. In December of that year, the council approved the first of four binding resolutions authorizing bans on exports of nuclear, missile, and dual-use technologies; limiting travel by dozens of Iranian officials; and freezing the assets of forty individuals and entities, including Bank Sepah and various front companies. The measures also call on states to refrain from business with Iran, and authorize the inspection of cargo carried by Iranian shippers. In June of 2010, the Security Council issued a fourth round of sanctions under Resolution 1929 — putting the squeeze on Iran’s Revolutionary Guards-owned businesses, its shipping industry, and the country’s commercial and financial service sector. Efforts to push through a fourth round of economic noose-tightening at the United Nations, while successful, were nonetheless complicated by resistance from Russia and China, which are linked to Iran by important economic and political interests.

Navigating the Road Ahead

Experts are divided on the effectiveness of sanctions as a tool to force rogue states to abandon their weapons programs. In the cases of Libya and Iraq, many analysts note the role economic sanctions had in inhibiting the development of weapons programs (though in the case of Iraq, the full extent of their effectiveness was not known until after the U.S.-led invasion of 2003). But sanctions, and their impact on the Iranian economy, were clearly an issue on the mind of the country’s elites ahead of June 14, 2013 presidential elections. The country’s supreme leader, Ayatollah Ali Khamenei, said ahead of the polls that candidates should “pay due attention to the economy which has turned into a scene of imposed challenge with aliens [Western powers]”, the Financial Times reported.

Washington hopes that squeezing Iran’s economy will pressure the country’s leadership to alter course on its nuclear program. U.S. officials in mid-2013 said sanctions were having a significant impact on the Iranian economy, particularly sectors like energy and shipping, said U.S. Treasury Undersecretary David Cohen. News reports have shown that the cost of doing business with Iran has become so onerous that many firms are dropping their transactions entirely. Iranian officials have continued to dismiss sanctions as ineffective, but some have also said lifting them should be a major point of any new talks. In April and May 2012, Iran met with the permanent members of the U.N. Security Council and Germany (P5+1) to discuss its nuclear program. However, those talks have yielded little movement on either side. Whether these sanctions will deter the nuclear program remains up for debate.

Valerie Lapointe contributed to this report. A version of the backgrounder originally appeared on the Council on Foreign Relations’ website. View all of the PBS NewsHour’s World coverage.

How students experience and cope with racist stereotypes

By Sharon Austin, The Conversation

By Kenyatta R. Gilbert, The Conversation

White House and prosecutors lay out arguments ahead of impeachment trial

Migrants cross river into Mexico after being refused passage to U.S.