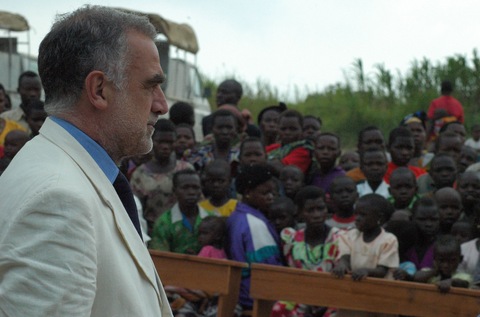 On Thursday’s NewsHour, we feature an excerpt of the film “Prosecutor,” which follows Luis Moreno-Ocampo, the chief prosecutor of the International Criminal Court. It’s part of our series in partnership with The Economist magazine showcasing the art of filmmaking.

“Prosecutor” was directed by Barry Stevens, a writer and filmmaker, who has worked on dozens of documentaries. He began his film career as an actor, then wrote drama, and added documentary writing, including films such as the International Emmy Award-winning Gerrie & Louise (1997), about the South African Truth Commission.

Here’s what Stevens told us about the making of “Prosecutor”:

Filming had some real challenges. We filmed in eight different countries. We had extraordinary behind-the-scenes access. The film is up close and personal, with this highly flamboyant man and his team in cabinet meetings, at massacre sites, in court, but also at home. So you see things happen on the world stage — but from backstage. The film veers quite a bit between luxurious places, like the huge, white mansion where the President of Uganda haggles with the prosecutor, to the refugee camps, the United Nations, then the quiet bourgeois canals of The Hague. There is a bit of a disconnect between the formality of the courtroom and the violence of the crimes they are dealing with.

We made an actuality film, but also it’s highly critical. This is not a commercial for Moreno-Ocampo or a simple-minded human-rights-in-Africa film. We give a lot of space to the Court’s most articulate critics, like Mahmoud Mamdani. There are legitimate questions about spending hundreds of millions of dollars to prosecute a few criminals and maybe making peace less likely when you do it.

Another controversy is that some people are mad that the prosecutor will go after, say, the Americans or the Canadians or the Israelis. The other side is mad because the prosecutor won’t ever dare to go after the powerful. And the thing that I am proud of in this film is that we have made a film that puts you right in the heart of these big questions, but in a very personal, human way. You can see the interplay between power and justice playing out in front of you. And now that Qaddafi is under the prosecutor’s lens, we’re seeing all these questions becoming even more prominent.