Paul Salopek Answers Viewer Questions About His Trip Around the World

Paul Salopek has spent much of his life eschewing convention. The two-time Pulitzer Prize-winning journalist has canoed through the Congo rain forest and spent months riding on a mule through rural Mexico. He’s been detained by Sudanese officials and has reported from the ground on the war in Afghanistan.

But Salopek is about to embark on a quest that will rival all that. Beginning in January, he will set out from Africa’s Great Rift Valley on a seven-year, 21,000-mile journey tracing the believed path of ancient human migration. And he’ll do it all — or as much as physically possible — on foot. 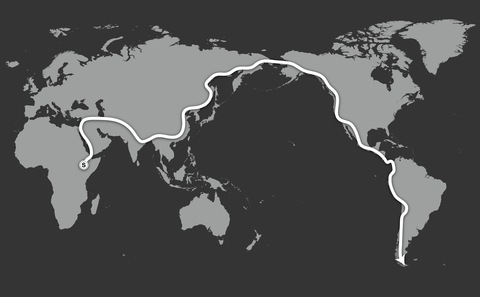 Salopek’s route will begin in Africa and end at the tip of South America. Map by National Geographic

The voyage, which is funded in part by National Geographic and the Knight Foundation, will incorporate modern gadgets such as GPS trackers and a handheld video camera to help others follow along.

In anticipation of the trip, NewsHour correspondent Hari Sreenivasan sat down with Salopek Monday to discuss the ins and outs of preparing — logistically and mentally — for one of the most ambitious reporting projects ever undertaken.

The Pulitzer Center is the education partner for the walk and is soliciting stories from students who are inspired by the project. For more information, visit their website.