This Syrian mother fled ISIS while pregnant. Her courage has stayed with me ever since

It was the tiny baby in her lap — a little girl with a shock of black hair who wasn’t yet big or strong enough even to lift her neck — that first led our team to meet Batoul just over one year ago. She sat there, holding her recently born daughter, not even 2 weeks old, like an island of maternal calm amid the sea of those fleeing the fight against the Islamic State group in a makeshift camp for the displaced in Ain Issa, in northern Syria. All around was chaos and a swirl of humanity, everyone trying to find a place after having lost theirs.

And then there was Batoul. Smiling, welcoming us to sit down and talk with her. Happy to be holding her baby. Relieved that they both were alive.

I sat down to speak with her, sweat from the 100-plus-degree heat soaking through my shirt, my jacket, through my head scarf. She looked as if she barely noted the temperature.

Just then the fight to retake Raqqa from the so-called Islamic State (ISIS) was in full swing. The U.S.-backed Syrian Democratic Forces battled street-by-street to take the city from ISIS; tens of thousands of families fled Raqqa. The NewsHour team and I had come to Northeast Syria to see the end of this fight and to talk to the people whose lives had become ensnared in both the battle to defeat the militant group and liberate the land the extremists had captured and held for years.

All around was chaos and a swirl of humanity, everyone trying to find a place after having lost theirs.

Batoul was one of them. Her family had lived in Raqqa, she told us. ISIS had jailed her husband for selling cigarettes. He had lost his mental health after he returned home. She had cleaned houses to support their children during his imprisonment. When she found out she was pregnant with her next child, this tiny baby girl I now saw, she knew she would not give birth under ISIS, whatever came. So she summoned up her courage, gathered all her gold and life savings, and paid a smuggler to sneak them out of their city under siege. She, her husband and her three small children left in darkness as part of a five-car convoy; at any moment she thought they might die. ISIS snipers stood ready to kill those who tried to escape. Coalition airstrikes — aimed at routing ISIS from the city — fell from the sky. And ISIS had laid landmines everywhere to stop those trying to find safety in liberated areas.

Batoul and her family were the first car in the convoy, which left just before dawn. The fifth and last vehicle behind them exploded when the family in it drove over an ISIS landmine. They could not stop to help — or to grieve. They had to keep going if they were to survive.

Fortune sided with them. They landed in liberated territory held by the Syrian Democratic Forces, a U.S.-backed militia. And Batoul, pregnant and on the edge of giving birth, had her child a few weeks later. We met her 13 days after that.

I returned home. And I wondered what had become of Batoul. I thought of her so often. Her strength. Her bravery. Her clarity about why she had mustered the courage to lead her family out of Raqqa. Her vivid description of the hell of living under ISIS, of covering her toddler’s eyes with her hands every time they left the house for fear of her seeing someone murdered — shot or beheaded or hanged — right before her eyes. Her instinct to protect her new baby by giving her a chance outside of ISIS’s grip. And our shared maternal thought, never spoken, that this baby looked awfully small — I knew Batoul didn’t know if her baby would make it. As she handed the little girl to me, I wondered how this feather of a new life would survive. I remembered holding my own babies at that age and they felt so much sturdier, so much more certain to make it to their first birthday.

I had gone home and gone back to photos of Batoul and her children. I wondered whether I would have the bravery required if I were in her shoes. And I felt certain that if I returned to the region, I would have to try and figure out what came next in their story.

This past August I went to find Batoul. I had known she had found a job at a nongovernmental organization in the camp. And I had heard she was still there. But my fixer told me not to get my hopes up; it’s likely she left, he said. Many people from Raqqa have left the camp and gone home.

We went to the offices of the NGO where we heard she worked. The international staff looked a little bit perplexed as to why we were there, but they said Batoul did indeed still work for them. And they pointed us to the tent where she lived.

My eyes welled up when a smiling and confident Batoul stepped out from behind the curtains of the blue tarp she and her family call home.

In her arms she held a now very healthy and smiling little one, a 1-year-old chunky baby who showed no signs of having once been a frail newborn whose life hung in the balance. 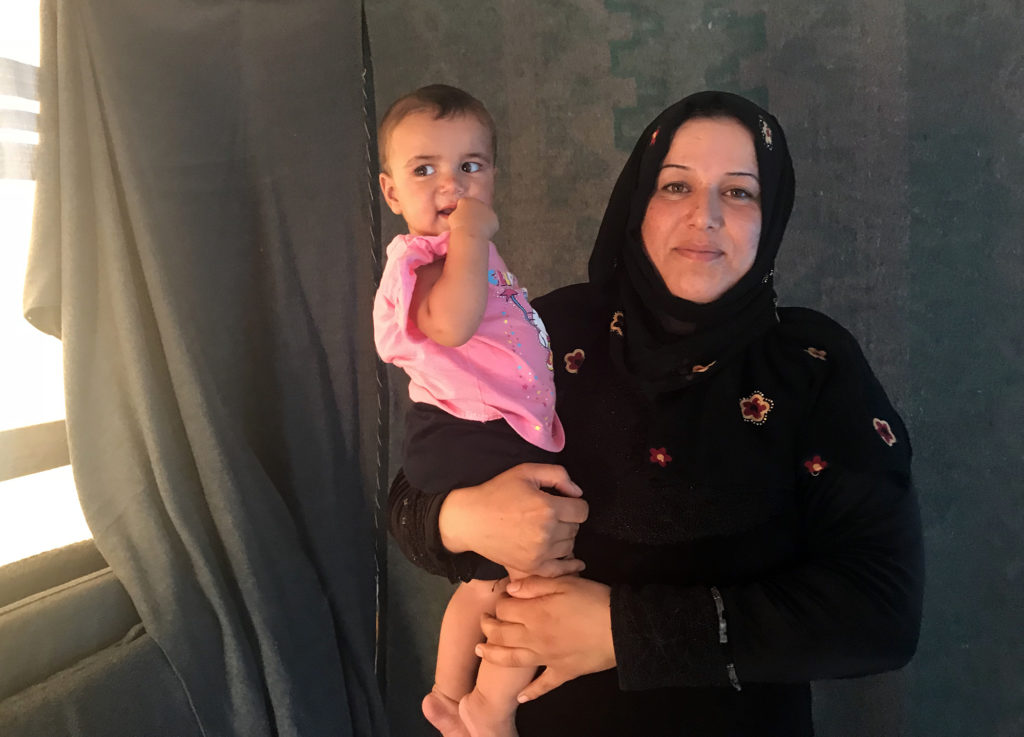 Batoul escaped the fighting in Raqqa, Syria, and now works for an NGO. Photo by Gayle Tzemach Lemmon

We hugged. And I began asking questions.

“When I left [ISIS] territory I thought I would die. And then, when we reached this camp, I thought I would deliver my baby and leave,” she said. Then, just after we met her last year, both she and her new baby grew sick. Doctors told her she could not breastfeed; only formula given to her by Doctors Without Borders helped nourish her baby to health.

“I didn’t think I would survive,” she recounted. “I thought my daughter would die. Every day things were getting worse.”

She was out of money and out of hope. And then she received a job offer from the NGO. That job changed just about everything.

“Praise be to God,” she said. “So much incredible change has happened in my life in the last year, I never thought that I would have the chance to work and support my family. This job allows me to serve my family; it makes me proud.”

What brings her most joy, she said, was seeing her older children go to school every day.

Airstrikes destroyed her house in Raqqa, which was part of why she still lived in the camp. She earns a good salary but her husband’s medical bills make it impossible to save up enough money to buy a new home or rebuild her own. She had gone to see it for herself, she told me, and it was so very sad. But she said she was not mourning that loss because she had endured so much other loss already.

“Now I feel safe. With ISIS, we were watching death and we did know know what to do.”

“Until the last moment, ISIS would never give up,” she said. “If there were no jets or airstrikes, ISIS would take Hasekeh [a city west of Raqqa], too. They are ready to die.”

And safety from ISIS — and all those like them, she said — is what she cares about the most.

“Now I feel safe. With ISIS, we were watching death and we did know know what to do,” she said. “Now we have a new era.”

That hope for what is ahead is what keeps her going, she said.

“I feel the future will keep getting better, I am not afraid, I am not tired,” she said. “I feel safe and that is the most important part.”

Mustafa Alali contributed to this report.

Left: Batoul's baby girl was 13 days old when the NewsHour team first met her in 2017. Photo by Jon Gerberg