As the death toll from the collapse of a highway overpass in Kolkata, India, rose to 26 on Saturday, three employees of the Indian construction company that was building it appeared in court, facing charges of murder.

The three appeared in Metropolitan Magistrate Court in Kolkata after being arrested Friday and could be sentenced to life in prison or death if they are found guilty, a chief prosecutor told Agence France-Presse. Several others have been detained and are also being questioned.

Meanwhile, India’s political leaders are calling out the construction company, IVRCL Infrastructure Inc., for having a track record of mishaps, saying that any other agencies engaged in contracts with it should take caution.

About 300 feet of elevated highway, which was being built atop a bustling commercial district to ease traffic, gave way just hours after workers poured concrete into the framework on Thursday, crushing pedestrians and drivers below.

Rescue workers on Saturday were still breaking through the treacherous mounds of concrete, steel and other debris. They pulled out two more bodies, which raised the death toll to 26, while 18 others were still being treated for wounds, according to the Associated Press. 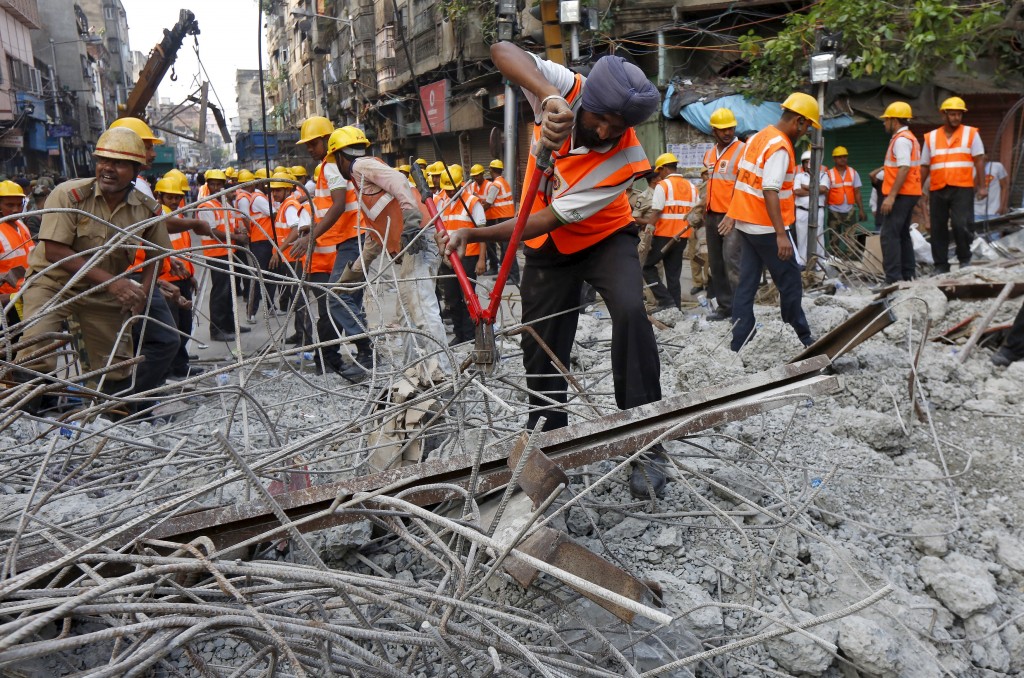 A rescue worker cuts iron rods amidst the debris at the site of an under-construction flyover that collapsed on Thursday in Kolkata, April 1, 2016. Rupak De Chowdhuri/Reuters

The minister of urban development, housing and transportation in the state of Jharkhand said that the state had blacklisted the IVRCL in February, citing numerous contract delays.

“What happens, or should happen with blacklisting, is that other states sit up and take note of the company’s image and do not award any future projects as well,” Chandreshwar Prasad Singh told the New York Times.

But representatives of IVRCL, which is a major construction company with projects in India, Sri Lanka and Africa, have maintained that they did not cut any corners.

The company’s director of operations told The Hindu that he is unable to comprehend what could have happened and that “it was like an act of God.”

Left: Firefighters and rescue workers search for victims at the site of an under-construction flyover after it collapsed in Kolkata, India, March 31, 2016. Rupak De Chowdhuri/Reuters