WASHINGTON — A proxy battle with Russia in Syria and multiple Russia-related investigations in the U.S. will follow Secretary of State Rex Tillerson to Moscow next week on a trip designed to test the Trump administration’s hopes for closer ties to the former Cold War foe.

Tillerson will make the first visit to Russia by a Trump administration official just days after the U.S. launched cruise missiles against an air base in Syria, where Russia’s military is on the ground propping up its ally, President Bashar Assad. Until Thursday, the U.S. had avoided striking Assad’s forces, largely out of concern about being pulled into a military conflict with Russia.

Growing disagreements about Syria are just the latest obstacle to any plans President Donald Trump had to closer align the U.S. and Russia on the world stage. Trump and his associates are embroiled in mushrooming investigations into potential collusion between his presidential campaign and Russian President Vladimir Putin’s government, accused by America’s spy agencies of interfering in the election to help elect Trump.

Despite Trump’s much-hyped campaign talk about a Russia reset, there’s no appetite for that from either political party in the U.S. Skepticism about Russia’s intentions was only compounded by its defense of Assad after a deadly chemical attack that the U.S. says was no doubt carried out by Assad’s forces.

“The Russians really need to think carefully about their continued support of the Assad regime,” Tillerson said ahead of his trip, accusing Moscow of “great moral responsibility” for the deaths of more than 80 people.

Even minor concessions to Russia would trigger immediate accusations from Trump’s opponents that the president — who has praised Putin generously and repeatedly — is beholden to Putin, a former KBG agent. Add to that Trump’s anger at Russia for violating a nuclear arms treaty and continued global outrage over Putin’s actions in Ukraine, and it’s difficult to see realistic chances for near-term rapprochement. 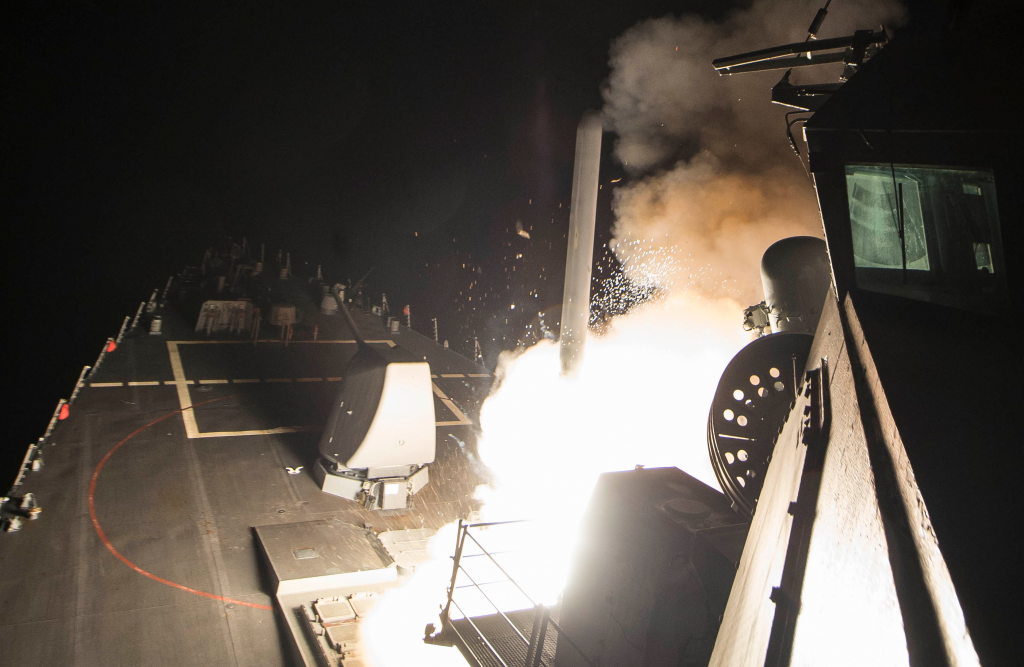 A cruise missile is launched from the deck of of the USS Ross in the Mediterranean Sea. The missile was one of around 60 that were launched to strike an airbase in Syria. U.S. Navy photo by Mass Communication Specialist 3rd Class Robert S. Price

“I think the Russians have adjusted their expectations down as to the possibilities of a breakthrough, and what happened in Syria is going to add to that,” said Michael McFaul, the U.S. ambassador to Russia under President Barack Obama. Still, he said the Russians would likely treat Tillerson warmly in hopes his trip could smooth the path toward a Trump-Putin meeting.

Tillerson arrives in Moscow on Tuesday after a brief visit to Lucca, Italy, to meet with counterparts from the Group of 7 industrialized economies. While in Russia, Tillerson plans to meet with Russian Foreign Minister Sergey Lavrov.

The State Department said Tillerson had spoken by phone to Lavrov after the chemical attack to get Russia’s take on what happened. Russia has maintained that Syrian airstrikes hit a depot where anti-Assad rebels were building chemical weapons, a claim the U.S. has vigorously disputed.

Tillerson may also meet with Putin, in what would be a reunion of sorts for two men who did business when Tillerson, the former Exxon Mobil CEO, was negotiating oil deals in Russia. Tillerson’s close ties to Russia — Putin once gave him the “Order of Friendship” award — drew serious concerns during Tillerson’s confirmation hearings, but he’s since emerged as one of the Trump administration’s more sober voices about Russia’s behavior.

Senior State Department officials described Tillerson’s visit as an “exploratory trip” aimed at determining any potential for cooperation, adding that no decisions to increase cooperation had been made. The officials briefed reporters on condition of anonymity despite Trump’s condemnations of the press for using anonymous sources.

Tillerson may or may not meet with pro-democracy activists in Russia, as members of Congress have urged, the officials said.

Relations with Russia have steadily deteriorated since 2014, when Russia annexed the Ukrainian territory of Crimea and then began arming and assisting pro-Russian separatists in eastern Ukraine. The Obama administration and Western countries slapped Moscow with severe economic sanctions that Trump has so far vowed to keep in place until Russia gives Crimea back.

Still, Putin’s government has been optimistic about Trump’s presidency. Until Tuesday’s chemical attack in Syria, Trump and his deputies said their top focus in Syria was fighting the Islamic State group — not ousting Assad — a position that aligned with Putin’s own publicly stated goal.

For Trump, who said Thursday that “something should happen” to Assad, the attack clearly was an inflection point that focused his administration on Assad’s atrocities and the support he receives from Russia, Syria’s most powerful ally.

In an Associated Press interview, Putin spokesman Dmitry Peskov said Russia’s support for Assad is not unconditional, but also pushed back on the notion that Putin had unfettered influence over Assad.

“It is not correct to say that Moscow can convince Mr. Assad to do whatever is wanted in Moscow,” Peskov said.

James Carafano, a Heritage Foundation scholar who advised Trump’s transition team on foreign policy, said the notion that Trump would have a special relationship with Putin was always overblown.

“Nobody was talking about, ‘We’re just going to cut a deal with Russia and be done here,'” Carafano said.

READ MORE: The science of surviving a chemical weapons attack

Left: Secretary of State Rex Tillerson makes a statement about the visit of China's President Xi Jinping and about the situation in Syria, at Palm Beach International Airport in West Palm Beach, Florida. Photo by Joe Skipper/Reuters