Troops lock down Kashmir as India votes to strip its status

NEW DELHI — Indian lawmakers passed a bill Tuesday that strips the statehood from the Indian-administered portion of Muslim-majority Kashmir amid an indefinite security lockdown in the disputed Himalayan territory, actions that neighboring Pakistan warned could lead to war.

Prime Minister Narendra Modi’s Hindu nationalist-led government submitted the Jammu and Kashmir Reorganization Bill for a vote by the lower house of Parliament a day after the surprise measure was introduced alongside a presidential order. That order dissolved a constitutional provision, known as Article 370, which gave Kashmiris exclusive hereditary rights and a separate constitution.

“After five years, seeing development in J&K (Jammu and Kashmir) under the leadership of PM Modi, people of the valley will understand drawbacks of Article 370,” Indian Home Minister Amit Shah said just before the bill was passed.

Kashmir is divided between India and Pakistan and both claim the region in its entirety, although each of them controls only parts of it. Two of the three wars the nuclear-armed neighbors have fought since their independence from British rule were over Kashmir.

How the 7 million people in the Kashmir Valley were reacting was unclear, because the Indian government shut off most communication with it, including internet, cellphone and landline networks. Thousands of troops were deployed to the restive region amid fears that the government’s steps could spark unrest.

Tensions also have soared along the Line of Control, the volatile, highly militarized frontier that divides Kashmir between India and Pakistan.

Hundreds of people in various parts of Pakistan and in its part of Kashmir rallied against Modi, burning him in effigy and torching Indian flags to condemn India’s moves.

Pakistan Prime Minister Imran Khan said in an address to Parliament on Tuesday night that he feared the Kashmiri people, angered over India’s decision to strip the region of its special status, could attack Indian security forces and that New Delhi could blame Pakistan for it. 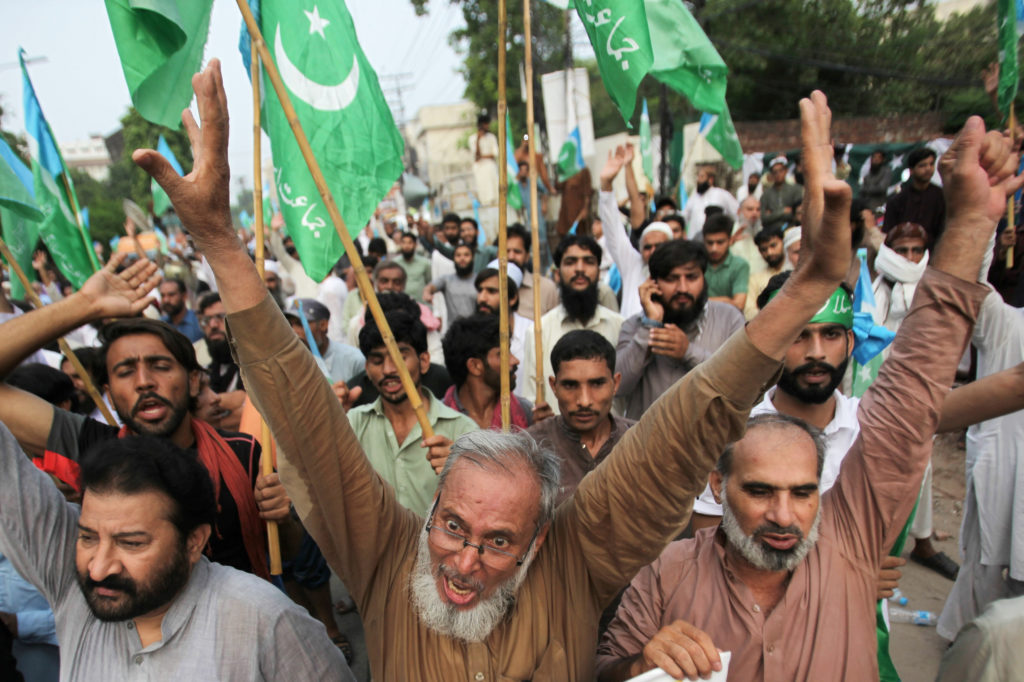 People chant slogans during a rally expressing solidarity with the people of Kashmir in Lahore, Pakistan August 6, 2019. Photo by REUTERS/Mohsin Raza

“If India attacks us, we will respond,” Khan said. “We will fight until the last drop of blood.”

In February, a bombing in Indian-controlled Kashmir killed 40 Indian troops. India responded with an airstrike inside Pakistan, blaming a Pakistani group for the attack.

On Tuesday, the Pakistani military was on high alert following reports that New Delhi was continuing to send additional troops to the region. Pakistan’s top military commanders met in the garrison city of Rawalpindi to discuss the changes in Kashmir.

China, which also lays claim to a portion of Kashmir, is “seriously concerned” about the situation, foreign ministry spokeswoman Hua Chunying said.

“China’s position on the Kashmir issue is clear and consistent. It is also an international consensus that the Kashmir issue is an issue left from the past between India and Pakistan. The relevant sides need to exercise restraint and act prudently. In particular, they should refrain from taking actions that will unilaterally change the status quo and escalate tensions,” she said.

The upper house approved the bill by a two-thirds majority, with many opposition lawmakers voting with the ruling Hindu-nationalist Bharatiya Janata Party.

“We are following with concern the tense situation in the region,” Dujarric said. “We’re also aware of reports of restrictions on the Indian side of Kashmir, and we urge all parties to exercise restraint.”

Left: An Indian army soldier patrols on a bridge during restrictions in Jammu, August 5, 2019. Photo by REUTERS/Mukesh Gupta