MOGADISHU, Somalia — A truck bomb exploded at a busy security checkpoint in Somalia’s capital Saturday morning, killing at least 78 people including many students, authorities said. It was the worst attack in Mogadishu in more than two years, and witnesses said the force of the blast reminded them of the city’s devastating 2017 bombing that killed hundreds.

The blast occurred during rush hour as Somalia returned to work after its weekend. At least 125 people were wounded, Aamin Ambulance service director Abdiqadir Abdulrahman said. A large black plume of smoke rose above the capital.

Bodies lay on the ground amid the blackened skeletons of vehicles. At a hospital, families and friends picked through dozens of the dead, gingerly lifting sheets to peer at faces. Hundreds of Mogadishu residents began to donate blood in response to desperate appeals. 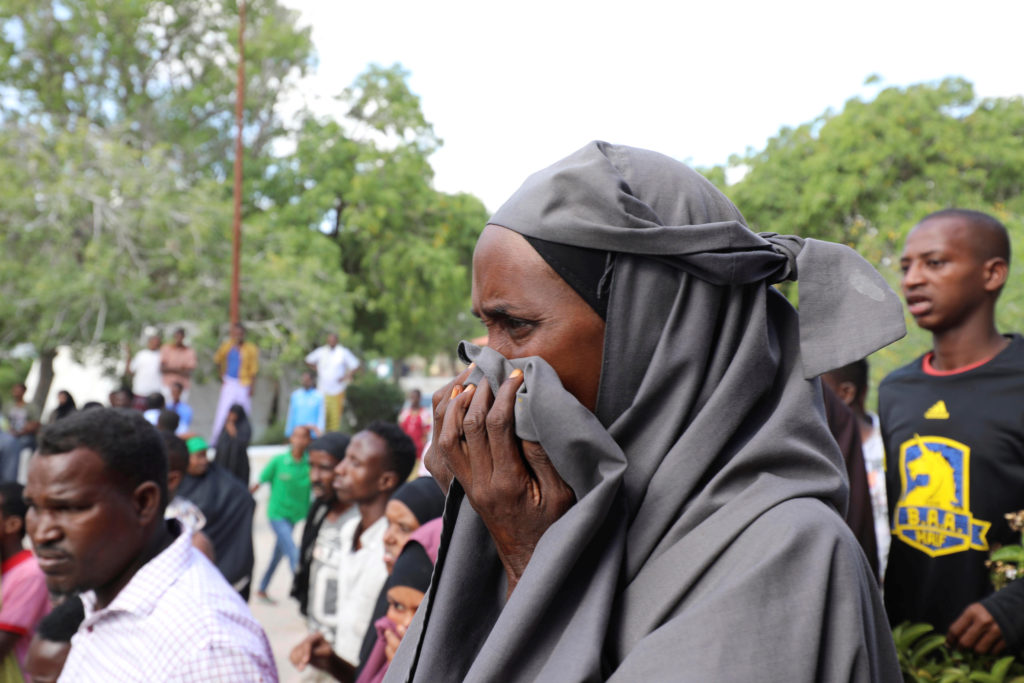 A Somali woman reacts at the scene of a December 28 car bomb explosion in Mogadishu, Somalia. Photo by Feisal Omar/Reuters

Most of those killed were university and other students returning to class, Mayor Omar Mohamud Mohamed said at the scene. Two Turkish brothers were among the dead, Somalia’s foreign minister said.

“Some of those dead were police officers, but most of them were students,” witness Mohamed Abdi Hakim said. Somalis mourned the deaths of so many young people in a country trying to rebuild itself after decades of conflict.

There was no immediate claim of responsibility but the al-Qaida-linked al-Shabab often carries out such attacks. The extremist group was pushed out of Mogadishu several years ago but continues to target high-profile areas such as checkpoints and hotels in the seaside city.

“This explosion is similar like the one … in 2017. This one occurred just a few steps away from where I am and it knocked me on the ground from its force.”

Al-Shabab is now able to make its own explosives, its “weapon of choice,” United Nations experts monitoring sanctions on Somalia said earlier this year. The group had previously relied on military-grade explosives captured during assaults on an African Union peacekeeping force.

Al-Shabab was blamed for the truck bombing in Mogadishu in October 2017 that killed more than 500 people. The group never claimed responsibility for the blast that led to widespread public outrage. Some analysts said al-Shabab didn’t dare claim credit as its strategy of trying to sway public opinion by exposing government weakness had badly backfired.

“This explosion is similar like the one … in 2017. This one occurred just a few steps away from where I am and it knocked me on the ground from its force. I have never seen such a explosion in my entire life,” witness Abdurrahman Yusuf said.

The attack again raises concern about the readiness of Somali forces to take over responsibility for the Horn of Africa country’s security in the coming months from the AU force.

Al-Shabab, the target of a growing number of U.S. airstrikes since President Donald Trump took office, controls parts of Somalia’s southern and central regions. It funds itself with a “taxation” system that experts describe as extortion of businesses and travelers that brings in millions of dollars a year.

Left: The scene of a car bomb explosion at a checkpoint in Mogadishu, Somalia, on December 28, 2019. Photo by Feisal Omar/Reuters