For Putin, the optics of not meeting Trump are bad

The whole debate about whether President Donald Trump and President Vladimir Putin were going to have a formal meeting, or what they call in summit speak a “pull aside,” is a little like a teenage conversation about whether boy X and girl Y are “going out” or just hanging out. Pull asides presumably can be just as important.

But there is an adult conversation to be had about this non-event, and that’s this: What does the absence of a substantive conversation and all its optical trappings mean for the U.S., Russia and the wider world? The answer is nothing good.

Putin likely will be offended by the non-meeting. It’s a dig. It’s one thing to show up late to a meeting — the Russian president shows up late to meetings all the time — it’s another not to show up at all. The Kremlin announced this meeting was going to happen — a big move for a cautious group of people that like to hedge their bets. President Trump said it would happen, and then it didn’t.

If Russian Foreign Minister Sergey Lavrov’s response to a state media reporter’s question about what had become of the meeting is any indication, the Russians already are fuming. “Why are you asking me? Ask the Americans. We heard Trump express the wish to meet Putin. I don’t know what the rest of his pencil-pushers are saying.”

If the optics of Trump meeting with Putin look bad for Trump, the optics of no meeting, that missing photo op in the newscast, looks just as bad for Putin. The two shaking hands positioned next to one another in the leader’s photo just doesn’t cut it.

If the optics of Trump meeting with Putin look bad for Trump, the optics of no meeting, that missing photo op in the newscast, looks just as bad for Putin.

Putin sounded uncomfortable as he stood next to President Rodrigo Duterte of the Philippines for their photo-op at the APEC Summit. Duterte, has called Putin “his hero” and praised the prowess of the weapons Russia has sold him. Putin seemed to want to dial back the jingoistic, brawny love-fest saying that the Philippines’ readiness to take on terrorism is more important than the weapons.

Not exactly a smack down, but perhaps an indication that the president of Russia isn’t entirely comfortable appearing next to people with a penchant for making sensational and disturbing claims like when Duterte claimed he stabbed someone to death as a 16-year-old. Duterte is just a chip in the geopolitical game, not a particularly popular one, and certainly not the most valuable.

In order for Russia to appear a big boy, it needs to run with the big boys. And the U.S. is the only other truly big boy in the Russians’ eyes. The Chinese come close, but they’re off in a different neighborhood. Everyone else is kind of second-tier.

Forget the idea that these two leaders couldn’t meet because of scheduling conflicts, as Trump’s press secretary suggested. In the Kremlin’s calculus, one meeting with Trump is worth 10 with Duterte. Had there been the will, they would have made the time.

So Putin will be miffed, especially after their first dance was such a hit back home. The Russian president emerged triumphant from his first “meeting” with Trump at the G-20 summit in Germany in July. Not only did they meet for more than two hours, double the scheduled time, finishing only after White House officials dispatched the first lady to unsuccessfully break up the meeting, Putin controlled the narrative.

Trump said nothing about the meeting while he was in Germany, relegating that job to Secretary of State Rex Tillerson, the Russian president held a full-fledged press conference inviting foreign journalists, including your truly, along.

I asked Putin if he felt Trump accepted his assertion that Russia had not intervened in the U.S. elections. Putin said to me, “I think he was satisfied with my answers.”

But even that doesn’t fully encapsulate the extent of that victory for Putin. Putin and Trump met not once, but twice. Trump, we learned days after the meeting, actually approached Putin at the heads of state dinner later, and the two had another informal hour-long chat with only a Russian translator present that neither side disclosed.

Meanwhile, German Chancellor Angela Merkel was photographed listening to Putin in a G-20 chat in an apparent state of disbelief, her eyes rolling back in way that seemed to say, “Vladimir, I don’t have any time for this. When are you going to tell me something I actually believe?”

Having gone from the most important man to meet and being seen with at a major event to the boy to avoid in the hallway is unlikely to leave the Russian president feeling loved. He may make his dissatisfaction known.

Having gone from the most important man to meet and being seen with at a major event to the boy to avoid in the hallway is unlikely to leave the Russian president feeling loved.

It may, in fact, be that the lack of agreement on some of these issues is why a formal meeting didn’t happen in the first place. As the White House debated to meet or not to meet, Secretary Tillerson explained the criteria for scheduling a meeting to reporters. “When the two leaders meet, is there something sufficiently substantive?” Tillerson said. “No conclusion has been made on that.”

In the run-up to this meeting, it appears Russia and the U.S. failed to get their conversations to a point where the two leaders could easily finish them off and sign the dotted line.

We know they have a wide range of issues to discuss from Ukraine to Syria to North Korea, but let’s focus on just one of those and what’s at stake.

Trump already told us he wants Putin’s help with North Korea. I’m sure Putin would be delighted to provide it — assuming his help on the Korean peninsula would mean less friction elsewhere in the Russian-American relationship. Russia’s help would be handy.

The Russians have plenty of insight and economic levers they can pull when it comes to North Korea.

The biggest lever of all might be migrant labor. Russia is home to one of the world’s largest overseas communities of North Koreans and is a close second — if not equal — to China as the biggest user of North Korean labor.

An arrangement between North Korea and Russia going back to Soviet days provides the North Korean regime with tens of millions of dollars in exchange for the cheap labor of the estimated 30,000 to 50,000 North Korean workers in Russia.

In order to work in Russia, North Korean workers have to share their earnings with the regime back home.

That’s why the State Department has labeled Russia and China the “chief principal enablers of North Korea’s nuclear weapons and ballistic missile program and … bear unique and special responsibility for this growing threat to regional and global stability.” 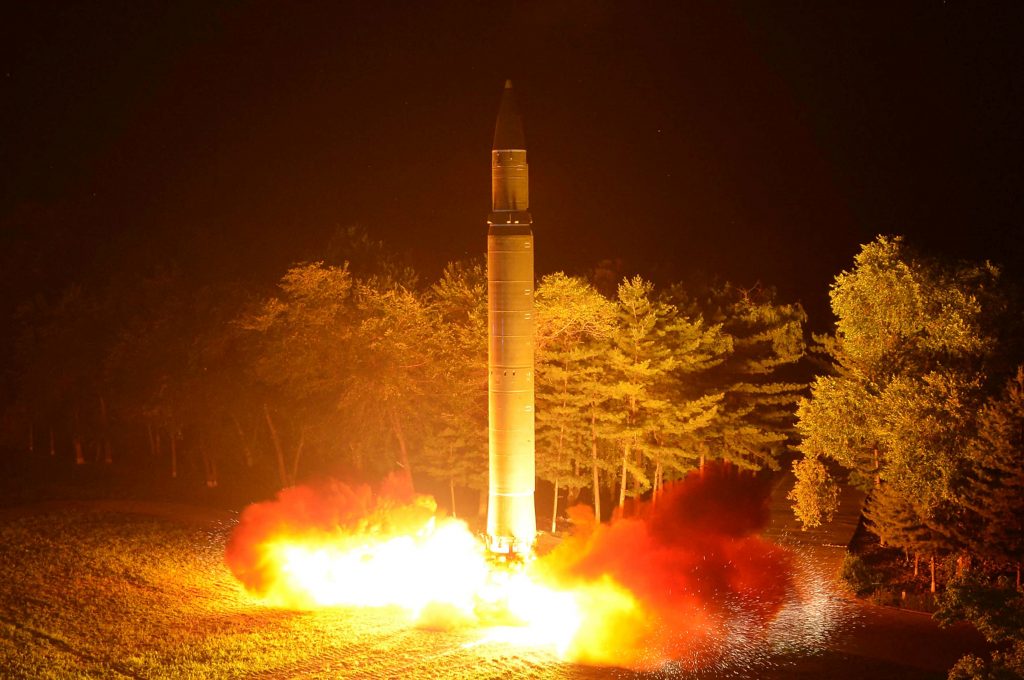 Intercontinental ballistic missile (ICBM) Hwasong-14 is pictured during its second test-fire in this undated picture provided by KCNA in Pyongyang on July 29, 2017. Photo by KCNA/ Reuters

And those aren’t the only ties Russia has with North Korea. Russia actually shares a border with North Korea along the Tumen River and on occasion provides North Korea with coal and oil via rail cars that ferry it over the Friendship Bridge. This year, even as North Korea tested its first ICBM, Russia opened the weekly Mangyongbong Ferry Service between Vladivostok and Rason, on the east coast of North Korea. And Pyongyang’s national airline, Air Koryo, runs a weekly flight between North Korea and Vladivostok, its only foreign destination outside of China.

I’ve traveled to the border and to the dormitories that house the North Korean migrants, and it’s difficult to overstate the importance of this trade to its participants. With things as dire as they are at home, Russia is a promise of prosperity.

Vladimir Putin could suspend that trade — denying Kim Jong Un’s regime that cash. That wouldn’t perhaps put as much pressure on North Korea as China can, but the Russians also have a relationship all of their own with China. If Putin, at Trump’s request, succeeds in getting the Chinese to do more, that’s still help. Isolating Putin is unlikely to encourage any of that pressure.

While it is somewhat understandable that the Trump administration wouldn’t want the president of the United States to be seen making nice with Putin, just as the flood of news on Russia’s involvement seems to be threatening to spill over, Tillerson also said the issue of Russia’s meddling in the U.S. election was on the list of items to be discussed. Many argue a meeting would have provided Trump an opportunity to press Putin on the issue. Observers’ overwhelming impression of the two leaders meeting in July was that he hadn’t done that.

While some in the Kremlin may be pleased to see their arch-rival as divided and weakened as the U.S. appears to be, frustration has been growing in Moscow that Russian-American relations are now hostage to the Trump saga and intervention in the election. There is a growing realization that Trump and Russia have become so toxic that there is little to no room for an improvement in relations between the two countries while he is in office.

The Kremlin, as a result, could of course turn their attention to further weakening Trump’s position.

This week, the Russian lawyer who attended the meeting with Donald Trump Jr. and campaign manager Paul Manafort in June 2016 told Bloomberg News the president’s son intimated that a Trump administration, if it was to come to power, would reconsider sanctions against Russia in exchange for dirt on Hilary Clinton’s campaign.

It’s an interesting and injurious allegation to be coming from Natalia Veselnitskaya. Donald Trump Jr. has denied suggesting any quid pro quo, and so far, the Kremlin has been mostly silent and supportive on the matter of their relationship with the Trump campaign in the run up to the election.

It’s hard to imagine Veselnitskaya would have made such a claim without running it by her friends in the Kremlin with so much on the line for Russia. I’ve been observing Russian politics for more than 20 years. That felt a little like a shot over the bow.

With Russia and the U.S. fighting in the same conflict in Syria and engaged in something of a proxy war in Ukraine, it’s a shame our leaders can’t sit down to find a way toward peace, especially when the two can and need to work together to prevent a much bigger war in North Korea.

Above: President Donald Trump and Russian President Vladimir Putin shake hands at the APEC summit in Danang, Vietnam on Nov. 10. Photo by Sputnik/Mikhail Klimentyev/Kremlin via Reuters