Trump scolded Germany for buying gas from Russia. Here’s what we know

BRUSSELS — President Donald Trump wasted no time in escalating his verbal attacks on Germany in the opening leg of his European tour. Seated across from NATO Secretary General Jens Stoltenberg at breakfast Wednesday morning ahead of the alliance’s meeting, Trump expanded his criticism beyond how little – in his view – Europe’s most powerful economy spends on defense to target where they buy their energy.

“Germany is totally controlled by Russia,” he said. “They will be getting between 60 and 70 percent of their energy from Russia and a new pipeline.”

But those numbers aren’t correct. Here’s what we know about the pipeline and the broader fight over natural gas exports.

What is the Nord Stream 2 Pipeline?

Trump was referring to the Nord Stream 2 Pipeline that is being built under the Baltic Sea between Russia and Germany. Gazprom, Russia’s natural gas producer, is building it alongside an existing pipeline of the same name. Several European energy companies, including Royal Dutch Shell and France’s Engie, are providing billions in funding.

But Trump’s assertion that the pipeline will provide 60 to 70 percent of Germany’s energy is incorrect. While Russia will be able to increase the amount of natural gas it sells to Germany through the pipeline, Russian gas will only provide a sliver of the overall energy Germany needs. Germany’s energy comes from a diverse mix of oil, coal and renewables. Less than one fifth of the country’s power is powered by natural gas; at the moment, just 9 percent of the country’s power is generated by Russian gas.

When Nord Stream 2 is completed, it will increase the amount of natural gas Germany gets from Russia.

That said, when Nord Stream 2 is completed, it will increase the amount of natural gas Germany gets from Russia. It will also allow Russia to send more of its gas to Germany and its European customers through Germany, therefore bypassing Ukraine, with which Russia is engaged in conflict. Ukraine has long argued Russia wants to both deprive it of badly needed income that it collects for the transit of Russian gas to the rest of Europe and also increase the continent’s dependence on Russian energy.

Trump complained Germany is “making Russia richer.” When the NATO secretary general told Trump trade was a separate matter, Trump fired back. “How can you be together when a country is getting its energy from the person you want protection against or from the group that you want protection against?” he asked. “I think it is a very bad thing for NATO and I don’t think it should have happened and I think we have to talk to Germany about it.” From Trump’s perspective, trading with adversaries is bad business.

Where else does Russia supply gas in Europe?

It’s not just the Germans who are in the words of Trump “paying the Russians billions.” Along with gas from Norway, Algeria and Qatar, Europe gets more than a third of its gas from Russia. Tens of thousands of American homes burned Russian natural gas this winter. The gas itself was produced and liquefied by a joint venture between the French energy company Total and Novatek, a company which has been subjected to U.S. financial sanctions.

The Europeans have long been concerned about an over-dependence on Russian energy and moved to diversify their sources of supply. And Trump is not the only critic of the Nord Stream 2 Pipeline. At a meeting earlier this week with Ukraine’s President Petro Poroshenko, European Council President Donald Tusk said “Nord Stream 2 is a mistake and will not best serve European interests. It is against our strategic interests, our security, and also our rules.”

It’s important to point out that German Chancellor Angela Merkel has herself called for the construction of terminals that would enable Germany to take in liquefied natural gas from other countries, including the United States. And, this March, standing alongside Poroshenko, she acknowledged the politics surrounding Nord Stream 2 and that Germany would demand Russia outline how it plans to use the existing pipelines in Ukraine after Nord Stream 2’s completion. Prior to that, she had maintained the Nord Stream 2 pipeline was a purely “economical project.” 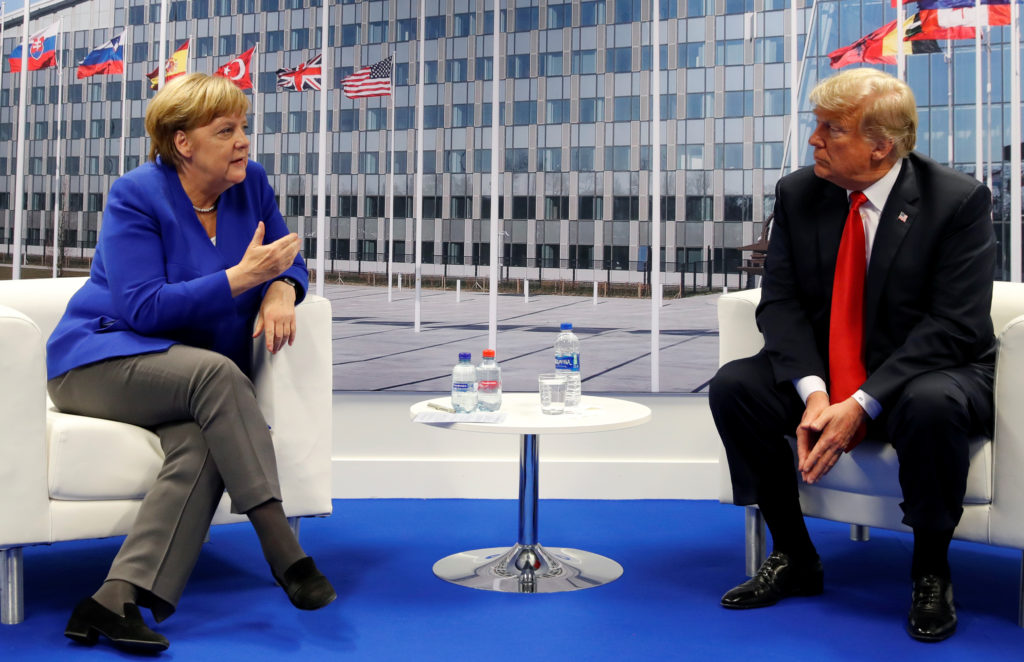 What Trump didn’t say Wednesday is where he thinks Germany should get its gas. But he has made his stance on the issue known, to Germany and other world leaders. On the world stage, Trump has become the U.S. natural gas industry’s salesman-in-chief, telling a steady stream of foreign leaders from Indian Prime Minister Narendra Modi to South Korean President Moon Jae-in that they should buy their gas from the U.S. Last year, on a visit to Poland, Trump vowed to raise U.S. natural gas exports to Europe.

U.S. energy producers would love to export natural gas to Europe. The U.S. is awash in gas. The so-called “shale revolution” — the combination of American innovation and technology that has enabled producers to get at previously inaccessible oil and gas — has transformed the U.S. from a country unable to cover its own energy needs to one that on occasion can even export.

Until recently, U.S. energy exports were largely of oil. But the emergence and spread of technology and infrastructure that allow companies to cool gas into a liquid, put it on a ship, and turn it back into gas when it reaches its port of call means the U.S. can now export its gas, too.

The upside for American companies: There’s so much natural gas in the U.S., it’s cheap. The problem: It’s not so cheap by the time it’s gone through all those other steps and moved across the Atlantic.

The upside for American companies: There’s so much natural gas in the U.S., it’s cheap. The problem: It’s not so cheap by the time it’s gone through all those other steps and moved across the Atlantic. The most promising market for U.S. liquified natural gas exports is actually Asia and more specifically, China, a country on which the Trump administration has just slapped tariffs.

For that reason, Russian gas is cheaper than American gas in Europe. With a network of pipelines already in place –- and more to come — Russia can simply pipe its gas to its European clientele. Russia is the world’s largest gas exporter. Europe can simply not live without Russian gas, especially as some existing sources — particularly in the Netherlands — are on the decline. The only question is through which pipelines Western Europe is going to get its gas from their eastern neighbor. The Russians know this. The Europeans know this. And surely the Trump administration knows this.

This summer, a Russian energy official detailed an emerging concern among Kremlin officials. He’d just come from the annual Munich Security Conference, which is ostensibly focused on matters of defense and security. The Russians have long been accused of wielding their natural gas as a weapon, the stick in a “carrot and stick” approach, and yet the Russian official complained to me that America is also taking just that approach.

“A U.S. official at the conference was telling the Europeans American natural gas is ‘freedom gas’ and to buy it to free themselves of Russian influence. The Americans want Europe to buy American gas even though it’s much more expensive. They want Europe to pay ‘protection money.'”

There is a lack of consistency in Trump’s view on energy and allies. Just a short while ago, Trump officials asked Russia (and Saudi Arabia) to produce and sell more oil to help bring down global prices.

Russian President Vladimir Putin will find things to like in Trump’s comments. His comments buttress the argument that Russia and the U.S. make up a bipolar world (of course, this leaves out the world’s second-largest economic power: China).

Putin and Trump are scheduled to meet early next week. With Trump having referred to Putin’s Russia as a “competitor” ahead of this trip, and now accusing Germany of “being a captive of Russia,” he’s reinforcing the idea that Russia and America are again in an apparent showdown, setting the stage for more drama (and good TV) not just in the U.S. but Russia as well.

Left: A man walks by a stack of North Stream 2 pipes in Kotka, Finland on June 8, 2017. Photo by Axel Schmidt/Reuters