The Islamic State group are being held responsible for a suicide blast that hit Istanbul’s main tourist district Tuesday, killing at least 10 people, not including the bomber, and wounding another 15, Turkey’s prime minister said.

The suicide bomber was a “foreign national” with connections to the militant group, Turkish Prime Minister Ahmet Davutoglu said, adding that he vowed to fight IS until it no longer “remain a threat” to Turkey. Last year, Turkey joined the U.S.-coalition against the extremists after some initial hesitancy. 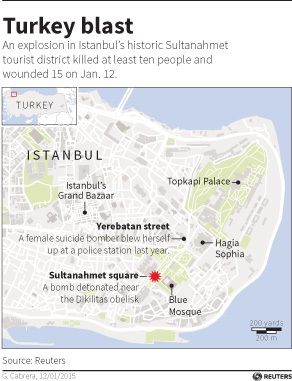 Of those killed in Tuesday’s attack, at least nine were German tourists. Many of those wounded are German as well. Turkish media reported that the prime minister called German Chancellor Angela Merkel to offer his condolences.

U.S. National Security Council spokesman Ned Price issued a statement condemning the act, reading in part, “This heinous attack occurred in Istanbul’s historic heart, and struck Turks and foreign tourists alike.  Our thoughts and prayers are with the families and loved ones of all those who have been killed and with those injured.”

Turkish officials have pointed to the Islamic State group for two bombings in the country in the past year, including the twin bomb blasts in Ankara that killed more than 100 people during a peaceful rally in October. The Ankara bombings are the worst terrorist attacks in Turkey’s modern history.

Left: Emergency services attend the scene after an explosion near the Blue Mosque in Istanbul, Turkey on Jan. 12. Ten people were killed and 15 were wounded after a suicide bombing rocked a historic square in Istanbul on Tuesday. Photo by Osman Orsal/Reuters