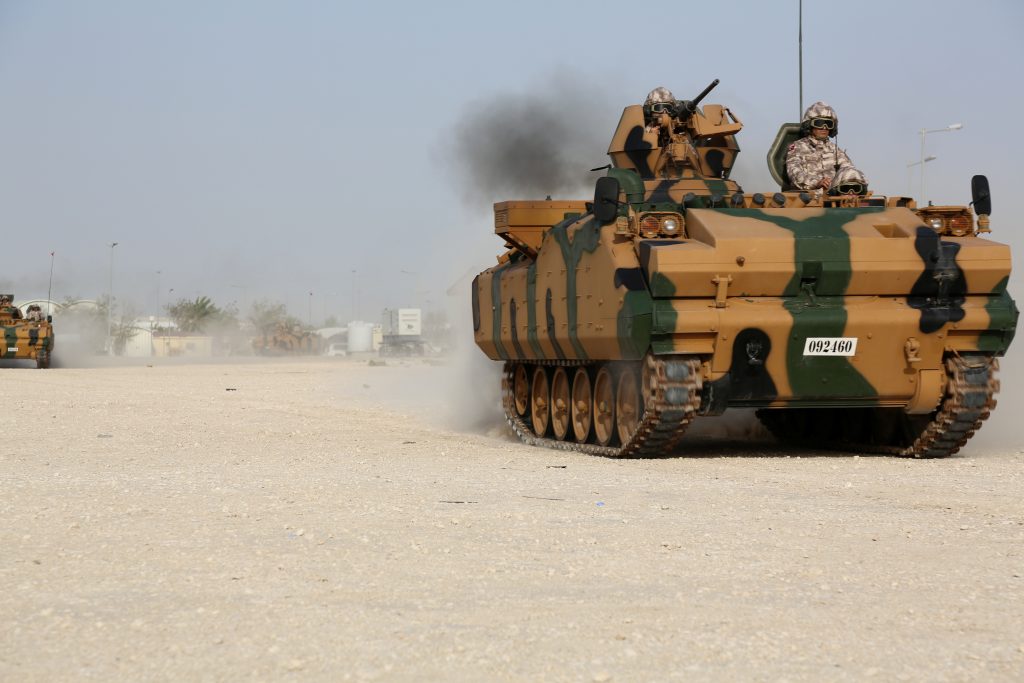 DUBAI, United Arab Emirates — Turkey on Friday rejected a key demand by several Arab states involved in a major dispute with Qatar, saying Ankara has no plans to shut down its military base in the small Gulf country.

The demand that Turkey pull out its forces was one of a steep list of ultimatums from Saudi Arabia and others Qatari neighbors that includes shuttering broadcaster Al-Jazeera, curbing back diplomatic relations with Iran and severing all ties with the Muslim Brotherhood. The Associated Press obtained a copy of the 13-point list in Arabic from one of the countries involved in the dispute.

Qatar has confirmed receiving the list Thursday from Kuwait, which is mediating the dispute, but has not yet commented on them.

Rather than focus narrowly on alleged Qatari financing for extremism, the 13-point catalog of demands illustrates the sweeping change in direction that Qatar’s neighbors are insisting the tiny, gas-rich nation must undertake to align itself with Saudi Arabia’s broader vision for the region. Though Qatar is likely to reject it, the list answers the growing call from the United States and from Qatar for the countries to put their grievances in writing.

WATCH: What’s behind the dramatic diplomatic rift with Qatar?

Saudi Arabia, Egypt, the United Arab Emirates and Bahrain broke ties with Qatar and restricted access to land, sea and air routes earlier this month over allegations it funds terrorism — an accusation Doha rejects but that President Donald Trump has echoed. The move has left Qatar, whose only land border is shared with Saudi Arabia, under a de facto blockade by its neighbors.

Turkish Defense Minister Fikri Isik said on Friday that the Turkish base aims to train Qatari soldiers and increase the tiny Persian Gulf nation’s security. According to the Milliyet newspaper’s online edition, he also said that “no one should be disturbed by” the Turkish presence in Qatar.

Turkey has sided with Qatar in the dispute and its parliament has ratified legislation allowing the deployment of Turkish troops to the base. The military said a contingent of 23 soldiers reached Doha on Thursday.

Qatar has insisted its neighbors are trying to force it to bend to their will on a much broader set of issues, and as the crisis has dragged on, the U.S. has started publicly questioning whether ulterior motives are involved.

Qatar has insisted its neighbors are trying to force it to bend to their will on a much broader set of issues, and as the crisis has dragged on, the U.S. has started publicly questioning whether ulterior motives are involved.

Earlier this week, Secretary of State Rex Tillerson warned the demands must be “reasonable and actionable.” The U.S. issued that litmus test amid frustration at how long it was taking Saudi Arabia and others to formalize a list of demands, complicating U.S. efforts to bring about a resolution to the worst Gulf diplomatic crisis in years.

Qatar vehemently denies funding or supporting extremism. But the country acknowledges that it allows members of some extremist groups such as Hamas to reside in Qatar, arguing that fostering dialogue with those groups is key to resolving global conflicts.

Underscoring the growing seriousness of the crisis, state-run Qatar Petroleum acknowledged early Friday that some critically important employees “may have been asked to postpone” trips abroad “for operational reasons” as a result of the embargo.

It described the move as “a very limited measure that could take place in any oil and gas operating company” to ensure uninterrupted energy supplies to customers.

Under Qatari law, foreigners working in the country must secure their employer’s consent to receive an exit permit allowing them to leave. The practice, which has been in place for years, has been assailed by rights groups who say it limits workers’ freedom of movement and leaves them open to abuse.

Qatari officials in Doha did not immediately respond to a request for comment from the AP. But the list included conditions that the gas-rich nation had already insisted would never be met, including shutting down Al-Jazeera. The network also had no immediate comment.

“At the moment, there is no likelihood of bringing the matter back to the table,” said Isik, the Turkish defense minister.

Qatar’s neighbors are also demanding that it hand over all individuals who are wanted by those four countries for terrorism; stop funding any extremist entities that are designated as terrorist groups by the U.S.; and provide detailed information about opposition figures that Qatar has funded, ostensibly in Saudi Arabia and the other nations.

Qatar’s neighbors have also accused it of backing al-Qaida and the Islamic State group’s ideology throughout the Middle East. Those umbrella groups also appear on the list of entities whose ties with Qatar must be extinguished, along with Lebanon’s Hezbollah and the al-Qaida branch in Syria, once known as the Nusra Front.

More broadly, the list demands that Qatar align itself politically, economically and otherwise with the Gulf Cooperation Council, a regional club that has focused on countering the influence of Iran. Saudi Arabia and other Sunni-led nations have accused Qatar of inappropriately close ties to Iran, a Shiite-led country and Saudi Arabia’s regional foe.

The Iran provisions in the document say Qatar must shut down diplomatic posts in Iran, kick out from Qatar any members of Iran’s elite Revolutionary Guard, and only conduct trade and commerce with Iran that complies with U.S. and international sanctions. Under the 2015 nuclear deal, nuclear-related sanctions on Iran were eased but other sanctions remain in place.

The Revolutionary Guard has deployed its forces to conflict zones such as Syria and Iraq. It is not known to have a presence in Qatar.

Cutting ties to Iran would prove incredibly difficult. Qatar shares a massive offshore natural gas field with Iran which supplies the small nation that will host the 2022 FIFA World Cup its wealth.

Also, not only must Qatar shut down the Doha-based satellite broadcaster, the list says, but also all of its affiliates. That presumably would mean Qatar would have to close down Al-Jazeera’s English-language sister network.

Supported by Qatar’s government, Al-Jazeera is one of the most widely watched Arabic channels, but it has long drawn the ire of Mideast governments for airing alternative viewpoints. The network’s critics say it advances Qatar’s goals by promoting Islamist movements like the Muslim Brotherhood that pose a populist threat to rulers in other Arab countries.

The list also demands that Qatar stop funding a host of other news outlets including Arabi21, Al-Araby Al-Jadeed and Middle East Eye.

If Qatar agrees to comply, the list asserts that it will be audited once a month for the first year, and then once per quarter in the second year after it takes effect. For the following 10 years, Qatar would be monitored annually for compliance.