Early in the morning on Sept. 16, 1810, priest Miguel Hidalgo y Costilla rang the bell of his church in the small town of Dolores, near Guanajuato, Mexico. His parishioners gathered round, and he urged them to revolt against Spain’s two-year-old Napoleonic government.

Hidalgo’s call to arms, which later became known later as the Grito de Dolores (Cry of Dolores), triggered the Mexican War of Independence. Every September 15, the president of Mexico takes to the balcony of the National Palace in Mexico City to reenact it.

This year, just a week before Independence Day, a historic earthquake struck Mexico’s southern coast, killing nearly 100 people. So President Enrique Peña Nieto added a poignant element to his Grito by including in the incantation a reference to the impoverished states that were most devastated by the quake, crying “Long live the solidarity of Mexicans with Chiapas and Oaxaca!”

It was a nice twist on tradition, but these two states will need more than expressions of solidarity to recover. The 8.2 magnitude quake is the strongest Mexico has experienced in 100 years, surpassing even the Sept. 19, 1985 earthquake that killed up to 40,000 people in and around Mexico City, according to the highest estimates.

It was also significantly more powerful than the recent 7.1 magnitude earthquake that killed upwards of 200 people in and around Mexico’s capital on September 19. 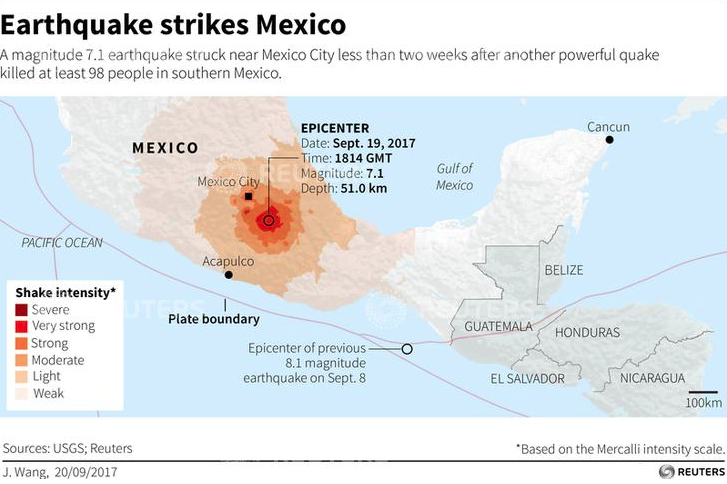 This latest quake shook Mexico City 32 years to the day after the 1985 “big one.” I was 11 years old when the quake hit, and I recall the government of President Miguel de la Madrid reacting with what can only be described as criminal apathy: In the first days after the disaster, he prevented the army from rescuing victims and rejected international aid.

The people of Mexico City, however, took to the streets, distributing food, water and blankets among those who needed them and digging neighbors free from the rubble with their bare hands.

This time around, the death toll is significantly lower than it was in 1985: 78 fatalities in Oaxaca, 16 in Chiapas and four in Tabasco for the first earthquake, and more than 220 for the second. In part, this reflects improvements in building regulations since 1985 and the creation of both a Mexican Seismic Alert System and a National Civil Protection System.

Still, the damages are daunting. Scores of buildings in Mexico City have suffered catastrophic damage.

But it was Oaxaca and Chiapas – Mexico’s two poorest states – that took the harshest blow. More than 2,500 schools have been severely harmed and 85,000 houses have been affected – more than 17,000 of them beyond repair.

Poverty makes these disaster impacts worse in the south. On average, 46 percent of Mexican households live in poverty. But 70 percent of Oaxaca’s population earns less than what’s needed to satisfy basic family needs, according to the government’s CONEVAL agency, and 77 percent of Chiapas households do. 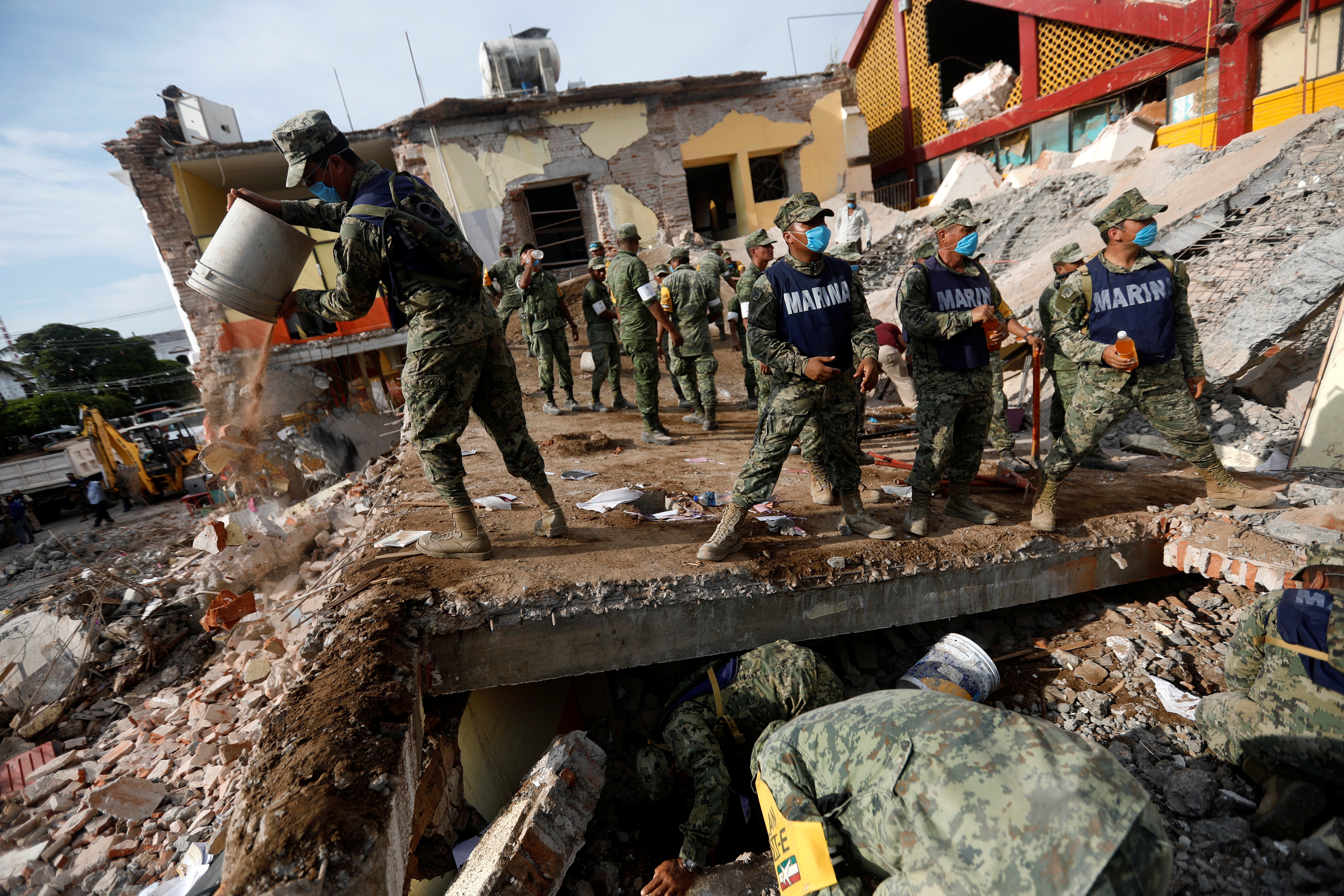 Soldiers remove the debris of a house destroyed in an earthquake that struck off the southern coast of Mexico late on Thursday, in Juchitan, Mexico, September 8, 2017. Photo by Edgard Garrido/Reuters

The World Bank lists Mexico as the 15th most powerful economy in the world, but its wealth has not trickled down to the southern states.

That fact has left many on the ground wondering whether the 16 billion Mexican pesos ($901 million) in federal disaster assistance being offered to 283 municipalities in Oaxaca and 97 in Chiapas will get to where it needs to go.

Unequal development in Mexico is an ongoing challenge. A recent report from the Bank of Mexico showed that during the second trimester of 2017, the Mexican economy grew in north (0.9 percent), center-north (1.2 percent) and central zones (0.7 percent), home to such powerhouse cities as Monterrey, Guadalajara and Mexico City, but contracted over 1 percent in the rural south.

If there’s a silver lining to these twin earthquakes, it’s that the post-disaster recovery analyses have finally shed some light on the historical neglect of Chiapas and Oaxaca, together home to around nine million Mexicans.

What the earthquake unearthed

It is not incidental that many of those residents are of indigenous descent. Upwards of 40 percent of Mexico’s indigenous peoples live in the southern states of Oaxaca, Chiapas and Yucatán.

Their economic exclusion dates back to the colonial era. In 1813, a Chiapas priest, Mariano Robles Domínguez de Mazariegos, testified in Spain to the “violent humiliations” suffered by the indigenous inhabitants of Chiapas, who, he said, lived a life of “agitation and continuous terror and distress” because they were treated with such “contempt and hatred.”

More than 200 years later, on New Year’s Day 1994, the Zapatistas, whose ranks consist of largely of poor Mayans from Chiapas, used similar words to justify an indigenous rebellion against the North American Free Trade Agreement (NAFTA), which had just been signed.

Condemning NAFTA as a death sentence for traditional agricultural methods still practiced on collectively owned indigenous lands, the First Declaration of the Lacandona Jungle asserted that Chiapas’ rural population had “nothing”: “no land, no work, no health care, no food nor education” – not even a roof over their heads.

As the recent earthquake reveals, the plight of indigenous Mexicans has not improved markedly over the past 200 years. Their homes offered tenuous shelter from the quake at at best, and their food supplies, long delicate, are now running short.

The worst and the best of Mexico

Mexico is and always will be a land of earthquakes. Pre-Columbian records report seismic activity attributed to the wrath of gods said to be unhappy about the state of human affairs.

It’s not clear that Peña Nieto, whose government is dogged by scandals and wildly public corruption, can make use of this crisis to bring social change to Oaxaca and Chiapas.

Other politicians are falling short of this high bar, too. In a Facebook video, the wife of Chiapas Governor Manuel Velasco, a member of Peña Nieto’s inner circle, toured a ruined Chiapas home to show the administration “is helping” but lamented her “tousled” hair.

The populace, at least, is coming to its own assistance. Right after the quake in Mexico City, people formed veritable factory lines of diggers to excavate their buried neighbors and lent out bicycles so stranded colleagues could make their way home.

Residents of Mexico’s southern region have also showed the country what resilience looks like, even in the face of overwhelming historic odds. In the town of Juchitán, Oaxaca, where the historic town hall pancaked after the earthquake, a man picked up a Mexican flag that had previously decorated its facade, shook off the dust and then, in an act that touched millions, he placed it atop the debris.

Luis Gómez Romero is a Senior Lecturer in Human Rights, Constitutional Law and Legal Theory at the University of Wollongong. This article was originally published on The Conversation. Read the original article.

Left: Soldiers remove the debris of a house destroyed in an earthquake that struck off the southern coast of Mexico late on Thursday, in Juchitan, Mexico, on Sept. 8, 2017. Photo by Edgard Garrido/Reuters