Typhoon Haiyan hits the Philippines with near-200 mph winds 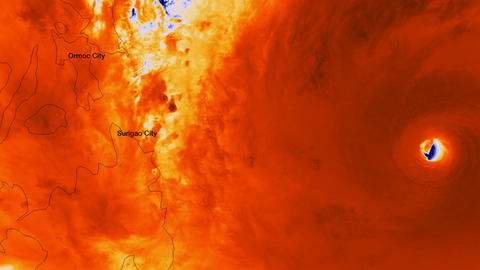 Updated 5:30 p.m. ET | Typhoon Haiyan made landfall with the Philippines early Friday local time. The AP reports it is poised to be the “strongest tropical cyclone ever recorded at landfall,” with wind damage expected to be the most extreme in the history of the country.

One of the strongest storms ever recorded is closing in on the Philippines.

Typhoon Haiyan is due to hit the eastern coast of the country Friday. The super storm has hit the maximum strength of 8.0 on the Dvorak scale with reports from the Joint Typhoon Warning Center of sustained 190 mph winds and also threatens to bring with it a storm surge of around 10 feet, easily threatening catastrophic damage to the country. Philippines authorities have ordered evacuations and thousands have fled the central villages ahead of the typhoon.

NOAA has provided an animation of the storm in the Pacific: