MANILA, Philippines — In a military buildup certain to inflame tensions with China, the United States said Thursday it will send troops and combat aircraft to the Philippines for regular, more frequent rotations, and will conduct more joint sea and air patrols with Philippine forces in the South China Sea.

The announcement by U.S. Defense Secretary Ash Carter in a news conference with Philippine Defense Secretary Voltaire Gazmin was the first time the U.S. disclosed that its ships had carried out sea patrols with the Philippines in the South China Sea, a somewhat rare move not done with many other partners in the region.

Carter insisted that the U.S. did not intend to be provocative and was “trying to tamp down tensions here.” But Gazmin said he expected that U.S. forces, “with their presence here, will deter uncalled-for actions by the Chinese.”

The increased troop presence is part of a broader U.S. campaign to expand its assistance to the Philippines as America shores up its allies in the Asia-Pacific that are roiled by China’s building of man-made islands in the South China Sea. While the military boost does not include permanent basing for U.S. troops, China views any increased U.S. military presence and activities in the region as a threat.

“Military exchanges by relevant countries should not target third parties, much less support a few countries in challenging China’s sovereignty and security, inciting regional contradictions and sabotaging regional peace and stability,” the Chinese Foreign Ministry said in a statement in response to Carter’s announcement.

Carter said the U.S. will keep nearly 300 troops, including Air Force special operations forces armed with combat aircraft and helicopters, in the Philippines through the end of the month. The U.S. will increase troop rotations to strengthen training and support increased military operations in the region.

Speaking in the guest house of the presidential complex, Carter said the joint patrols will improve the Philippine navy and “contribute to the safety and security of the region’s waters.” Two patrols have taken place since March. The U.S. also has conducted joint patrols with Japan in the region.

Carter has said that China’s increased aggression in the region is compelling more countries to reach out to the U.S., strengthening their military ties with Washington.

The increase in military support comes days after the Philippines’ ambassador to the U.S. asked the Obama administration to help persuade China not to build in the nearby Scarborough Shoal, which is viewed as important to Philippine fishermen. Ambassador Jose Cuisia Jr. said the Philippines cannot stop China from building there. China has built man-made islands in other contested spots in the South China Sea. 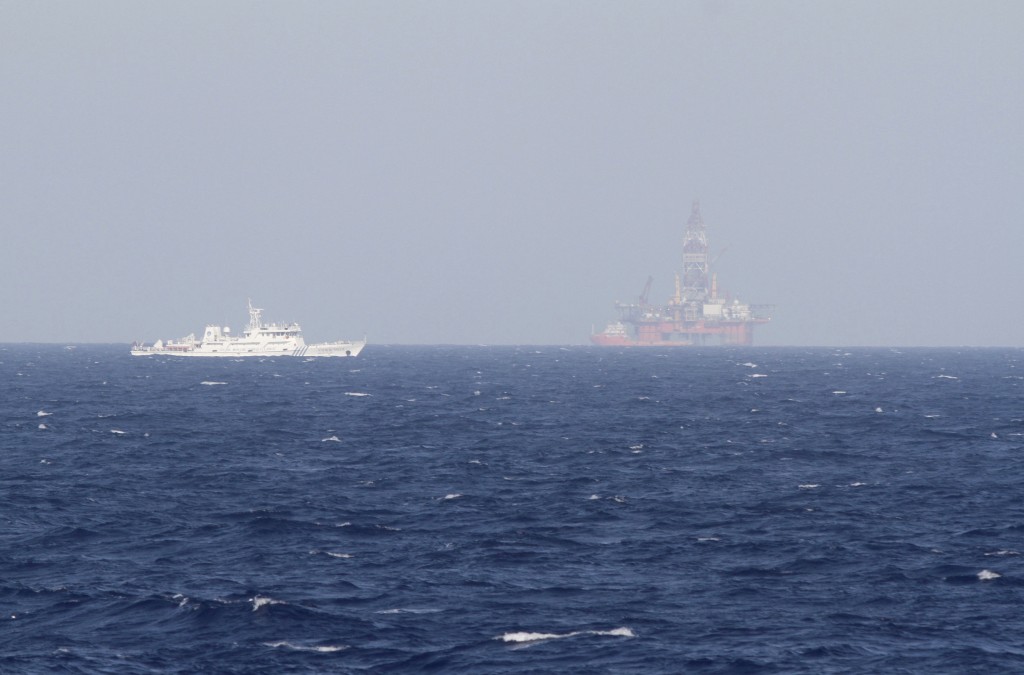 An oil rig (R) which China calls Haiyang Shiyou 981, and Vietnam refers to as Hai Duong 981, is seen in the South China Sea, off the shore of Vietnam in this May 14, 2014 file photo. Vietnam demanded China move a controversial oil rig on April 7, 2016 and abandon plans to start drilling in waters where jurisdiction is unclear, the latest sign of festering unease among the two communist neighbors. Photo by Minh Nguyen/Files TPX/Reuters

Charlito Maniago, the leader of a northwestern Philippine village where many fishermen lost access to the disputed Scarborough Shoal after China seized it in 2012, said the joint patrols will bring hope that fishermen can again sail freely to the rich fishing ground.

“This will boost the confidence of our fishermen because they think the U.S. has the capability to defend them,” Maniago told The Associated Press by telephone from the coastal village of Cato in Pangasinan province. “The presence of America will make China think twice.”

The Pentagon said the U.S. forces that will remain in the Philippines are already participating in the Balikatan, or shoulder-to-shoulder combat exercises, that will end Friday. About 200 airmen, including special operations forces, will remain at Clark Air Base, along with three of their Pave Hawk attack helicopters, an MC-130H Combat Talon II special mission aircraft and five A-10 combat aircraft.

This initial contingent will provide training to increase the two militaries’ ability to work together, laying the groundwork for forces to perform joint air patrols.

Up to 75 Marines will stay at Camp Aguinaldo to support increased U.S. and Philippine combined military operations.

The troops and aircraft are expected to leave at the end of April, but other U.S. forces and aircraft would do similar rotations into the Philippines routinely in the future. Carter would not say how frequently those rotations would happen, but called it a “regular periodic presence.”

Last week the Pentagon announced that the U.S. will give the Philippines about $40 million in military assistance to bolster intelligence-sharing, surveillance and naval patrols. Carter said the aid will include an enhanced information network for classified communications, sensors for patrol vessels and an unmanned aerostat reconnaissance airship to help the Philippines keep watch over its territory.

The U.S. will get access to five Philippine military bases to house American forces that will rotate in and out of the country for training and other missions.

Scarborough Shoal is at the center of a case that Manila filed with the Permanent Court of Arbitration, an international panel, in January 2013 after Chinese coast guard ships took effective control of the disputed land following a tense standoff with Filipino ships.

The court has agreed to take the case. Beijing says the panel has no jurisdiction in the matter.

Associated Press writers Jim Gomez in Manila and Christopher Bodeen in Beijing contributed to this report.

Left: Filipino soldiers gesture at a Chinese Coast Guard vessel on the disputed Second Thomas Shoal, part of the Spratly Islands, in the South China Sea in 2014. Photo by Erik De Castro/Reuters