U.S. cuts aid to Palestinians by more than $200 million

WASHINGTON — The Trump administration has decided to cut more than $200 million in bilateral aid to the Palestinians, following a review of the funding for projects in the West Bank and Gaza, the State Department said Friday.

The department notified Congress of the decision in a brief, three-paragraph notice sent first to lawmakers and then to reporters. It said the administration will redirect the money to “high priority projects elsewhere.”

The move comes as President Donald Trump and his Middle East pointmen, Jared Kushner and Jason Greenblatt, staff up their office to prepare for the rollout of a much-vaunted but as yet unclear peace plan for Israel and the Palestinians.

“At the direction of President Trump, we have undertaken a review of U.S. assistance to the Palestinian Authority and in the West Bank and Gaza to ensure these funds are spent in accordance with U.S. national interests and provide value to the U.S. taxpayer,” the department said. “As a result of that review, at the direction of the president, we will redirect more than $200 million … originally planned for programs in the West Bank and Gaza.”

“This decision takes into account the challenges the international community faces in providing assistance in Gaza, where Hamas control endangers the lives of Gaza’s citizens and degrades an already dire humanitarian and economic situation,” the notice said, without providing additional details.

One main issue the U.S. has had with support for the Palestinian Authority had been its stipends paid to the families of Palestinians killed, injured or jailed for attacks on Israel. Israel and the Trump administration, have repeatedly demanded that those payments from a so-called “martyrs’ fund” be halted because they encourage terrorism. Palestinian President Mahmoud Abbas has refused to do so.

The Palestine Liberation Organization quickly denounced the decision, calling it “the use of cheap blackmail as a political tool. The Palestinian people and leadership will not be intimidated and will not succumb to coercion.”

“The rights of the Palestinian people are not for sale,” PLO Executive Committee member Hanan Ashrawi said in a statement. “There is no glory in constantly bullying and punishing a people under occupation. The U.S. administration has already demonstrated meanness of spirit in its collusion with the Israeli occupation and its theft of land and resources; now it is exercising economic meanness by punishing the Palestinian victims of this occupation.”

READ NEXT: As aid dries up, Gaza families pushed deeper into poverty

The notice did not give an exact amount of the funds to be cut, but said they had been approved in 2017 as part of a $230.1 million package in economic support funds for the Palestinians.

One official said the specific amount had not yet been determined because $25 million in planned 2017 funding for the East Jerusalem Hospital Network, which provides health care to Palestinians, remains on hold and under review. All or part of that could still be released or reprogrammed, the official said.

The U.S. had planned to give the Palestinians $251 million for good governance, health, education and funding for civil society in the current 2018 budget year that ends on Sept.30. But with just over a month to go before that money must be used, reprogrammed to other areas or returned to Treasury, less than half has actually been spent. 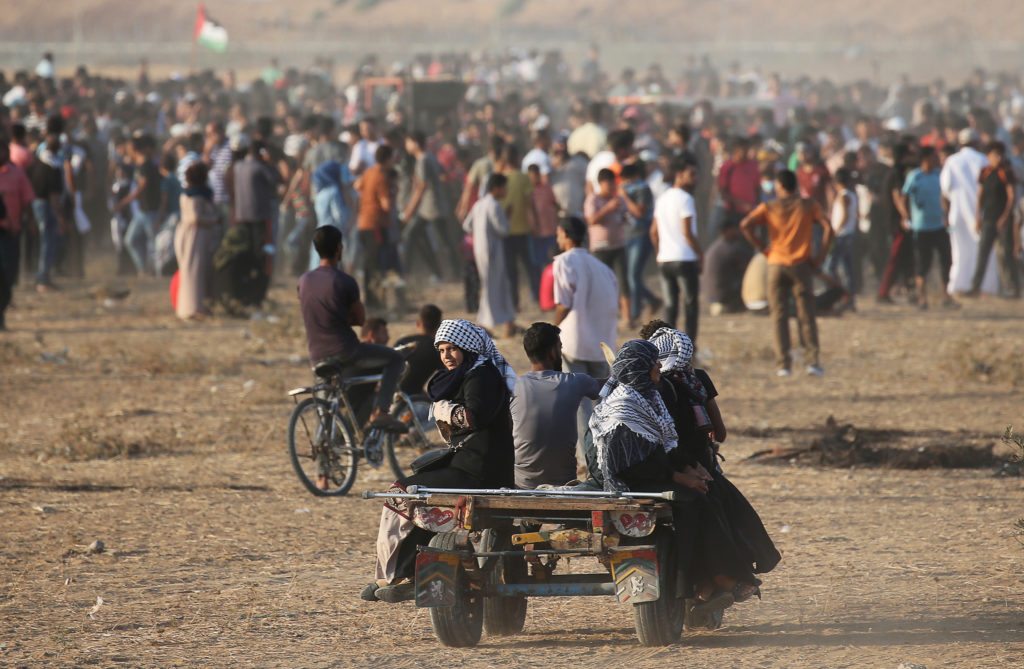 Palestinian women ride on a donkey-drawn cart during a protest demanding the right to return to their homeland at the border fence between Israel and Gaza, in the southern Gaza Strip August 24, 2018. Photo By Ibraheem Abu Mustafa/Reuters

Earlier this month, the department had released about $60 million of the 2018 money for security projects that encourage cooperation between the Palestinian Authority and Israel. Israel and Jordan, in particular, had lobbied for the security assistance to be continued.

The loss of the assistance is almost certain to further provoke the Palestinians against the Trump peace plan. The Palestinian leadership has been openly hostile to any proposal from the administration, citing what it says is a pro-Israel bias, notably after Trump recognized Jerusalem as Israel’s capital in December and moved the U.S. embassy there from Tel Aviv in May. The Palestinian Authority and Abbas broke off contact with the U.S. after the Jerusalem announcement.

The announcement does not include some $65 million in frozen U.S. funding for the U.N. Relief and Works Agency, which provides services to Palestinians in the West Bank, Gaza, Jordan and Lebanon. However, the Trump administration is extremely skeptical of UNRWA and that money is also likely to be reprogrammed, according to officials.

Friday’s decision follows a similar decision last week in which the State Department announced that it was redirecting $230 million dollars in aid that had been planned for stabilization programs in liberated areas of Syria. In that case, however, the department said the loss of U.S. funding would be more than offset by other nations, including Saudi Arabia, which announced a $150 million contribution for Syria stabilization just hours before the American announcement.