WASHINGTON — A brazen attack that the Taliban says targeted the top U.S. commander in Afghanistan is a stark reminder of the formidable task the Trump administration faces as it tries to extricate America from its longest war.

The commander, Army Gen. Scott Miller, escaped unharmed from Thursday’s attack. Elections for the lower house of parliament are still expected to be held as scheduled Saturday in much of the country. And administration officials said U.S. resolve is unshaken.

“We remain absolutely committed to an Afghan-led Afghan reconciliation,” Defense Secretary Jim Mattis told reporters Friday on the sidelines of an Asian security conference in Singapore. “Right now, we’re going toward the election and we will continue to defend the Afghan people.”

Violence is rising, claiming the lives of hundreds of civilians every month. There have been seven U.S. combat deaths so far this year.

But the timing of the attack makes U.S. goals seem ever more distant. It comes just a week after reported U.S. back-channel talks with the Taliban and as the administration steps up efforts to kick-start peace negotiations between the militant group and the Afghan government to end the war, now entering its 18th year.

“The Trump administration, like the Obama administration before it, wants out. The Taliban knows this and is more than happy to dictate the terms of America’s withdrawal,” Thomas Joscelyn, a senior fellow at the Washington-based Foundation for Defense of Democracies, wrote in The Weekly Standard, a conservative magazine.

There are about 14,000 U.S. troops in Afghanistan on a mission to train and assist Afghan government forces in taking the fight to the Taliban, which controls or contests close to half the districts in the country. Violence is rising, claiming the lives of hundreds of civilians every month. There have been seven U.S. combat deaths so far this year.

U.S. Army Col. David Butler, who was near where the shooting occurred after Miller met Afghan officials, disputed the Taliban and said the target was Kandahar police chief Abdul Raziq, one of the three officials killed. But even their claim that they were going after Miller cast doubt on whether the militants are indeed willing to negotiate.

“The U.S. government has never been more invested in pursuing peace talks, and even an attack on the top U.S. commander in Afghanistan is unlikely to deter Washington in that goal,” said Michael Kugelman, senior associate for South Asia at the Wilson Center. “But the attack amplifies how the Taliban will test the extent of America’s willingness to pursue talks, and how the Taliban may up its violence in order to strengthen its bargaining position.” 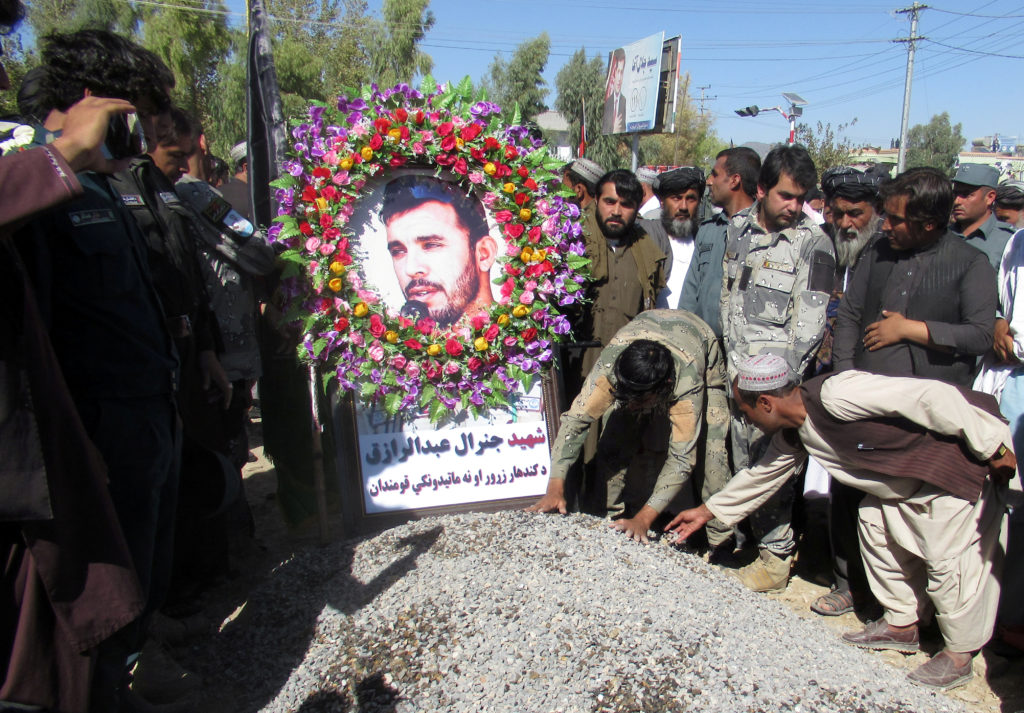 People attend a burial ceremony of General Abdul Razeq, the Kandahar police commander who was killed in an attack in Kandahar province. Photo by REUTERS/Ismail Sameem

The recent appointment of former U.S. ambassador to Afghanistan Zalmay Khalilzad as envoy for Afghan reconciliation was intended to energize the U.S. peace effort and coax the Taliban into direct talks with the government of Ashraf Ghani.

The Taliban said its political representatives in Qatar met with Khalilzad a week ago, during his first multination trip since he took up his new post. The State Department did not confirm the Oct. 12 meeting, but did not deny it either, which was widely viewed in Washington as tacit acknowledgement it happened. A similar scenario played out in July, when the Taliban reported a meeting with the senior U.S. diplomat for South and Central Asia, Alice Wells.

The risk of such back-channel talks is that could alienate Kabul. The Taliban claimed the two sides discussed finding a way to withdraw foreign forces from Afghanistan — an issue that the Afghan government would demand a say in as it would be key to any peace settlement. Since U.S. officials haven’t confirmed that the meeting happened, they have not been able to publicly deny the Taliban’s account of the meeting.

Aside from the rising violence, the quiet diplomacy is playing out against an unpredictable political backdrop in Afghanistan that could grow more turbulent in the weeks ahead.

The Taliban have condemned the elections, calling them a U.S.-manipulated event to further their hold on the country, and vowed to disrupt them. Militant attacks have killed seven candidates, and two other candidates have been abducted. Dozens of other people have died in attacks on election rallies.

The election for the 249-seat lower house is already three years overdue, and electoral authorities are battling both against deteriorating security and time to get polling centers ready for Saturday, using new biometric equipment intended to stop fraud that has plagued past elections. The U.S. has committed nearly $80 million in aid for U.N.-led support of Afghan election authorities.

Voting in southern Kandahar province has been postponed for a week because of Thursday’s attack and will not take place at all in Ghazni, in the east, because of insecurity there.

Laurel Miller, a former U.S. envoy for Afghanistan and Pakistan and now at Rand Corp., said disputes will inevitably arise among candidates over the results and that could hamper preparations for a presidential election scheduled for next April, which is far more consequential in Afghanistan’s highly centralized political system.

That could undermine the standing of the electoral authorities and cause political instability that will be exploited by the Taliban. “That’s not a great environment for negotiating a peace agreement,” she said.

Associated Press writers Deb Riechmann in Washington and Robert Burns in Singapore contributed to this report.