Two months after his arrest in North Korea, a U.S. college student confessed to committing a crime against the country in a dramatic news conference held in Pyoungyang on Monday. It’s unclear whether the 21-year-old was coerced into giving the tearful apology.

At the government-arranged news conference, Otto F. Warmbier, an undergraduate student at the University of Virginia, said that he tried to steal a banner adorned with a political slogan from Yanggakdo International Hotel on January 1. The following day, Warmbier was detained in Pyongyang, according to Gareth Johnson of Young Pioneer Tours last month. The China-based travel agency had organized his trip.

“I have made the worst mistake of my life,” a sobbing Warmbier said Monday.

In January, the state-run Korean Central News Agency said Warmbier was detained for committing a “hostile act,” but did not provide specific details of what he had done.

“I hope the fact that he has conveyed his sincere apology for anything that he may have done wrong will now make it possible for the [Democratic People’s Republic of Korea] authorities to allow him to return home,” said his parents, Fred and Cindy Warmbier, in a statement released Monday. They urged “the DPRK government to consider his youth and make an important humanitarian gesture by allowing him to return to his loved ones.” 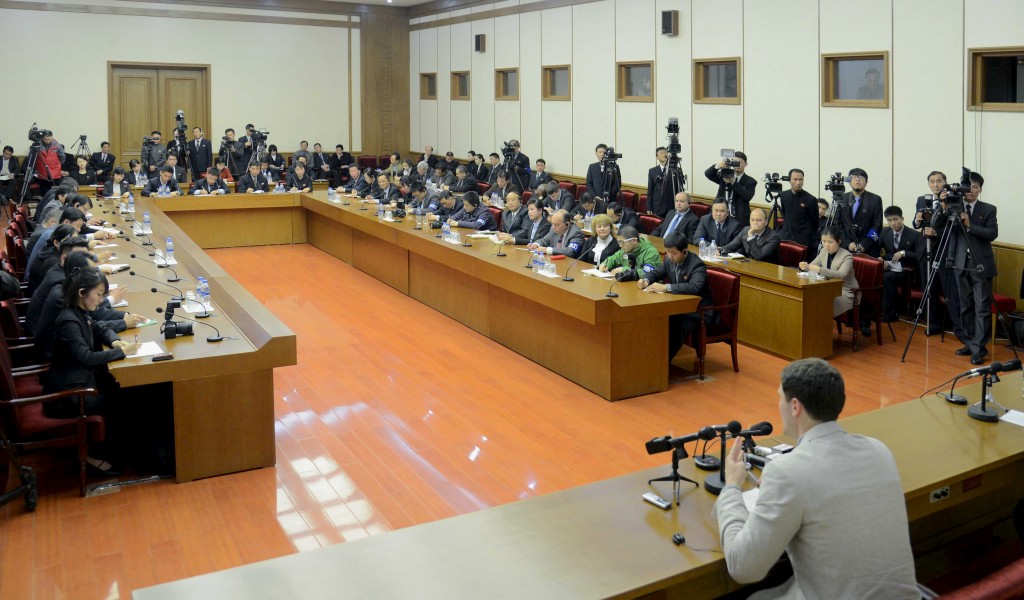 U.S. student Otto Warmbier speaks at a news conference in this undated photo released by North Korea’s Korean Central News Agency (KCNA) in Pyongyang. Warmbier, held in North Korea since early January, was detained for trying to steal an item bearing a propaganda slogan from his Pyongyang hotel and has confessed to “severe crimes” against the state, the North’s official media said on Monday. Photo by KCNA via Reuters

In his statement, Warmbier said he tried to steal the political banner because a member of the Friendship United Methodist Church in his hometown in Wyoming, Ohio, offered him a $10,000 used car for the deed. He also said he was promised that $200,000 would be paid to his mother through donations if he was detained North Korea and failed to return.

Warmbier said he accepted the church member’s offer because it his family faced “severe financial difficulties” and it was a “golden opportunity to earn money.”

Warmbier also said a secret philanthropy group called the “Z Society” at UVA had also urged him to complete the act.

A senior pastor at the church in question told CNN that he didn’t know who encouraged Warmbier to take the political banner, adding that Warmbier wasn’t a member of his church. A Z Society member also told CNN that the group never had contact with Warmbier.