WASHINGTON — American warplanes struck an Islamic State training camp in Libya near the Tunisian border Friday, and a Tunisian described as a key extremist operative probably was killed, the Pentagon announced. In Libya, local officials estimated that more than 40 people were killed with more wounded, some critically.

In a written statement, Pentagon press secretary Peter Cook said the training camp was near the Libyan town of Sabratha and that the targeted extremist was Noureddine Chouchane, a Tunisian national whom Cook called “an ISIL senior facilitator in Libya associated with the training camp.”

Another U.S. official said up to 60 militants were present at the camp at the time of the strike by U.S. Air Force F-15E strike aircraft based in Europe.

Cook said Tunisian officials in May 2015 had named Chouchane as a suspect in a March 18, 2015 attack on the Bardo Museum in Tunis.

“He facilitated the movement of potential ISIL-affiliated foreign fighters from Tunisia to Libya and onward to other countries,” Cook said.

“Destruction of the camp and Chouchane’s removal will eliminate an experienced facilitator and is expected to have an immediate impact on ISIL’s ability to facilitate its activities in Libya, including recruiting new ISIL members, establishing bases in Libya, and potentially planning external attacks on U.S. interests in the region,” Cook added.

Another official said the U.S. believes that Chouchane was killed. The official, who spoke on condition of anonymity to describe details of the sensitive operation, said it did not herald the start of a sustained U.S. air campaign in Libya but rather was an example of opportunistic strikes targeting key Islamic State operatives.

A witness in the city said he heard two explosions at 3:30 a.m. coming from the nearby village of Qasr Talel. He said the house that was targeted belongs to Abdel-Hakim al-Mashawat, known locally as an Islamic State militant, he said. He spoke on condition of anonymity because he feared for his safety. The official Facebook page of the Sabratha local city council also put the death toll at more than 40 with more wounded, some critically. “There are torn body parts buried under the rubble,” it said in a posting. It noted that the victims were not all Libyans. The witness said he saw a hospital list that noted victims were from Tunisia and Algeria as well as Libya.

Sabratha is one of the main launching points for smugglers’ boats heading to Europe. It has been also a transit point for Tunisians and North African jihadists before joining the Islamic State affiliates in their strongholds in central city of Sirte and the eastern cities such as Benghazi.

President Barack Obama earlier this year directed his national security team to bolster counterterrorism efforts in Libya while also pursuing diplomatic possibilities for solving its political crisis. U.S. officials had said they were holding off on sustained military action against Islamic State targets in Libya until a government was formed, a process that is still incomplete

On Sunday, a U.N.-designated council presented a new 18-member Libyan cabinet in the Moroccan city of Skhirat, weeks after an earlier lineup was rejected. The internationally recognized parliament has to endorse the new unity cabinet. If approved, the new unity government could eventually seek international military intervention against Islamic State extremists who have taken advantage of the country’s political vacuum since 2014.

One U.S. official said Friday’s airstrike was taken “with the knowledge of Libyan authorities,” but the official would not be more specific about the coordination.

The U.S. military has been closely monitoring Islamic State movements in Libya, and small teams of U.S. military personnel have moved in and out of the country over a period of months. In November, a US military airstrike killed an Islamic State leader called Abu Nabil or Wissam al-Zubaydi, an Iraqi national in the eastern city of Darna. In July, airstrikes targeted an al-Qaida gathering and officials said they targeted bel-Mokhtar but it was a failed operation in the eastern city of Ajdabiya. 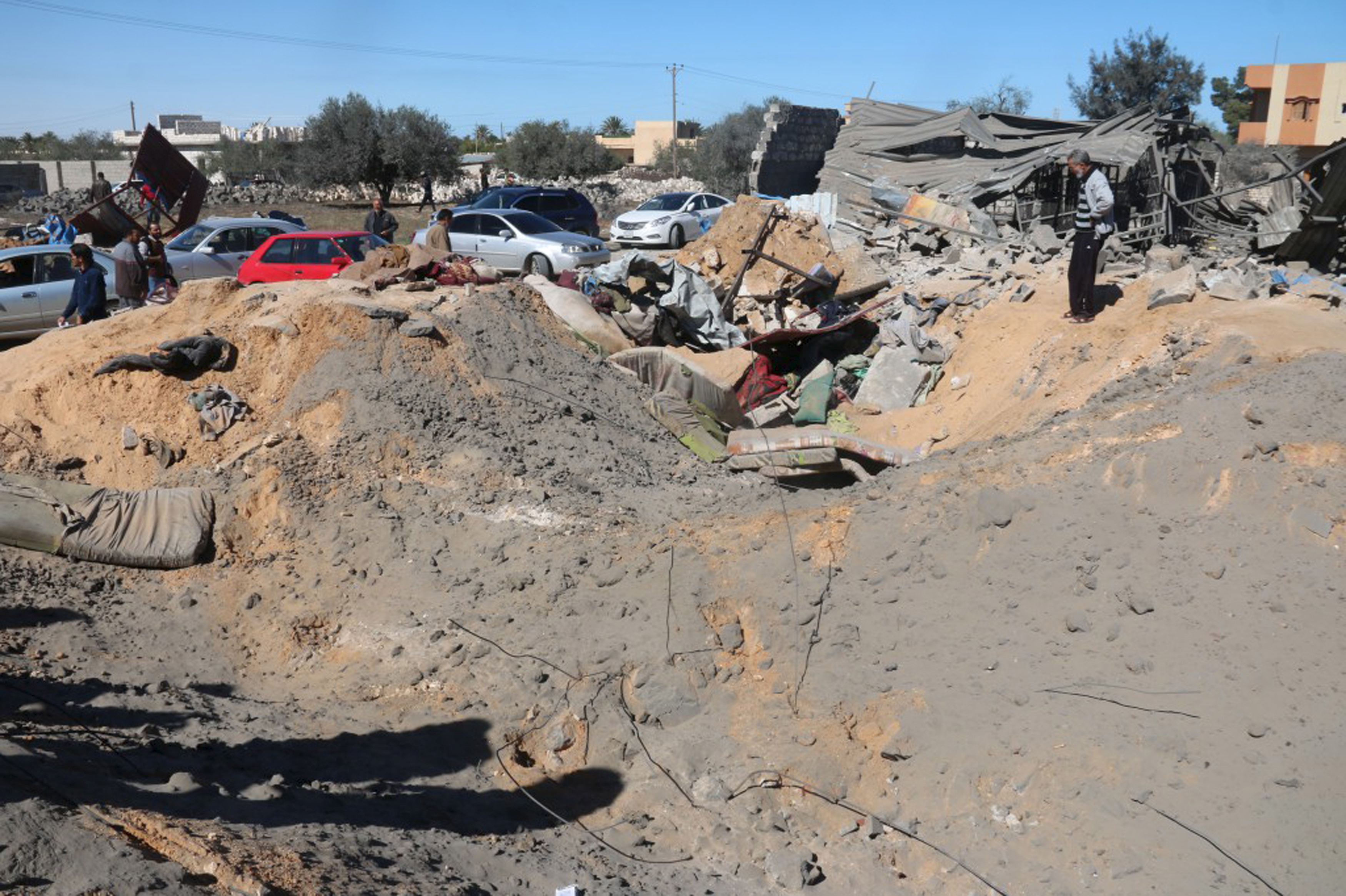 A view shows damage at the scene after an airstrike by U.S. warplanes against Islamic State in Sabratha, Libya, in this handout picture. Photo provided by Sabratha municipality media office/Handout

British, French and Italian special forces also have been in Libya helping with aerial surveillance, mapping and intelligence gathering in several cities, including Benghazi in the east and Zintan in the west, according to two Libyan military officials who are coordinating with them. The Libyan officials spoke on condition of anonymity recently with The Associated Press on this matter because they were not authorized to speak to the press.

U.S. officials predicted early this month that it would be weeks or longer before U.S. special forces would be sent, citing the need for more consultations with European allies. Additional intelligence would help refine targets for any sort of military strikes, but surveillance drones are in high demand elsewhere, including in Syria, Iraq and Afghanistan.

Adding to the concern in Washington and Europe is evidence that the number of Islamic State fighters in Libya is increasing – now believed to be 5,000 – even as the group’s numbers in Syria and Iraq are shrinking.

“I have been clear from the outset that we will go after ISIS wherever it appears, the same way that we went after al Qaida wherever they appeared,” President Barack Obama told reporters on Wednesday.

“We will continue to take actions where we’ve got a clear operation and a clear target in mind,” he said. “And we are working with our other coalition partners to make sure that as we see opportunities to prevent ISIS from digging in, in Libya, we take them. At the same time, we’re working diligently with the United Nations to try to get a government in place in Libya. And that’s been a problem.”

Left: A view shows damage at the scene after an airstrike by U.S. warplanes against Islamic State in Sabratha, Libya. Photo provided by Reuters/Sabratha municipality media office/Handout