To the Rev. Joseph Serwadda, Uganda’s anti-homosexuality legislation is as much a product of resentment against Western influence and donor interference as it is against the country’s gay population. 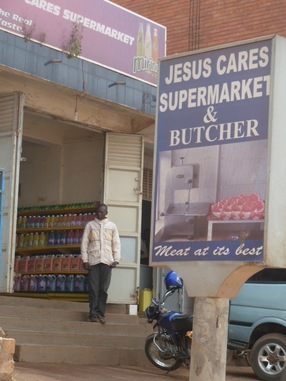 Serwadda, who leads an alliance of evangelical ministers, believes “gay-ism” is a chosen lifestyle, an opinion widely shared in this nation where piety is loudly on display in churches and even on the shingles of businesses (see photo at right). Serwadda blames activists in the West for extricating Uganda’s gays out of the closet. Despite widespread abhorrence of their “sinful” lifestyle, he insists, they always were left alone.

Uganda’s anti-homosexuality legislation, with penalties as severe as the death, was introduced in 2009 and seemed to go into hiatus after it was condemned by a number of donor governments to this heavily dependent east African country.

The bill’s re-emergence this year is a direct, defiant result of the recent Obama administration move to use foreign aid to push gay rights. “Gay rights are human rights,” declared Secretary of State Hillary Clinton.

How Uganda’s legislation fares this time around is anyone’s guess. As journalists “parachuting in” to cover it, our recent experience may well serve as a proxy for how the legislation — or homosexuality in general — has become a third rail nobody wants to touch.

The bill’s author, David Bahati, agreed to an interview when finally reached on his cell phone. Perhaps he just wanted to get rid of the call. He neither showed up nor answered the phone after that. The U.S. Embassy declined our request for an interview. We were able to talk to Uganda’s most prominent gay rights activist, Frank Mugisha, but you’ll find no pictures in our report of any social congregation in Uganda’s LGBT community. We were told there are no usual hangouts or clubs any more in a country where the proposed legislation would penalize not just being homosexual but also a failure to report such individuals.

Our fixer was no help. For parachute journalists like my team (producer Nikki See and cameraman Tom Adair), fixers play a critical role. Usually experienced local journalists, fixers use their connections to set up a story before you arrive — pursuing all angles and finding alternatives; a different member of Parliament in place of Bahati, for instance.

Unfortunately, we arrived in Uganda to few such arrangements and no back-ups. We agreed to separate with our fixer about halfway into the shoot but disagreed on how much he should be paid. I offered 50 percent of the fee agreed upon in advance. He demanded full payment. Otherwise, he warned, he would report us to the police.

The next day, we were indeed summoned to Kampala’s main police station, to what became a kind of small claims court. Here our fixer played an ace.

“They’ve come to do the homosexuals story,” he began, a politically astute caricature of his antagonists, with a clear implication in the tone: Here’s yet another group of Westerners obsessed about gay rights.

We’ll never know whether or how much it might have influenced the presiding police officer.

“You guys better settle this,” he instructed, or he would have to register a case. The subtext here was unmistakable: Our passports would be impounded until such a case was settled in court, a process of weeks or longer.

We settled, meeting halfway between our respective figures.

I was glad to scrape the police room experience from the bottom of my shoe and doubly appreciative of Mugisha and Serwadda for making our story possible with clearly articulated — and starkly different — opinions.