LONDON (AP) — In a major blow to Prime Minister Boris Johnson, Britain’s highest court ruled Tuesday that his decision to suspend Parliament for five weeks in the crucial countdown to the country’s Brexit deadline was illegal.

The unanimous, strongly worded Supreme Court judgment declared the order to suspend Parliament “void and of no effect.” The court found Johnson acted to limit debate on Brexit in violation of Parliament’s constitutional role.

The landmark decision immediately prompted calls for Johnson to quit.

He said Johnson should resign “and become the shortest serving prime minister there’s ever been.”

“I invite Boris Johnson, in the historic words, to consider his position,” Corbyn told the party faithful.

The harsh tone of the court’s decision, and the unanimous vote of 11 Supreme Court judges, led many to say Johnson can’t carry on.

“His position is untenable and he should have the guts for once to do the decent thing and resign,” Scottish National Party legislator Joanna Cherry said outside the court. 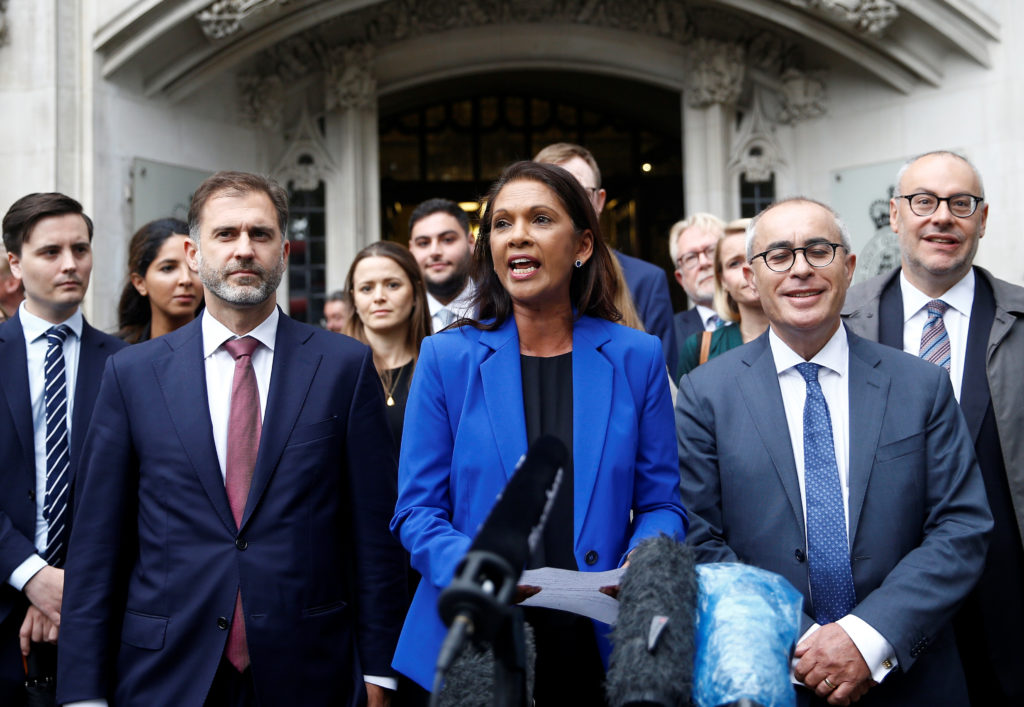 Anti-Brexit campaigner Gina Miller talks to the media after the Supreme Court of the United Kingdom hearing on British Prime Minister Boris Johnson’s decision to prorogue parliament ahead of Brexit, in London, September 24, 2019. Photo by Henry Nicholls/Reuters

Johnson is traveling in New York for the U.N. General Assembly and hasn’t commented yet on the adverse ruling. He had said earlier he would comply with the court’s decision.

Supreme Court President Brenda Hale said the suspension “was unlawful because it had the effect of frustrating or preventing the ability of Parliament to carry out its constitutional functions without reasonable justification.”

She said the court’s decision means Parliament was never legally suspended and is technically still sitting.

House of Commons Speaker John Bercow said in a written statement that the ruling “vindicated the right and duty of Parliament to meet at this crucial time to scrutinise the executive and hold Ministers to account.”

He said lawmakers “must convene without delay. To this end, I will now consult the party leaders as a matter of urgency.”

Some legislators said Parliament should resume its session Wednesday morning, with a possible Prime Ministers Question session with Johnson, which is traditionally held on Wednesdays.

In this nation without a written constitution, the case marked a rare confrontation between the prime minister, the courts and Parliament over their rights and responsibilities.

It revolved around whether Johnson acted lawfully when he advised the queen to suspend Parliament for five weeks during a crucial time frame before the Oct. 31 Brexit deadline when Britain is scheduled to leave the European Union.

Johnson has refused to say whether he will resign if he is found to have broken the law, or will seek to shut down Parliament again.

The court rejected the government’s assertions that the decision to suspend Parliament until Oct. 14 was routine and not related to Brexit. Government lawyers claimed that under Britain’s unwritten constitution, it is a matter for politicians, not courts, to decide.

The government’s opponents argue that Johnson illegally shut down Parliament just weeks before the country is due to leave the 28-nation bloc for the “improper purpose” of dodging lawmakers’ scrutiny of his Brexit plans.

They also accused Johnson of misleading the queen, whose formal approval was needed to suspend the legislature.

Johnson and Parliament have been at odds since he took power in July with the determination to take Britain out of the EU on Oct. 31 with or without a divorce deal with Europe.