The warning came hours after the U.N. Security Council unanimously approved a resolution renewing the mandate of a U.N. office in the troubled Caribbean nation and calling on all countries to stop the transfer of small arms, light weapons and ammunition to anyone there supporting gang violence and criminal activity.

U.N. humanitarian agencies said they were ready to help embattled communities once it is safe to do so, and Jeremy Laurence, spokesperson for the U.N.’s High Commissioner for Refugees, laid out those dangers.

“We have so far documented, from January to the end of June, 934 killings, 684 injuries and 680 kidnappings across the capital,” he said Saturday. In addition, “Over a five-day period, from 8-12 July, at least 234 more people were killed or injured in gang-related violence in the Cite Soleil area of the city.” 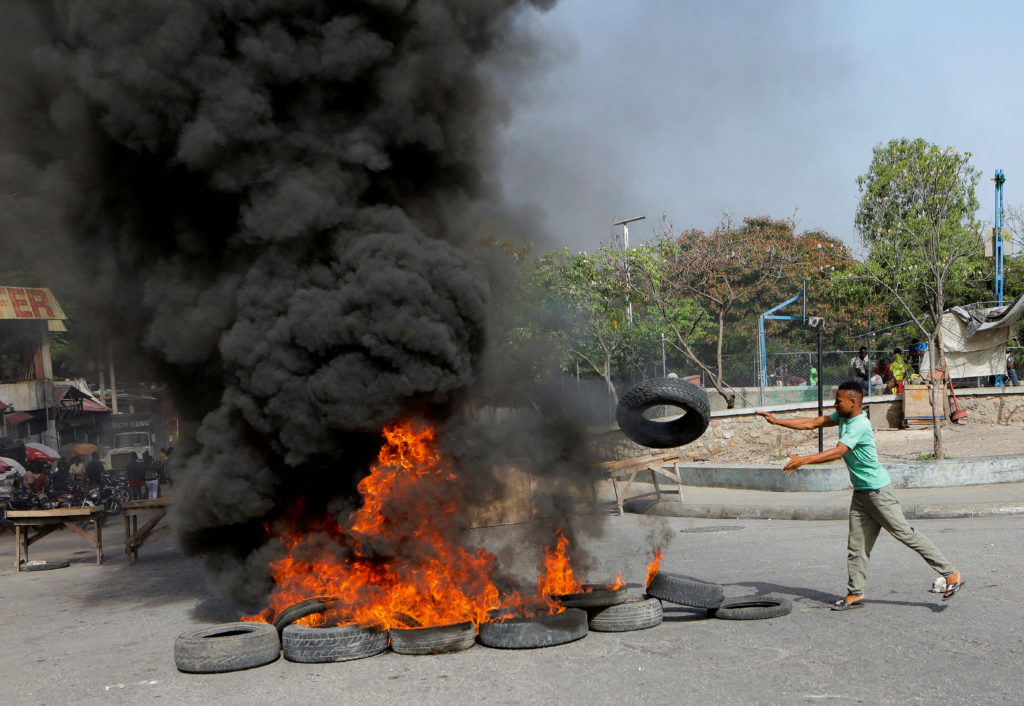 A demonstrator throws a tyre on a burning road block as anger mounted over fuel shortages that have intensified as a result of gang violence, in Port-au-Prince, Haiti, July 13, 2022. REUTERS/Ralph Tedy Erol REFILE – QUALITY REPEAT/File Photo

He said most of the victims “were not directly involved in gangs” but were targeted by them.

Separately, the U.N,’s humanitarian affairs office reported that 99 of the recent casualties in Cite Soleil were deaths.

Laurence called on gangs to halt the violence, while also urging Haitian authorities to ensure that fundamental human rights are “placed at the front and center of their responses to the crisis. The fight against impunity and sexual violence, along with the strengthening of human rights monitoring and reporting, must remain a priority”, he said.

The Security Council resolution drafted by the United States and Mexico was approved 15-0 Friday. It demanded an immediate cessation of gang violence and criminal activities — a point stressed by China.

The gpvernment, he said, has a duty to protect citizens’ right to life even from threats that come from private entities.

The U.N. agencies said some gangs even deny access to drinking water and food in order to control the population, aggravating malnutrition.

A year after the unsolved assassination of President Jovenel Moïse, gang violence has grown worse and many Haitians have tried to flee a country that seems to be in economic and social freefall. Attempts to form a coalition government have faltered, and efforts to hold general elections have stalled.

The United Nations has been involved in Haiti on and off since 1990, and the last U.N. peacekeeping mission was in the country from 2004 until October 2017. The political mission now there advises Haiti’s government on promoting political stability and good governance.

Left: Police clear the street as demonstrators burned tires to protest ongoing fuel shortages even as Haiti's main fuel terminal renewed deliveries that had been suspended due to an outbreak of gang violence, in Port-au-Prince, Haiti July 14, 2022. Photo by Ralph Tedy Erol/Reuters.