He has moved quickly to consolidate his position since lawmakers elected him this week to finish the term of his predecessor, ousted President Gotabaya Rajapaksa. In the wee hours Friday, army troops and police forcefully cleared the capital’s main protest site of demonstrators who had occupied it for months, angry over the country’s economic collapse.

On Friday, he appointed a classmate and ally of Rajapaksa, Dinesh Gunawardena, to be his prime minister and partner in rescuing the country from its predicament. The question is whether they can muster the political heft and public support to get the job done.

Even his critics respect Wickremesinghe for his perseverance.

“If you are broken down and think you can’t get what you want just look at a picture of Ranil Wickremesinghe,” said lawmaker Udaya Gammanpila, who supported Wickremesinghe’s main rival in the presidential vote.

Wickremesinghe is a divisive figure, unpopular among Sri Lankans fed up with shortages of food, fuel and medicine. Last week, protesters burned his private residence to the ground.

He’s as well qualified as anyone after nearly a half-century in politics, but it’s unclear that the wiles that kept him head of his party for most of that time will suffice to overcome a tide of public antagonism. Few view Wickremesinghe as a real change from the government that was toppled earlier this month when Rajapaksa fled the country as angry crowds stormed his office.

Born into a wealthy, politically active family whose fortune was made in timber and the media, Wickremesinghe trained as a lawyer and was elected to Parliament for the first time exactly 45 years before he took the oath of office Thursday.

In coming days, he is expected to make a major policy speech laying out plans for fixing Sri Lanka’s dire economic, humanitarian and political crisis.

Speaking just after he was pronounced the winner of Wednesday’s secret ballot in Parliament, Wickremesinghe urged fellow lawmakers to unite in saving the nation.

“People are not expecting the old politics from us, they expect us to work together,” he said.

Meanwhile, out on the streets, protesters were chanting, “Ranil, go home!”

Over the years, Wickremesinghe has moved in and out of the prime minister’s office as his United National Party gained and lost power. But he coveted the top post, where the real power lies, running for office twice, in 1999 and 2005.

In 2020, Wickremesinghe’s party splintered and suffered a humiliating defeat in national elections. He became its sole representative in Parliament, appointed rather than elected to his seat based on the proportion of votes. Detractors argued he lacks any mandate.

In May, Rajapaksa turned to Wickremesinghe to replace his brother Mahinda Rajapaksa as prime minister after Mahinda was forced to quit. 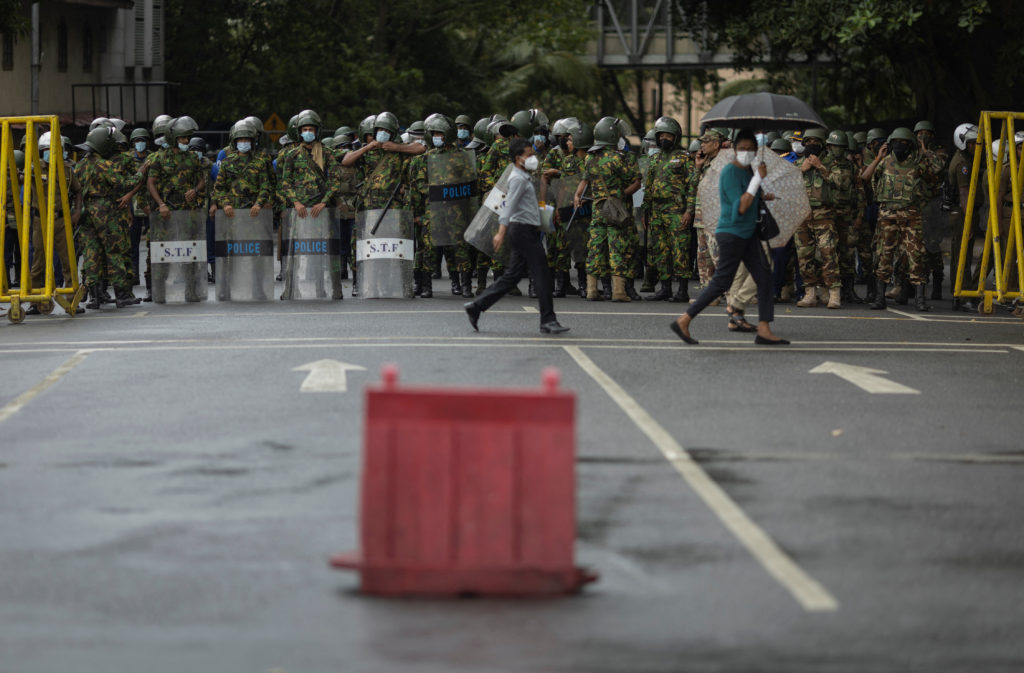 Security personnel stand guard during a protest against the raid on an anti-government protest camp early on Friday, amid the country’s economic crisis, near Presidential Secretariat in Colombo, Sri Lanka July 22, 2022. Photo by Adnan Abidi/Reuters.

The hope was to restore Sri Lanka’s international credibility after it stopped making payments on its $51 billion in foreign debt when its foreign reserves dwindled perilously low, and Wickremesenghe has been leading negotiations with the International Monetary Fund on a bailout.

But critics accuse him of protecting members of the Rajapaksa family, who are widely blamed for leading the nation into ruin, from allegations of corruption and other wrongdoing.

Rajapaksa’s resignation led to Wickremesinghe becoming acting president, in addition to prime minister and finance minister. His assurances that he would restore order and severely punish protesters who had attacked politicians’ homes during the unrest won him support from dozens of lawmakers loyal to Rajapaksa.

He cannot afford to seem soft on security: Islamic State-inspired terrorist bombings that killed 260 people in 2019 were largely blamed on intelligence failures stemming from fractured communication and friction between Wickremesinghe, then prime minister, and then-President Maithripala Sirisena.

Tourism was devastated. Then came the pandemic.

During his lengthy career, Wickremesinghe has headed various government ministries, as has his new prime minister, Gunawardena.

Gunawardena earned a business degree in the U.S. and worked in New York before returning to Sri Lanka when his father, Philip, who helped lead Sri Lanka to independence from Britain, died.

Wickremesinghe has become the public face of Sri Lanka’s crisis, delivering weekly addresses in Parliament, raising taxes and pledging to overhaul a government that increasingly has concentrated power under the presidency — a trend that many believe helped tip the country into its current predicament.

It’s unclear if, now that he has gained the long-sought presidency, Wickremesinghe will back reforms to curb its powers.

He has been known to take the initiative at critical moments.

In 2002, he tried to end a yearslong civil war, signing a Norway-brokered peace agreement with rebels who were fighting to create an independent state for the ethnic Tamil minority. The cease-fire won Wickremesinghe international acclaim, enabling him to salvage an economy on the brink of collapse after Tamil Tiger fighters attacked the island’s only international airport and destroyed many aircraft.

But the pact angered Sinhala Buddhist nationalists who saw it as a betrayal, and the cease-fire failed to hold. Then-President Chandrika Kumaratunga sacked Wickremesinghe and his Cabinet and called an election, which his party lost.

Wickremesinghe ran for president the next year, losing to nationalist Mahinda Rajapaksa. In 2009, Rajapaksa defeated the Tamil Tigers, becoming a national hero in the eyes of the majority Sinhala Buddhists. During most of the years since then, the Rajapaksa family has dominated Sri Lankan politics, appointing family and friends in key political and administrative positions.

Wickremesinghe tends to keep his private life under wraps. He is married to Maitree Wickremesinghe, a professor and expert on gender and women’s studies.

Left: Ranil Wickremesinghe is sworn in as new president of Sri Lanka by Chief Justice Jayantha Jayasuriya at the parliament, amid the country's economic crisis, in Colombo, Sri Lanka July 21, 2022. Sri Lankan President's Office via Reuters.