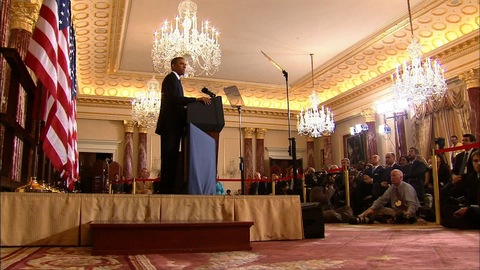 MANAMA, Bahrain | President Obama’s speech Thursday night was intended to send a message to the Bahraini monarchy — and its beleaguered opposition — that U.S. interests in the Gulf will not trump its commitment to democratic change forever.

The Shia-led opposition and democracy advocates here have accused the U.S. of following a double standard toward Bahrain as compared to the way it reacted to uprisings in Egypt, Tunisia, Yemen and Syria.

Since pro-democracy protests erupted three months ago, Bahrain’s ruling family has declared a state of emergency, backed up by Saudi troops, and imposed a harsh crackdown, with mass detentions of Shia professionals. Many of those released report suffering abuse and even torture.

This tiny Persian Gulf kingdom, home to the U.S. Navy’s Fifth Fleet and critically close to Saudi Arabia and Iran, is a longtime U.S. ally. Bahraini and Saudi officials warn that granting full political power to Bahrain’s two-thirds majority Shia could ignite unrest among Shiites in Saudi Arabia’s oil-rich Eastern Province, just a short boat-ride away. Saudi Arabia is America’s most vital partner in the Gulf.

But on Thursday, for the first time, President Obama called the Bahraini government out. “Mass arrests and brute force are at odds with the universal rights of Bahrain’s citizens and will not make legitimate calls for reform go away,” he said.

In an interview before I left for Bahrain last week, I asked Assistant Secretary of State Jeffrey Feltman — who’s been virtually shuttling between Washington and Bahrain over the last three months — about the charge of a U.S. double standard: Feltman insisted he and others have been pressing the Bahrainis privately to ease up. Here’s what he had to say:

MARGARET WARNER: Now as you know, many of the activists accuse the U.S. of hypocrisy, or at least a double standard. They say that the U.S. has not been forward-leaning about the need to engage with the opposition to the crackdowns in Bahrain as they were in Egypt and Tunisia. What do you say to that?

JEFFREY FELTMAN: I would say that our private message and our public message has been the same to the Bahrainis and they’ve mirrored what we’ve said throughout the region. We have called for political, economic, social reform across the region and including in Bahrain. We believe strongly and we have said this that the Bahraini people, like people throughout the region, have some legitimate demands. They are asking to play a role in the decisions that affect their daily lives; they are asking to be able to make a contribution to how their government. These are legitimate demands and we have made it clear to Bahrainis, the Bahraini officials when we have seen human rights abuses, when we have disagreed with their analysis. Bahrain is an old friend. The Bahraini government and the American government have worked together on many political issues over the years. I fully expect for this partnership to continue. But we have certain principles that we have absolutely made clear that we expect our friends to uphold.

MARGARET WARNER: Are you saying that you think there’s been no difference in tone from the U.S. government about what has been going on in Bahrain than there was about what was going on in Egypt and Tunisia?

JEFFREY FELTMAN: I’m saying that there is a basic consistency in what the message is. You know every country in the region has its own set of circumstances. Our bilateral relationships with every country in the region are based on history with the mutual interest of that country. So there’s no one-size-fits-all approach. But what there is a universal adherence to certain principles; of human rights of our firm belief, like the Secretary said back in January, that the status quo of that reform is not sustainable. The philosophy of our approach is the same throughout the region. The tactics were using depend on the circumstances of each country, of each bilateral relationship.

MARGARET WARNER: I just wanted to tell you something that a young human rights activist said to us, that we actually interviewed here. Members of her family are in jail. And she said, “The U.S. is directly complicit in the violations taking place in Bahrain right now because there’s been a lot more silence about these violations than there has been in other countries.” What do you say to her?

JEFFREY FELTMAN: You know, I’d say that, again, we have made our views clear. That in fact that our relationship with Bahrain, built-up over decades, has contributed to some of the more positives developments that we’re seeing unfolding now. I don’t want to paper over things. We still have big concerns. We want to see are these trials going to be conducted to standards of international judicial proceedings. We’re concerned with the disruptions of buildings associated with religious gatherings. We have greater concerns.

JEFFREY FELTMAN: We’re concerned about detention of medical facility personnel like I said earlier, which seems to be a contradiction to the medical (inaudible). These are things that we talk about with the Bahrainis, we press the Bahrainis on, and not only the Bahrainis; we talk with the others who have influenced on Bahrain as well. But were also trying to look to the future; you know how can we build the right atmosphere for the reconciliation of people they can trust. That is absolutely necessary to address the long-term stability of Bahrain.

After last night’s speech, Sheikh Ali Salman, leader of the largest opposition party Al Wefaq, told me he was “delighted” to hear the criticism of the detentions of opposition leaders and the destruction of Shia mosques. But Salman remained wary. “I am pleased with the whole speech, and now looking for the speech to be carried out in practice,” he said, adding “there shouldn’t be a different standard” for how the U.S. responds to uprisings in different countries.

Tellingly, the Bahraini government reacted even more warily. After a post-midnight meeting, the cabinet issued a statement through state media saying it “welcomed the principles contained in the speech,” and “highlighted that the Kingdom of Bahrain continued towards more reform in all fields and had responded to the false accusations and wrong information on all occasions. All procedures had always been and will continue within the constitutional and legal framework and in accordance with international standards with regards to the securing and preservation of human rights.”

Late Friday, a reform-minded Bahraini government official, speaking on condition of anonymity, said President Obama’s speech was a “lesson” for the regime: “What they’re telling us privately, they’re now ready to say publicly,” he said. “U.S. friendship does not mean they will stay silent forever.”

If the round-ups and military trials continue after the state of emergency lifts June 1, Bahrain’s democracy activists will be waiting to see how strongly the president and his team are committed to driving that “lesson” home.

Find all of Margaret Warner’s reports from Bahrain on our World page. Video edited by Larisa Epatko